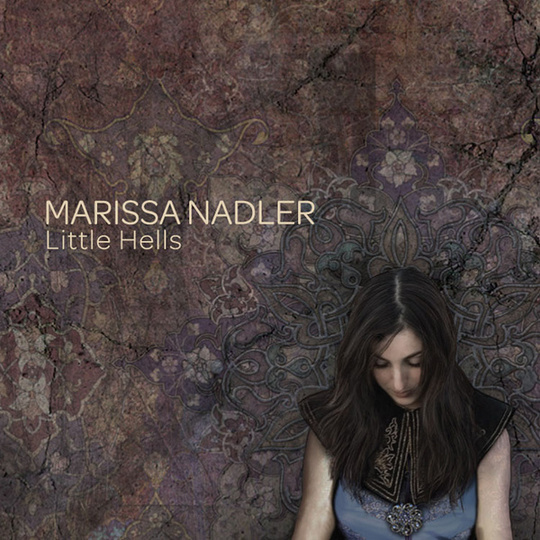 Bleak Bostonian songstress Marissa Nadler has been a very impressive artist for a good few years now, ghosting out from the rafters at regular intervals to deliver installments of the eerie trilogy of albums that began with 2004’s Songs Of Living And Dying and wrapped up with 2007’s Songs III: Bird On The Water. She's nothing if not singular: her high, frightening trill, Edgar Allen Poe-ish storytelling and textured approach to what you might loosely call folk make for a formidable combination, her songs conjuring exquisite vistas of crumbling splendour and rotted Victoriana. Still, for all their choking beauty, those first three records were more atmospherics wholes than end to end killer songs, intensely evocative, but not exactly visceral.

Little Hells is different. Little Hells is like the bit in Ring when the spooky drowndey girl climbs out of the TV and you realise she's harder than you thought. As in, a lot harder. Where before Nadler's darkened daydreams, dissonant acoustic weaves and elegant turns of phrase drifted somewhat hazily, here they’re concentrated into fuel for the ten best songs she’s ever written, beautiful and merciless as diamond bullets.

"I believe you’re filled with s-s-s-sin," she hisses over 'Loner''s out of control carnival organs, "like me". The antique electronics are something new, but they’ve not idle experimentation; the song's malign whisper in the dark needs something more than the lush drifts of old to back it, and as with near enough every track on Little Hells, Nadler has upped her musical game accordingly. If the solo acoustic shows she played in support of Songs III showed those tracks could survive easily enough without their weirder sonic layers, here lyric, voice and music exist in chilly synthesis. Often guitar is discarded entirely: 'Mary Come Alive' is built on the disorientating sound of a delicate drum machine pattern being stalked by a much louder live figure, while in the centre of the chaos Nadler darkly mutters "I know we had a beautiful life, but things changed"; 'The Hole Is Wide' glides forward on two sad piano notes, the downward spiral of its lonely protagonist – left alone after "the man she loved best... died in a fiery crash" - matched by the ripples of distortion that slowly shred it to nothing over the course of the final minute.

Conversely, she's now not afraid to reign things in where once she’d have over-layered. The title track is a dreamy country strum over which she paints a portrait of a heartbroken recluse (the record's recurrent lyrical theme), guitar adorned by nothing more than a few keys, the hookline a simple, wistfully drawn out "she says"; 'Ghosts And Lovers' is just a quiet arpeggio cradling her searingly sad declaration "ghosts and lovers will haunt you for a while, from the stars and from the sheets and from the ground"; on the woozy 'Mistress' she sounds almost happy, accepting the ultimate outsider role as she lays down into a bendy sea of slide guitar, sighing "it’s strange to end up this way".

In the past it's been all too easy to revel in Marissa Nadler's astonishing voice, roll in the washes of reverb and off key chiming, suck in those eloquently morbid lyrics and be bewitched by the feel of the songs, only without necessarily being walloped by any one individually. Here she’s hacked away the art school whimsy, tossed out the crystals and burned the floaty headscarfs, focussing her talents into ten razor sharp songs, some subtle, some vicious. After years of floating in the ether, Marissa Nadler has finally taken corporeal form. It’s exciting - if a little terrifying - to see what she's going to do with it.

[Please Note: We're not 100% sure the above is the cover of the record]

To Lose My Life