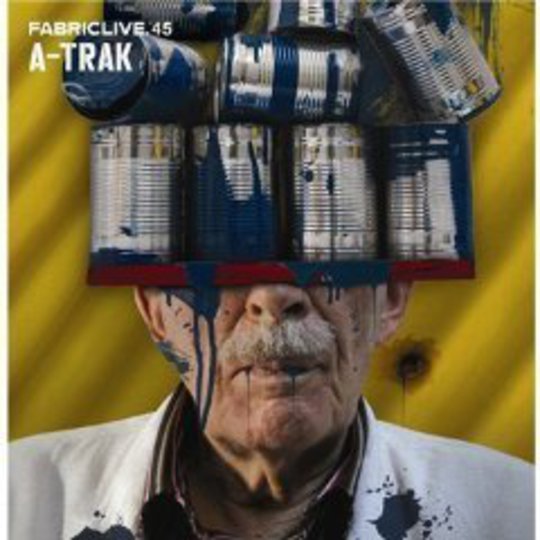 As five-time winner of the DMC World DJ Championship, youngest ever winner of the same, ex-member of the Invisibl Skratch Piklz, the Allies, and Kanye West's tour DJ to boot, A-Trak - Alain Maklovitch to his mother – comes to the FabricLive franchise with, oh, about 1,000-times the turntablist nous of your average house, techno, trance, drum & bass, dubstep or breakbeat DJ.

That said, dancing to a top scratchologist doing his or her thing gives you twisted blood, so the question is does framing his skills in a dancefloor-friendly context result in the dilution of one side of his talent in favour of the other?

On the evidence of FabricLive 45 the answer is no. Dropping straight into peak-time manoeuvres with a combination of his own 'Say Whoa', written for Nike's drug-music-meets-keep-fit Original Run series, and DJ Sneak's filtered house classic 'You Can't Hide From Your Bud', A-Trak immediately commences chopping in and out of tracks with frenetic dexterity, garnishing a throbbing 4/4 beat with flurries of scratching, samples and loops.

Bearing in mind that this is not a mix laudable for its subtlety, some highlights include DJ Observer & Daniel Heathcliff's very decent remix of Robbie Rivera's very bad 'Move Move', Jamie Anderson & Content's 'Body Jackin' (an inspired tech-house update of Steve "Silk" Hurley's 1987 classic 'Jack Your Body'), the stress-inducing cowbell-meets-hoover bass of 'Church of Nonsense' by Daniele Papini, bumping juke house from DJ Gant-Man ('Juke Dat Girl From The Back'), and the brilliant proto-grime of DJ Zinc's '138 Trek', sounding as fresh today as it did on its release in 2000

Eclectic tracklistings are no surprise these days, particularly since nu-rave cosied up to the indie scene a few years back and programs such as Ableton facilitated seamless mixing between electronic productions and ever-fallible human drumming. What A-Trak brings to the hyperactive confection of house, techno, Bmore, indie disco and UK garage to be found here, however, is an emphasis on how to thread these records together into a coherent whole. Juxtaposition has its place but it gets tired very quickly, and a DJ who knows how to get from A to D via C and D will always impress more than one who leaps from between them without paying heed to the intervening stages.

Thus, we have the mix's introductory bassy stompers broken up first by the house version of grime artist Skepta's calypso-sampling 'Sweet Mother', and then the Bmore groove of 'The Ish' by DJ Class. With the move made from upfront speaker damage to a more lissom vibe, Diskjokke's sultrily deep remix of Metronomy's 'Heartbreaker' slips into place with aplomb.

The transitions between tracks are, in hip-hop style, frequently more staccato than flowing, which makes the intermittent lengthier mixes all the more enjoyable when they occur. The strident sirens of DJ Rob 3's faux-old-skool electro number 'The Chase' blend particularly beautifully with the glimmering synth stabs that open Aeroplane's version of the Friendly Fire's 'Paris'.

With a mix as diverse and with as many tracks as this one, there are bound to be choices that give individual listeners the hump. I'd happily see the playground chromatics of 'AA 24-7' by Dance Area consigned to a vacuum, or some similar noiseless place, while the disco-house moves of Voodoo Chilli's 'Get on Down' are more redolent of a Yates's Wine Lodge-style meat market than, say, a credible London club situated opposite a meat market. That's me, though, and to be fair A-Trak's style ensures the records he selects never hang around for long, anyway. Given that he remains a thoroughgoing hip-hop DJ in style if not in sensibility, most of these tracks are ripped through in less than three minutes. That brevity of play is another reason why the logic with which he picks his path through the mix is so important, and so impressive in its execution.