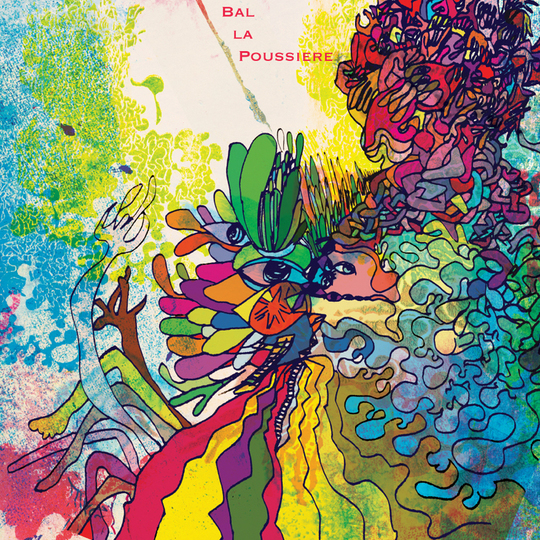 I sat down for the initial run through of Zun Zun Egui's EP Bal La Poussiere a little while back.

Twenty-two minutes later, I found myself sitting bolt upright on the sofa. The coffee I’d made untouched. My ladyfriend had been talking to me, but I hadn’t heard a word she’d said. Whatever it was was not enough to break the music’s hypnotic spell. I’d been lost for nearly half an hour. Such is the swirling, all encompassing effect of Zun Zun.

The Bristol outfit make a sound that should be impossible to conjure with four people, two guitars, keys and drums. It’s immense. It’s everywhere. Yet it’s so crystalline, and personal that it doesn’t just spin off into the ether; though it threatens to. God how it threatens to.

The EP kicks off in a manner akin to Dirty Projectors' recent opus 'Bitte Orca', only with Longstreth's African obsessions stretched to the nth degree by main man Kush. That he's of Mauritian descent should come as no surprise after the opening bars of music and frantic singing in tongues.

The Talking Heads comparison is a pretty apt one. There's an undeniable Remain In Light vibe to these extended, percussive jams, and occasionally the uninhibited, joyous speak singing takes on a Byrne-like timbre. The sound of a man that knows the answers to universal secrets and is tripping over himself trying to tell everyone all of them. At the same time.

Things are slightly loser here, however. It feels like the band are more interested in seeing where the music is going to take them (and the listener) than carving out the post punk Caribbean party jams that these tracks could've turned into in the hands of a lesser outfit.

The trick is in the rhythm section. With such solid backing from the drums and bass the guitars and synths are free to roam as many different avenues as each song will allow. Luckily the production here allows for each idea to be heard and enjoyed. It's as sharp and heady as spiced rum.

I have to admit I fucking love it when guitar is left to sound like guitar. When you're allowed to know that the sound you're hearing is a person playing an instrument. That the strings are wound steel and are being strummed by a plectrum. When every string scrape is left intact and not edited into oblivion. Beautiful, beautiful stuff my friends.

On the strength of this three track debut there's absolutely no reason why Zun Zun can't break out of their Bristol confines and take on the Yeasayers and Projectors of this world. Aye, as a Bristolian there's a certain amount of local pride at play here, but after hearing Bal La Poussiere, it's completely justified.