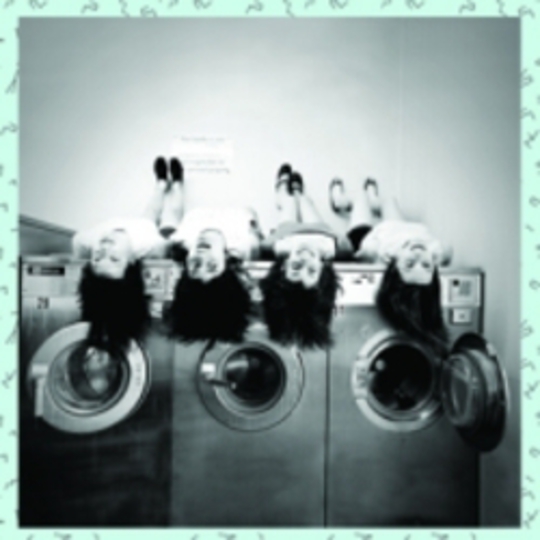 If the early Noughties (Christ, anyone care to join me in a clog-dancing bash atop the grave of that particular epithet this coming New Year’s Day?) threatened to smother us in lobotomising landfill indie, the latter portion has often felt as though every musician on the planet was frantically defibrillating us to the point of uncontrollable glassy-eyed drooling with variously glitch-ridden takes on spazcore freak-punk.

Now, with alarming speed, the pendulum has come full-swing: the sort of sounds that were routinely met with terror and confusion pre-watershed (Test Icicles, anyone?) barely raise an eyebrow today. Our toe-tapping, beard-stroking acquiescence to the very existence of bands as patently ludicrous as, say, Rolo Tomassi - and I love them, I really do - suggests we’re pretty much immune to all-guns-blazing excess as we stare vacantly down the barrel of the Decade For Which There Shall Be No Stupid Nickname.

And yet somehow, unassuming Austin foursome Finally Punk still manage to puncture my leathery, cynical hide with a hypodermic crafted from purest unrefined zeal. It’s something to do with the determinedly self-conscious rawness (the determinedly self-conscious shitness, if you were feeling less charitable) of it all that, when as well-aimed as this lot often manage, really hits home. Casual Goths is the musical equivalent of a swift knee to the trouser area in the midst of a mass shin-kicking contest: it’s hardly playing by the rules, and it feels sort of awful, but somehow it’s perversely refreshing.

Although Finally Punk stapled themselves haphazardly together in 2005, there’s something not entirely of-this-century about their shamelessly whittled back-bedroom aesthetic. For all the recent namechecks from Karen O, Beth Ditto and the like, it’s Carrie Brownstein, Ana Da Silva and Kathleen Hanna who loom largest over FP’s output. And, once you’ve been exposed to it, you can forgive them what looks at first glance like a rather hubristic and sneery name.

If we can agree that punk should be defined as an approach to music, rather than a genre of it, then this lot really do earn the right to wear the badge: to call the vast majority of Casual Goths ‘stripped down’ or ‘lo-fi’ would be akin to accusing the ocean of being ‘moist’. Truth be told, it’s not even a proper album in the strictest sense - much of this 26-track, 30-minute (yep, you read that correctly) offering has been out in one form or another before. The backbone is formed around a repackaging of their 2006 self-titled Wonk Records debut, augmented with the later Primary Colors and Hypertension EPs.

Clocking in at a relatively epic 1:07, 'Australia' kicks things off in suitably splenetic style. Over a ping-ponging bass riff, a reedy, borderline atonal vocal squawks something about “frying eggs in the back yard” and “rattlesnakes you gotta pee on.” It’s nigh-on impossible to tell who’s doing what, as Erin Budd, Elizabeth Skadden, Veronica Ortuno and Stephanie Chan tend to swap instruments roughly every other chord. It doesn’t really matter, to be honest. In the midst of having your nerves flayed to pieces by this musical cat o'nine tails, it’s hard to give a toss about assessing the comparative impact of each individual strand.

The breathless running order quickly takes on the aesthetic of a 26-lane motorway pile-up, with shattered fragments of one song seemingly strewn across the three or four either side of it. Highlights include the wry-leftism-meets-delusional-paranoia scream of 'What The Fuck, Missle?', which hits while you’re still bagging up the remains of 'Boyfriend Application' - a tongue-in-cheek but nonetheless faintly chilling invitation to love (or at least the preliminary interview) that rumbles and judders like an orgasmic brontosaurus. Somewhere in the middle of it all, light relief comes in the form of a reasonably straight (although hella shrieky, natch) cover of Nirvana’s 'Negative Creep' that sounds like it was recorded on a Dictaphone in a cave behind a waterfall.

The incongruity of it all is that many - well, some - of the shuddering rhythms and cheese-grating guitar lines swirling around in the maelstrom are deceptively well-crafted. Several of these tunes, in fact, would no doubt reveal themselves to be infectious in far more wholesome ways if they weren’t all delivered with such ragged, gleefully rabid ferocity. Although you’d never describe it as ‘heavy’, Casual Goths is a record for which it’s advisable to bite down on a leather strap before attempting to tackle it whole. Listened to at sufficient volume - an experiment I put myself through on a ten-minute walk to the pub, where I apparently arrived looking _“sort of chewed up”_ - the shrill abrasiveness of this four-girl attack can, on occasion, be a genuinely painful thing to experience.

At the same time, you can literally feel it doing you good, almost like an aural enema of ground glass and lemon juice that really scours away all the numb junk, leaving you squeaky clean and slightly traumatised. It’s the sort of death-or-glory, silver bullet panacea that should only really be available on prescription: take advantage of its over-the-counter status by all means, but don’t come crying to us when all other music seems terrifyingly contrived as a side-effect.

Reverend And The Makers

A French Kiss In The Chaos

Judy Sucks A Lemon For Breakfast