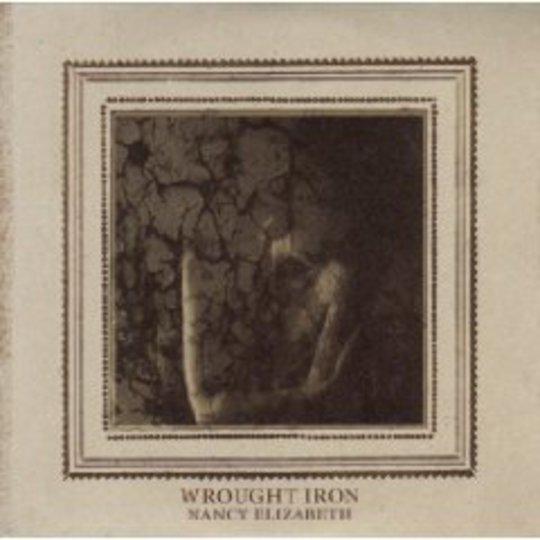 It’s impossible to deny the influence of the seasons on your musical listening habits over a year. As subtle weather shifts change the mood of the environment, so the sounds that accompany most trips out and about change, from the warm and humid atmospheres of mid-July through early September’s predictable bursts of daytime warmth. And so Nancy Elizabeth’s second album Wrought Iron feels almost pitch perfect for the current transition from the end of this pseudo-summer into the reality of October, as the sunny afternoons bleed almost imperceptibly through into a sudden autumnal crash.

Moving away from the harp-dominated textures of her appropriately named debut Battle & Victory – a gauntlet thrown down for this follow-up to match, which it does with aplomb – Wrought Iron sees Elizabeth continues to explore the possibilities of fleshing out the most skeletal of folk standard templates through unconventional instrumentation. Thus opener ‘Cairns’ could be almost non-existent, were it not for the insistent swells of fragile vocal harmony rising through its ivory backbone. Similarly, the instrumental ‘Cat Bells’ is a graceful flourish, its glassy and fragile architecture troubled by the clanging of the worship procession’s incense burner as they pace through its cloisters.

The real star here though is Elizabeth’s voice. A soft and comforting thing through the majority of Wrought Iron, there are moments when her aloof contemplation suddenly becomes almost jarringly direct – her crisp descending consonants amongst the pastoral lilt of ‘Feet of Courage’ or the disarmingly intimate lover’s whisper of ‘Ruins’. She is seemingly capable of emulating as many instruments as there are songs here: a violin over the smooth sweeping layers of ‘Canopy’; jaunty woodwind during the staccato drops of album highlight ‘Lay Low’. Set over a distant and jazzy Nick Drake guitar figure, it babbles and churns like a mountain spring, building to a four-to-the-floor stomp before dissociating once again beneath a distant fanfare. It’s one of the most charmingly understated things I’ve heard for a long time.

Sparsely arranged as it is, Wrought Iron’s is a densely wooded landscape; even its open spaces are heavily pregnant with mounting tension and the tease of release. The most striking example comes early on – second song ‘Here Comes That Hurricane’ starts life as a gentle breeze, a cyclic guitar motif lilting softly as the wind gradually picks up in gusts of piano before settling. Then, abruptly, the storm’s full force bursts into life for a feral few seconds, lifting spiraling trails of russet leaves off the forest floor into a dizzying whorl, and subsides once again. The entire album is characterised by that same sense of ebb and flow, an organic energy - but one distinctly separate from the kind of hippy-ish earthchild charm beloved of so many neo-folkies. There’s a slightly sardonic tone to her performance at times, a knowing gesture that sets Elizabeth apart in her own category.

The Leaf Label have been on form recently. New albums from Wildbirds & Peacedrums, Vladislav Delay and A Hawk And A Hacksaw have all featured prominently in my listening over the last few months, and it looks as though Wrought Iron will be no exception. Nancy Elizabeth has managed to pull off a similar trick to many of Leaf’s artists – that of placing a distinctive and personal slant on an already well considered sound palette – with typically intriguing results.