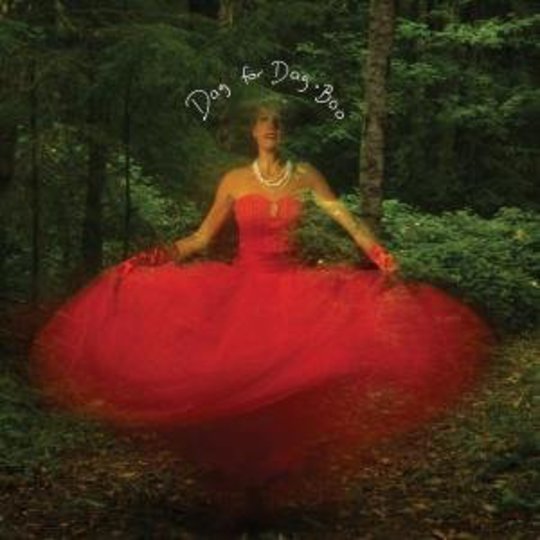 Dag För Dag are a brother and sister duo. Apparently someone once told them that they are 'closer than I could ever imagine being to my sister'. Which is a little creepy. But then this is a creepy album. The title, Boo, perhaps hints at flirtation with the supernatural. The artwork captures vocalist Sarah Parthemore Snavely in a blood-red horror-flick heroine dress, fading like a phantom from the spooky forest setting.

It comes as no surprise then, when the drums and bass clatter together like old furniture settling on ‘I Am The Assassin’. Sarah’s vocals ooze in perfect harmony with the strangled guitar lines, all of which has been processed to eerie disembodiment. It’s completely dark, but with a twisted groove, reminiscent of Radiohead’s more psychedelic moments – somewhere in between ‘Bodysnatchers’ and ‘There There’.
It’s a similar, bass-driven approach that makes ‘Seven Stories’ so entrancing. It plods disinterestedly with a Carlos D-like cool, until the guitar collides with chromatic fury. But as well as nods to Interpol, Dag För Dag reference many of their other gloomy contemporaries. The power of Boo however, is that it is too vivid, too engrossing to be dismissed as another Joy Division copycat record.

‘Traffic Jam’ could be mistaken for The XX – musically, it’s so subtle that at times it might as well be a cappella. Yet it’s Sarah’s sneer, like a Swedish Kim Gordon, that gives the song its dynamism. (On bonus track ‘Ring Me, Elise’ incidentally, she might easily be asking her friend, Goo, ‘what’s new?’) The influence of tourmates The Kills is similarly apparent on ‘The Leather Of Your Boots’ as the drums stomp beneath irreverently seductive vocals. Again though, Dag För Dag show greater intricacy, as the percussion suddenly complicates and a desert-rock guitar solo tears the track apart.

So Boo is anything but predictable. Even after ‘I Am The Assassin’ sets the album’s tone as frantically sinister, along comes ‘Hands And Knees’. As high-end bass octaves glide dreamily, the vocal melody repeats, setting you in a trance until drums and guitar declare war on each other. The jerking rhythm however, defines the battlefield as the dancefloor, making ‘Hands And Knees’ an early contender for track of the year.

Dag För Dag are not always this wild. Jacob Donald Snavely takes lead vocals on ‘Boxed Up In Pine’, which is just as hypnotic, but doesn’t reinvent itself in the same way as earlier tracks. Instead, it remains restrained and is given the space to develop, as a screeching violin haunts throughout. ‘Silence As The Verb’ and ‘Light On Your Feet’ are just as unsettling, but equally as compelling, as Jacob repeats their respective refrains with cryptic obsession.

In fact, ‘cryptic’ is probably the best word to describe Boo. The album inhabits a clearly defined space which is, by definition, shrouded in darkness, mystery and intrigue. Dag För Dag’s songs – musically and lyrically – paint powerful images of distorted landscapes and warped personalities. Their melodies are twisted out of shape, but utterly distinctive. Their harmonies are tangled together like branches in a forest, but are articulated with stark clarity. It is for this reason, that anyone who spends a little bit of time with Boo will find themselves going back for more, time after time after time, trying to work out what it’s all about.