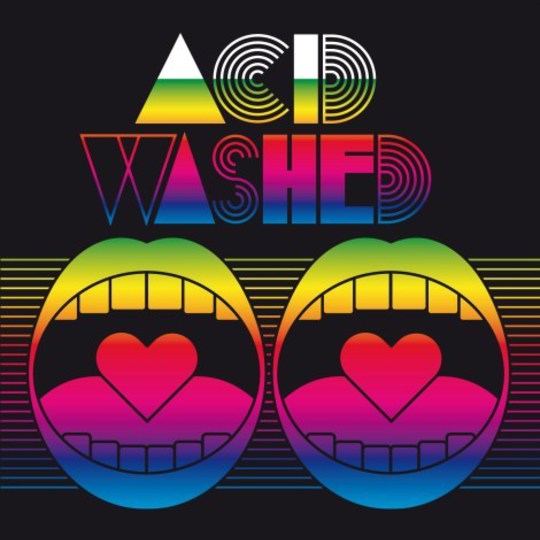 Being new members of the Record Makers stable, also home to Sebastian Tellier and Kavinsky, it was hardly surprising that Acid Washed's first release, General Motors, Detriot, America/Snake, was a 12-inch single featuring two titular originals and a raft of remixes from the likes of Gavin Russom of DFA.

Said 12-inch is pretty representative of Acid Washed's musical spectrum, with the two originals forming the opening salvo on the Parisian duo's eponymous debut. On first listen 'General Motors, Detroit, America' may sound like a pretty lazy appropriation of Moroder-indebted Euro-house, nothing much more than six minutes of ostinato synth bass with little textural variations. Repeated listens reap dividends however. The rhythmic economy of a simple bass drum with passages of bongo/conga slapping leaves plenty of space for the throbbing ostinato basslines to dictate the songs pulse. Meanwhile matching high-end synth arpeggios glisten and dissolve with a sense of retro-futurist wonderment amidst choral string washes. With no vocals, the main pleasure of 'General Motors' is a purely aural one, with the array of analog synth voices the focus for the listener, as opposed to a human voice; although arguably retrogressive they are also undeniably sumptuous and have a genuinely tangible organic feel, perhaps the focus for the those who detect a DFA influence in the Parisian duo's sound.

This organic feel is also present in other instrumental tracks, like 'Change' and especially the higher tempo of 'Concorde In the Sunrise', that dominate the album's first half. While the crisp programmed beats retain a mechanistic consistency throughout, the ever present synth arpeggios result in some startlingly natural sounding melodic progressions. It's like the melodies are on a revolving wheel, but are restlessly grasping for additional notes here and there in a constant attempt to wriggle their way out into new patterns and shapes. While these repetitive motifs make up the meat of these tracks, a variety of other synth sounds provide some much need accents to what would otherwise be overly familiar/repetitive sounds. The aforementioned 'Concorde In the Sunshine' maintains its urgency not through unrelenting tempo, but rather through a subtle chiming refrain, a blurry swirl of electronics and lastly a reed/violin-like synth lead which brings an unexpected tinge of melancholy to the song's conclusion. In contrast the beat on 'Change' ceases entirely at the song's mid-point, giving way to some decaying analogue noise that sort of has the same effect as dropping the intro to OMD's 'Maid of Orleans' in the middle of Donna Summer's 'I Feel Love'.

The other side of Acid Washed's coin is defined by their vocal collaborators and like the instrumental side finds a representative precedent in the form of 'General Motors...' flipside 'Snakes'. The song sounds both club and chart ready with a boisterous thump, click 'n' pop of a beat which borders on crunk and synths that recalls Usher's 'Yeah!' That mightn't sound too appealing, but thankfully the vocal contribution from the appropriately named Barbara Panther is in turns both alluring ("Around my hips my favourite toy, gonna teach you how to play boy") and intimidating ("I am not the kind of girl with whom you toss around, it's time to take you to a place where the lost are found"). 'Apply' has most of Acid Washed's sonic traits distilled within its four minutes over the top of a 'Fix Up, Look Sharp'-beat with a gently twinkling chorus and playful vocals from Lippie. She also contributes vocals on 'Snow Melts': the album's most ostensibly atmospheric track, it instead comes off as rather dour and lifeless and is done no favours by sequencing which places it after a cheeky cover of 'The Rain' by Oran 'Juice' Jones.

While the vocal contributions undoubtedly make for a more varied and less patience testing album than an entirely instrumental affair might have been, there's a nagging feeling of Acid Washed themselves fading too far into the background on these tracks. The result is an album that lacks a little cohesion overall; as the instrumental tracks requiring greater attention to detail to fully appreciate, those instrumental tracks which around surrounded by vocal tracks get a little lost in the mix. This is a minor gripe, however, when the individual tracks (be they pop, electro-funk, euro-house or whatever) are for the most part such a treat.