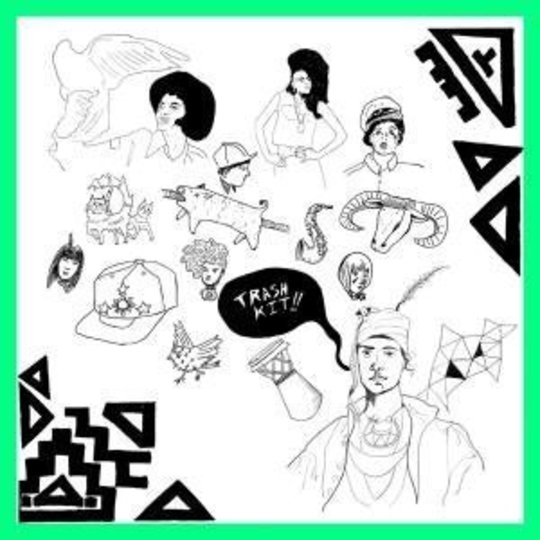 While never being one to endorse a seachange towards lad-infested pub rock, there seems to be an avalanche of all-girl DIY (post) punk orientated bands swarming round the capital at this moment in time. Again, without playing the chicken against the egg, and therefore not actually being overly concerned as to which one came first, the likes of Pens, La La Vasquez, Wetdog and Trash Kit have all burst onto the scene in different ways, clearly indebted to the likes of The Raincoats, Talulah Gosh, the Au Pairs and even Siouxsie Sioux in their own sweet way. Now before someone comes back with a terse "But they don't sound like any of them" in retort, let's make it clear the comparisons are more one of ethos and attitude than musical similarities (although there are many between Trash Kit and the Au Pairs, for sure).

What's most disconcerting however is that the American bands of a similar ilk - I'm talking about people like Vivian Girls, Brilliant Colors, Girls At Dawn and Dum Dum Girls - seem to have grasped the concept of combining ramshackle DIY sensibility with actually creating songs to go with their raucous energy so much better. That's not to do their English counterparts a disservice, but at times there is a nagging feeling that occasionally they're trying to hard for that extra level of quirkiness where a more tuneful approach would suffice.

Trash Kit is the debut long player from the London three-piece of the same name, which features two girls called Rachel, and Ros Murray, perhaps better known for her work with Electrelane. Cramming 17 pieces of music in less than half an hour, it actually gives the likes of old school thrashers Napalm Death and Carcass a run for their money in the 'Here Today, Gone Today' stakes, but as far as being a pleasant listening experience goes, there are moments where less could be more (several songs seem to revolve around repeated screams of "Oh Oh Oh Oh"). Yet at the same time, if more songs followed the sinister groove of 'Filipino Song', discordant 'Tattoo' or percussion heavy 'Fame' then we'd be on to a definite winner here.

Elsewhere, 'Gorey' confuses single chord jazz funk with the Gang Of Four's 'Ether' to surprisingly satisfactory effect, while '50 Ft Woman' and 'Pig Cat' conjure up both surf guitar and noise to masterful effect. Yet, as a complete whole, Trash Kit just falls short of many of its peers both past and present. Four of the 'songs' don't even stretch to a minute and a further four barely break the 60-second barrier. We're not asking for prog rock, but they could do with adding a little bit more sustenance.

Sure, there's no doubting the Trash Kit live experience would be a far more entertaining one than on record, as spectators of their set at Matt Groening's ATP have already suggested. However, for all its visceral spurts and occasional bursts into experimental freeform territories, Trash Kit isn't quite ready to sit shoulder to shoulder with the superior likes of Playing With A Different Sex or Odyshape.

Here's to Taking it Easy