Working for a Nuclear Free City 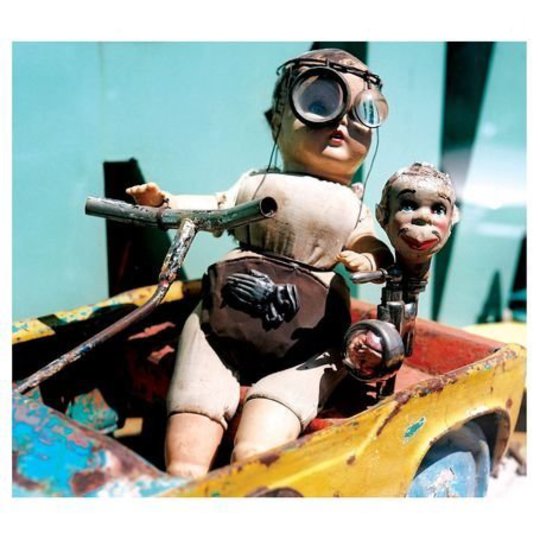 If the opening track of an album is meant to give an indication of what is to follow, then ‘Do A Stunt’ does just that for Working For A Nuclear Free City on Jojo Burger Tempest. It is an instrumental introduction which, in less than three minutes, covers electro and funk via sections of mariachi guitar, grooving bass and quirky sci-fi synths. It feels like being taken on a light-speed tour of the band’s studio, absorbing their entire record collection on the way.

It could be seen as an accomplishment that WFANFC were able to fit so much into such a short space of time. But it does set a context for some highly indulgent experimentation, which the remaining 90 minutes of the record does its best to live up to.

‘Pachinko’, for example, is one of many instrumental tracks on Jojo Burger Tempest. It is swimming in bleeps and squelches – an audible alphabet of psychedelic sound effects. But it feels like this is all to compensate for a fairly plain bass riff that the song is structured around. There is a tight crescendo that offers a musical kick, but even this sounds like wasted energy, as it takes half a dozen awkward loops to have the same impact that a lone distorted guitar could have made.

Similarly, the numerous guitars and synths on the psych-folk ballad ‘Silent Times’ tend to be more atmospheric than melodic, meaning there is very little that will stick in your head. Indeed, it’s often very difficult for hooks to make themselves heard beneath all the artificial noise. ‘Black Rivers’ offers an ominously catchy bass hook, which makes it feel as though there might be a song in there somewhere, if only the band would let it out. The folky ‘Little Lenin’ suffers from the same problem of having had a sequencer rammed up its arse.

WFANFC are better when they sound more natural. ‘Faster Daniel Faster’ is, instrumentally, a more straightforward bit of avant-garde indie, making the band sound more human until their synth gimmicks intrude again in the closing bars. Only on ‘Low’ do they really strike the right balance of energetic guitar and soaring synthesised atmospherics, making a grinding indie-rock track into something quite special.

By and large though, WFANFC seem to be taking on too much at once. The stompy indie-rock of ‘The King And June’ should really be on another album by another band, as it simply doesn’t sit right in the flow of the psychedelia. In the same way, ‘Burning’ is too stripped back to fit into the album this late on. But at least as a slightly maudlin folk song it shows that the band are capable letting their guard down and abandoning all their tricks.

They achieve more of what they set out to on ‘The Jojo Burger Tempest’, which, at thirty-three-and-a-half minutes long, comes on a separate disc. Such length gives WFANFC the space to not only work their way through their diverse range of ideas, but also to get those ideas to work together. Now that they aren’t forced break up their music into three-minute snippets, they are able weave indie and rock into electro and funk with a great deal more clarity and cleverness.

Unfortunately, the hour-long main section of Jojo Burger Tempest is too hollow to be of much merit. The great variety of timbres on the album creates a psychedelic vibe, but the songs themselves are simply lacking in focus. Too much attention is paid to how they sound at the expense of what they say. There is great irony therefore, in the fact that it probably took WFANFC many months of meticulous perfectionism to create and arrange the sounds produced on this record, because fundamentally, they are the shiny packaging on an empty box.