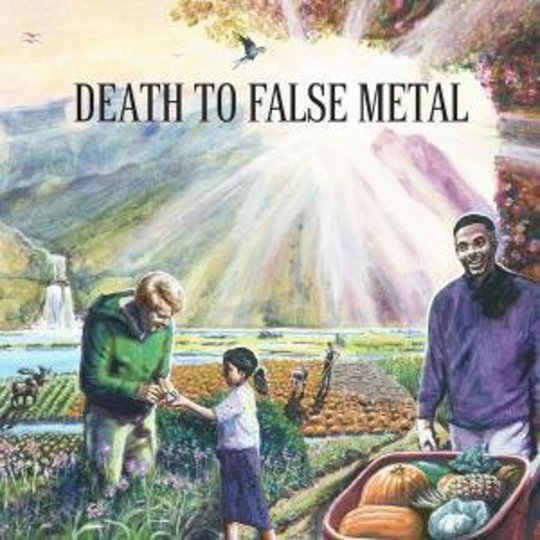 Ever since Maladroit, Weezer albums have been one betrayal after another: promising so much and delivering so little. Make Believe showed the first signs of rot with the release of the MTV friendly Playboy bunny toting irony of ‘Beverly Hills’; by the asleep at the wheel romps of ‘Dreaming’ and ‘Everybody Get Dangerous’ on Weezer (The Red Album) it became evident that this wasn’t the same band who had mixed intricate funk with meaty grunge chords for the simmering angst of ‘Say It Ain’t So’.

By Raditude the love affair with this band was definitely on the rocks. Rivers Cuomo danced around like a dad at a wedding reception trying to prove that he’s still down with the kids on the cringe-worthy ‘Can’t Stop Partying’ with Lil Wayne. Each record has seen Weezer once again churning out the same formula that’s more tried and tested than Coca Cola: power-chord verses, big chorus, Beach Boy harmonies and the obligatory howling Kiss solos. Only Hurley has offered a gasp of fresh air in the overwhelming stench of mediocrity of the band’s recent career.

So, it came as a welcome relief that, with Rivers turning 40, he’s decided to delve into vaults of Weezer’s 17 year history to treat fans to some rarities. Twinned with the release of a deluxe edition of Pinkerton, Death To False Metal is the second part of the retrospective, which will be followed by the Blinkerton tour, the third instalment of Rivers’ solo project Alone - set to feature tracks from lost album Songs From the Black Hole - before finishing with the publication of Rivers' memoirs from the Pinkerton era.

Other than Rivers previously unofficially releasing tracks via his Captured Riffs website, DTFM is the first time Weezer have officially released any rarities and has been described by Rivers himself as: 'great songs, great recordings, but for some reason they didn’t make the final cut for a record'. So, once again like with release of every Weezer record you start to feel that rush of when you first heard the unbridled frustration of ‘Undone (The Sweater Song)’ and the drunken plucked strings and gargled intro of ‘El Scorcho’. But, no. Unfortunately Rivers is dicking around on us, again.

Opening track ‘Turning Up The Radio’ whirs into action only to stall 30 seconds later with the usual lyrical fare dissing jocks in favour of the geeks with a MOR power chorus. Written as part of a collaborative project with fans on YouTube, it distils Weezer down to their most base and boring values.

The rest of the record continues in this lineage of dumbed down music to even more dumb lyrics. ‘Blowin’ My Stack’ bides its time with a banal narrative until Rivers can wail, “Blowing my staaackkk” over and over and over again. ‘Trampoline’ is like ‘Blowins’ dim witted inbred half sister as Rivers whines in a nasally sneer the word “traaaaampoline” to a ‘What’s The Frequency Kenneth?’ four chord stomp, whilst on ‘I’m A Robot’ Rivers tries to empathise with the plight of the working man to a jaunty beat. Sure, Weezer have always been know for their obscure humour, but when you get to singing about picking up dog shit (‘Autopilot’) it becomes more like a knock-knock joke compared to the wit and timing on tracks, ‘Pink Triangle’ or ‘El Scorchio’.

However, there are flecks of gold in the dirt of DTFM. ‘Everyone’, written in the missing years after Pinkerton, although continuing the lyrical mindlessness of Rivers screaming for “everyone, suck a thumb”, actually breaks a sweat and the grinding formula in a distortion heavy fug. ‘Losing My Mind’s pleas for sanity, set to gently plucked chords and melancholy strings, recall the fragility of ‘Butterfly’.

The only cover version on the record, Toni Braxton’s ‘Unbreak My Heart’, is also one of Weezer’s more successful, especially compared to their recent bastardisation of ‘Poker Face'/‘Kids’. Covered on the advice of Rick Rubin, Rivers’ forlorn vocals wrap seamlessly around the fractured words as he soars into a falsetto as the guitars reach a crescendo.

There’s no doubt Rivers is capable of astonishing creative output, supposedly at one time writing 384 songs in the space of three years. But, just because you can write a song every other day it doesn’t mean that each one is worthy of being unleashed on the public, to paraphrase Bill Hicks’: “kerthunk, there’s another miracle”. And, it’s not like there aren’t any good songs lurking in those vaults as ‘Tragic Girl’ and ‘Getting Up And Leaving’ from the deluxe edition of Pinkerton have proven.

With the band consecutively releasing a record every year since 2008, maybe it’s time for them to go away from the public eye for a while, recharge, spend some time to rifle through the back-catalogue again and maybe find something that’s worth listening to, rather than them continuing to rush release dull album after dull album that defecates on the memory of a band that was once sublime, only to have been reduced to poor imitators of their former glory. Until that happens, we’re officially on a break.