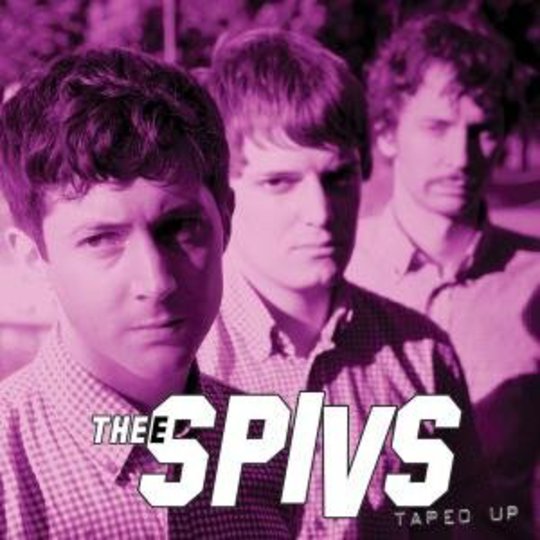 Thee Spivs don’t mess about. They play fast, their power chords are punchy, and their songs rarely last longer than a couple of minutes. Their debut album, Taped Up, spans 14 tracks, but its total length doesn’t even pass the half hour mark.

There’s a lot to be said for a band that can be so direct and straightforward, because it’s not always easy to be concise. It suggests that Thee Spivs are the type of people who could sum up in a sentence what most people would waste a paragraph on. You might say that they’re the perfect band for a society that communicates in 140-character fragments. It’s up to you to decide whether that’s a good thing or a bad thing.

The fact is though, there’s not really anything new in Thee Spivs’ succinctness. Just listen to ‘Leave Me Alone’ and try and pretend that it doesn’t remind you of The Buzzcocks or, to a lesser extent, very early Green Day. That’s not to say it isn’t a decent song though. The guitars seem to sneer with a simplicity that appeals unashamedly on a most basic level. It isn’t bloated with unwieldy anger, it’s just a bit pissed off. It sums up a feeling that most people won’t get through a day without experiencing.

Opening track ‘Radio’ is the blueprint for Taped Up. The verses only use one chord, as though focussing on that one noise is all that guitarist/vocalist Ben Edge can do to restrain himself from lashing out completely. It is purely, wholly, punk rock, replicating the genre precisely and sincerely. If it had been written 35 years ago, it would have been revolutionary.

For 2010 though, Thee Spivs seem to have very little new to offer. They nod to the present day on ‘Uncle’s Got An ASBO’, one of the most interesting tracks on Taped Up. It’s hardly insightful, as you might guess from the title, but there’s something fascinating about hearing a discussion that’s usually shrouded in political sophistry put so plainly. And it’s exhilarating too, to imagine that this is probably what the Sex Pistols might have sounded like if punk had come a few decades later.

That, however, is all that makes the song stand out. After ten or so minutes of rapid-fire power chords and snotty vocals, you get the idea and wonder why you aren’t listening to one of the bands who covered this ground the first time around. The rare flirtations with other genres are hardly sensational. Sluggish blues-rock riffs dominate ‘Invisible Man’, and bring a welcome moment of relief from the punk onslaught, but don’t pose much of a threat to The Black Keys or The White Stripes.

One track that is worth a mention, however, is the instrumental jam of ‘Head Hunt’. Here, the structure is decidedly loose and the power chords have been dropped in favour of shrieking, dissonant melodies. It’s nothing that Sonic Youth haven’t done, drenched in feedback and ominous psychedelia, but it at least suggests that Thee Spivs might be tempted to try something a little different in future. For now though, their contribution to contemporary music, while technically accomplished, is largely superfluous.

Small Craft on a Milk Sea