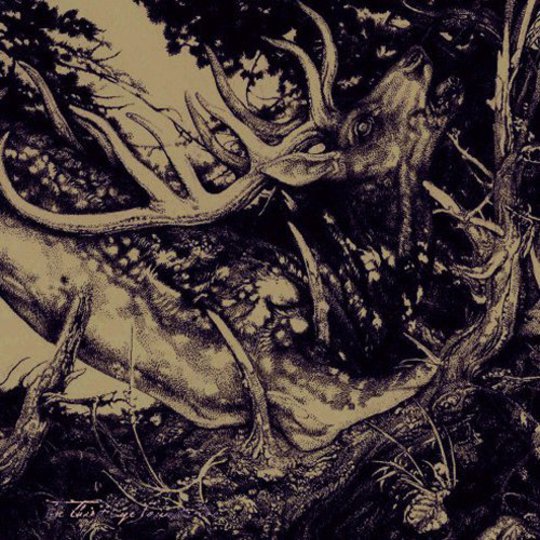 It may be a surprise to some to see Bristolian Matt Elliott operating under his Third Eye Foundation moniker once again. It has, after all, been ten long years since he last threw on this guise. That’s ten years in which his former label Domino has transformed from a licensee of abrasive American indie-rock into a chart bothering mega-stable of talent; ten years in which Elliott has ducked away from the pulverizing drill'n'bass exhortations of yore and instead poured all the light in his music into his folksy singer-songwriter material; and ten years in which his unnerving ability to match spleen and sorrow and turn it into a palatable (and disjointedly danceable) whole have been subtly exhumed and worked into genres such as dubstep and the spurious witch house movement.

Perhaps Elliott was mindful of those interlopers who were brushing shoulders with his earlier output; if so, The Dark plays out as a redemptive piece, a chance for him to find his way back into a space that’s becoming ever more crowded. As such, it’s certainly appropriately titled, and this release has been executed with some style and ambition. Online trailers, luxuriant packaging, and a track listing of five songs that are essentially all part of one piece is certainly a way to make a notable comeback. Elliott has joined forces with his French record label Ici, d'Ailleurs to put out The Dark, and the overriding classical hue of the music has been partly eased into shape by his collaboration with multi instrumentalists Louis Warynski and Chris Cole.

But while The Dark has been fashioned from a set of pieces that are inexorably intertwined, there are contrasting moods threaded throughout it, which is probably what prompted Elliott to scythe it into five parts with different titles. The opening ‘Anhedonia’ sets a resolutely downbeat tone over its 11-minute runtime, which sputters along with malfunctioning half-paced drum samples that sound like a classic Doc Scott Metalheadz jungle track unfolding in slow motion. Elliott’s fascination with classical music becomes ever more prominent as the track enters its final third, with the beats taking a back seat to gloomy night terror cello parts mixed with the shrill wordless whine of an opera singer.

There are some obvious ties between this material and the Ghost Box/Mordant Music hauntology scene, although the Third Eye Foundation has less whimsical touches, instead choosing to extract strands of influence from the horror oriented soundtrack work of Howard Shore and Bernard Hermann, or the chilly scores Krzysztof Komeda put together for Roman Polanski’s earliest works. From ‘Anhedonia’ Elliott seamlessly segues into ‘Standard Deviation’, a similarly lengthy piece that continues the theme of putting formless vocal moans up against fractured drum and bass rhythms, but there’s a thickening in atmosphere toward the close of the track, with Elliott ratcheting up the cacophony to breaking point and then releasing the tension altogether in the following ‘Pareidolla’.

It’s during this centre point in the album that Elliott flits between moods, allowing the tranquil opening to split apart and secede to beats that awkwardly pile up on top of one another. It all spirals around an ever-repeating string motif that allows the Third Eye Foundation sound to mesh with a more overt classical arrangement toward the end of the song, ultimately delivering ‘Closure’, which is a rare dip into more straightforward fare. On this track Elliott keeps his studio tinkering to a minimum, instead allowing its central riff to quietly ripple up to the surface while he tools away somewhere in the background, preferring to let the gentle beauty of his loops shine brightest.

The album closer, ‘If You Treat Us All Like Terrorists We Will Become Terrorists’, is a delve back into the brittle terrain that no Third Eye Foundation album would be complete without, as Elliott suddenly ratchets up the beats once more and weaves in a distinct Eastern influence, the type of which bands like Psychic Ills, Gang Gang Dance, and Prince Rama have tampered with in recent history. It’s a fitting end to an undoubtedly impressive comeback, although it’s startling to see how little has changed in the intervening years since Elliott released the Little Lost Soul album. Perhaps this will be a gateway to a further reinvention of the Third Eye Foundation, a chance to feel out old sounds and become reacquainted with an idiom Elliott had avoided for the best part of a decade, and will now move beyond in future days. Either way, this is an unexpected and welcome return.

Teeth Of The Sea