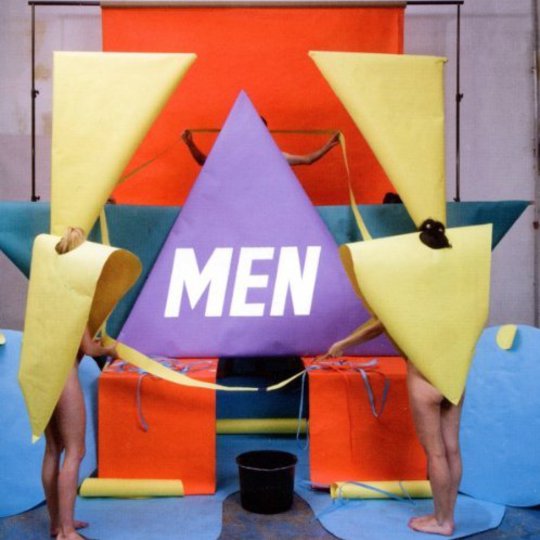 It’s not as though there hasn’t been commentary on the recession, or war, or the failings of governments at home and abroad, but there hasn’t been much that’s been entertaining. There will never be a shortage of overly-earnest talking heads, but earnestness isn’t going to attract anyone who doesn’t already agree. At this very weird social, political and economic juncture in American history, MEN have made a record that comments on homophobia and socio-economic stratification that is, amazingly, a lot of fun to listen to.

What’s curious about it, is that Talk About Body is so ridiculously accessible musically, that audiences dancing along to MEN's absurdly addictive pop songs are likely to be blindsided if they ever listen carefully to the lyrics. Their latest single, 'Off Our Backs', already seems poised to be misappropriated for some family-friendly beach holiday package, regardless of any sexual connotations.

For the most part, the sexual connotations are really quite blatant: not necessarily heavy-handed but sometimes startlingly frank. Lead single 'Credit Card Babie$' - the catchiest song ever written about the options for starting a non-hetero-normative family - suggests, “Why don’t you adopt?/Borrow someone’s cock”. Forthcoming single 'Who Am I to Feel So Free?' is a feminist anthem full of gender-bending imagery and vitriol towards a trashed economy.

But it’s not all so politically-minded. The Orange Juice-referencing 'Rip Off', an exercise is post-modern songwriting, aptly sums up MEN’s style of “infuse[d] post-punk guitars/With disco and funk rhythms”, while creating one big name-checking inside joke for indie kids. While a little more chilled-out than the rest of Talk About Body, 'Rip Off' presents the band's style in an easily digestible, deconstructed way: the guitars, the programmed rhythms, the bright, shiny synths, the chanted choruses.

The deviations from the formula, few and far between though they are, bog down the momentum of the record. 'If You Want Something' could have been reserved for B-side material (albeit an above average B-side). It’s already a good starting point for a more-involved remix. And though 'My Family' is just as energetic as the best of the tracks, it’s also full of befuddling new-age references to goddesses and preaches the concept of having enough over excess; lyrics mercifully abstract that blend in with the rest of the dance track.

Then there is the matter of MEN calling themselves a 'performance collective', a title that will surely inspire a few eye rolls and heavy sighs. The assumed title does make a little more sense in the context of their live performances, which are enhanced by colorful backdrops painted by Emily Roysdon, with the band suited in matching, painted jumpsuits. And MEN frontwoman JD Samon’s Le Tigre bandmate Johanna Fateman did quite a bit of work on songwriting and production, despite not performing on the record or live. So if integrating Fateman and Roysdon into the project requires a potentially pretentious title, so be it. If you need further convincing, catch the band live and see if the visual compliment to the electro-disco doesn’t persuade you.