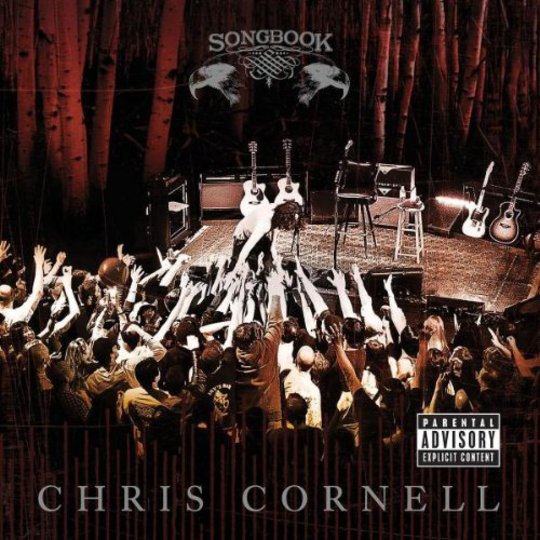 Finally, Chris Cornell is giving his fans what they want. After a number of attempts at pushing them away with misguided Timbaland collaboration Scream and tours with Linkin Park, he now eagerly ushers them back into the fold, first with a Soundgarden reunion and now his debut acoustic album, Songbook. While the fruits of Soundgarden 2.0’s labours are yet to be seen, Songbook comes off the back of Cornell’s highly rated solo acoustic shows in the USA. However, as is often the question with live compilations (including Soundgarden’s own Live on I-5), can a collection of live performances really gel as an album?

First impressions are that the tracklisting is a bit predictable. Of course, any compilation, live or otherwise, is likely to be populated with hits but with Cornell, many of the choices here are not what people were talking about after his live shows. Anyone who’s spent a few minutes on YouTube will be asking why ‘Seasons’, ‘Like Suicide’, ‘Mind Riot’, ‘When I’m Down’, ‘Sunshower’ and countless others are so obviously missing; all were highlights of Cornell’s acoustic shows yet strangely absent from this collection.

Still, what’s here is good, occasionally bordering on brilliant. There’s no denying that giving up the smoke and the booze during the Audioslave era has helped Cornell’s vocal cords immeasurably, as his high notes soar and his lows rumble with a timbre only vocal maturity can bring. This is best observed in a rendition of the aforementioned super-group’s ‘Wide Awake’, which is transformed from a clunky rawk anthem into a dark murder ballad, with Cornell’s previously painful screams now a comfortable wail. Other songs benefiting from the acoustic treatment include Scream’s Timbaland-free ‘Ground Zero’ and, perhaps the compilation’s finest moment, Soundgarden classic ‘Fell on Black Days’, jaw-dropping in its vocal dexterity and stripped-down intensity.

Elsewhere, we’ve got a disappointingly limited selection of solo material (‘Can’t Change Me’, ‘Scar on the Sky’), a couple of Temple of the Dog nods (‘Call Me a Dog’, ‘All Night Thing’) and some fairly impressive rarities (opener ‘As Hope and Promise Fade’, ‘Cleaning My Gun’). All are capable enough renditions but lend themselves so effortlessly to the acoustic setting that they fail to be ground-breaking. Top that off with a distinct lack of atmosphere, banter and flow between tracks and, no matter how well intended, these particular song choices feel like a wasted opportunity.

Ultimately, Songbook is not let down by performances or production but by its tracklisting. This release had the potential to be utterly essential, should it have included some of the more unorthodox arrangements Cornell had been popularising on his acoustic tours, but instead settles for the overwhelmingly obvious. There are some tracks, like obligatory Soundgarden masterpiece ‘Black Hole Sun’, which form necessities but is ‘Doesn’t Remind Me’ really worthy of a spot? Not even a touching version of Led Zeppelin’s ‘Thank You’ or an overly saccharine homage to hero John Lennon in ‘Imagine’ can quite obscure the fact that this could have, and should have, been better.

As a beginner’s introduction to Cornell’s work, Songbook is exemplary, but for the fans, who this is apparently aimed at, it fails to completely satisfy. Closing studio track ‘The Keeper’ does bring with it a considerable amount of hope for the future but, for now, Songbook is a disappointing substitute for even the grainiest of YouTube footage.