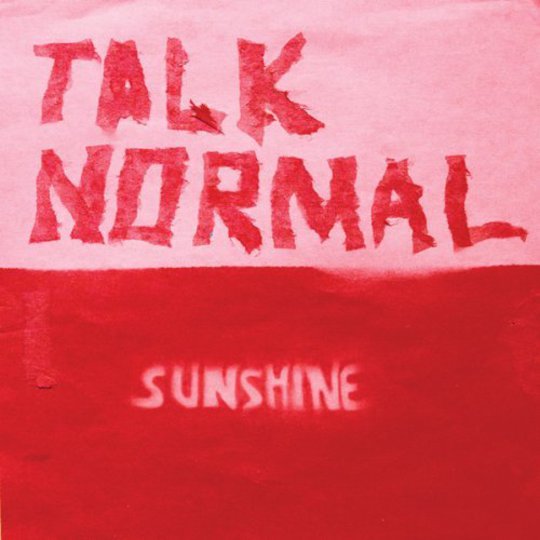 It has been suggested with the usual futile navel gazing that guitar music is going to make a big comeback in 2013. And as the all-female band Haim won BBC’s Sound of 2013, it is also being suggested that guitar music by women will be the thing for 2013.

Whoever is making these empty predictions probably doesn’t have Talk Normal in mind, despite the band being composed of two women, one of whom plays guitar. Paying homage at the altar of Sonic Youth may be the wrong kind of guitar music.

If Talk Normal are not a guitar band, then they are a noise band, and an intimidatingly good one at that. Their second full length album, Sunshine - which had its US release back in October - wonderfully demonstrates the finesse necessary to play noise rock.

Talk Normal probably couldn’t be considered a guitar band despite the presence of guitar because they are willing to highlight other instruments. Having a particularly talented drummer, it makes sense that they feature the drums as prominently or more prominently than the guitar on some tracks. They even allow organs to sneak in on 'Cover', and the odd, very clear thud of a bass to break up the relentless washing, sleeting of the guitar.

There is something hard in Talk Normal’s delivery - in the scattered pounding of the drums, in the disaffected vocals (occasionally interrupted by a startling yelp). It taunts with a cruelty born of world weariness and brings out the sinister nature of their sometimes violent lyrics.

Their atonal vocals, sometimes downright ghoulish when frayed and frazzled by reverb, match the endlessly droning guitars. And there is a lot of reverb on Sunshine, but nothing is uniformly drowned out. When Talk Normal fuzz things up, they do so with intent, and when the vocals are left clean, the impact is tremendous.

For all of the drone throughout the album, there are unexpected concessions to pop music hiding in the backing vocals on 'Shot This Time' and the relentless beat of 'XO'. As a whole, the songs on Sunshine adhere more to conventional pop music structures than its predecessor. Pop music, but apparently not guitar music.