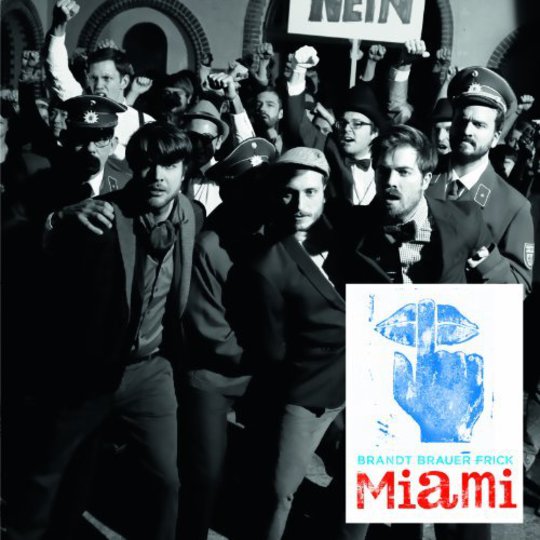 Brandt Brauer Frick are a bit of a anomaly. The be-suited German trio make dance music with (gasp!) 'real' instruments.

Renowned for a rousing live show which they have toured extensively as a ten piece ensemble, BBF describe their sound as 'emotional body music'. They often perform without aid of either laptop or sequencer, instead utilising such anachronisms as harps, grand pianos and a tuba.

On their impressive début, You Make Me Real, this live acoustic element was present, yet many of the tracks could still fit easily into a DJ mix, and didn't really deviate a great deal from the norms of house music. Yet 2011's Mr Machine, released as The Brandt Brauer Frick Ensemble, was written to be performed in concert halls, where natural acoustics could resonate. It owed as much to the operatic melodrama of Wagner as to anyone on the Dial record label.

The move away from the dance floor continues apace on Miami, a record its creators describe as 'something very different, more dark and more rough.' This is immediately evident on the beatless opener 'Miami Theme'; all brooding strings and frayed nerves, building to a threatened release which never arrives. It's a bold and bleak statement of intent, conjuring dystopian images of rolling thunderclouds and icy gales. This feeling is cemented by the following track, 'Ocean Drive.' Here the typically taut and militaristic rhythm section enters, sounding all the more powerful for its delayed entrance. Their musical virtuosity is immediately apparent, with rhythms being led by piano as much as by conventional percussion. It would be awesome to see this live. Each instrument is co-opted into the service of an overall percussive thrust. The results are quite aggressive and very distanced from any 'reach for the lasers' raveyness. 'Body music' it may be, yet the impulse to dance is achieved through sheer force of compulsion, not euphoria.

The contrast between this opening brace of songs reflects the album as a whole. It is diverse and bewildering, half opera house formality half dionysian freak out. The only thing binding the record's disparate pieces is a unifying note of dread. This makes me wonder if naming it Miami is an ironic gesture: it sounds more Frankenstein The Musical than Sunshine State, not that that's necessarily a bad thing. Just strange. The song 'Verwahrlosung' (roughly translated as 'neglect') is one of the many flirtations with industrial music on Miami, containing plucked violin strings and many nightmarish touches (descending off key piano lines / whispered, doom laden utterances). This is definitely not music to soundtrack serotonin enhanced oblivion.

One of the best things about the album is its impressive array of left-field collaborators. Nina Kravitz, Gudrun Gut (founder member of German nutters, Einsturzende Neubaten), Om' Mas Keith (Frank Ocean producer) and Jamie Lidell all feature. These cameos provide a much needed touch of the human, and Lidell's two contributions are, to my mind, the record's twin triumphs. His soulful croon on 'Broken Pieces' flits atop low end crunking bass, giving the brooding atmospherics both a playfulness and direction. This is one of the few moments where the stiff suited trio loosen up a bit. Whilst it may seem superficial to comment on appearance, the formality of their attire is reflected in their art. Stark, austere and regimented rhythms are the order of the day. Though as Lidell scats through the second half of 'Broken Pieces', it's possible to see a few rays of light enter the otherwise overwhelmingly dark atmosphere of the record.

The other experimental moments in the album fare less well, and make for a record that is continually shifting focus, one minute pounding tribal drums and the next hushed, ominous balladry. Classical, noise, techno, and industrial music all get an outing on Miami, and along with the numerous guest vocalists, make for a disjoined record, full of mini highs (such as the clattering impetus of 'Skiffle It Up') but with an equal amount of lows ('Plastic Like Your Mother', whose incessant time changes would test any listener's patience, is an obvious nadir). It also feels a bit over cerebral at times, as if the German auteurs are more concerned with providing dark narratives for the head than danceable rhythms for the body. And it's the latter at which they excel.

Brand Brauer Frick are unquestionably a force to be reckoned with, yet they seem unsure exactly what direction to take: whether to continue to interpret dance music using classical apparatus, or to move down a darker, more avant garde route. Either path could prove successful, yet this album depicts a band caught frustratingly between these two options.