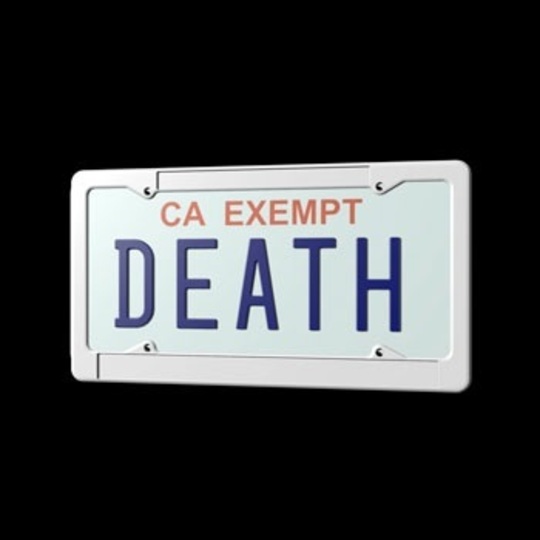 Sacramento noise vandals Death Grips pull the rug out with another impromptu free LP. Thirteen months ago they torpedoed their relationship with Epic when they leaked No Love Deep Web, a slightly underwhelming LP of digitally mangled hip-hop starring Zack Hill’s raging cock on the cover. Since then they seem to have short-changed everyone who’s shown an interest in them, missing live dates and causing fans to trash their equipment once they realised the Bottom Lounge stage would never be filled. But just as these tactics heralded a much hyped third album, so they’ve now cleared the path for Government Plates, a record nobody could see coming, and one that confirms their biggest strength: their ability to create provocative, original music.

As paranoid as The Money Store and with a little of Deep Web’s commercial bite, Government Plates could easily be marketed as the envelope-pushing comeback fans and managers had hoped for. There's an air of Rocky's return to the ring to give Clubber Lang a tanning: opener ‘You Might Think He Loves You for Your Money but I Know what He Really Loves You for it’s Your Brand New Leopard Skin Pillbox Hat’ hits hard despite its preposterous title, the smashed glass sounds ushering in bass like an earthquake and MC Ride’s crackpipe delivery. “Fear/You wear it well,” he screams as Flatlander chocks out cartwheeling synths and Zach Hill pounds the drums like a ghetto police entry team. ‘Feels Like a Wheel’ hits just as hard but is nimbler, all choppy vocal samples and beats that snag on the low-end, while ‘Bootleg (Don’t Need Your Help)’ teases us with pitch-shifted vocals and patches of silence where the bass sounds like a leaky tap. The message in these tracks is EAT THIS even MC Ride a little toned down, unable to shout over his bandmate's racket

Instead, Government Plates keeps its focus on Flatlander, who despite being rumoured to be working on a film score (rumoured to in fact be this album) is given more range with his shrieking electronics. While Death Grips’ beating heart is still loud, jerky sludge, their backgrounds are now as intricate as they are thrilling. ‘Two Heavens’ sugars its cry of “Fuck your idols/Suck my dick” with a chiming hip-hop beat and live piano, while ‘Anne Bonny’ hangs on to a single but succulent electro pad. The way it drops it into the beat is like aspirin into water, MC Ride’s caterwauling almost superfluous until the track dives into some bass-heavy verses. And if the album's clearest melody is hidden in the title track - all spraying drums and neon synths - then ‘Birds’ is its most outwardly experimental, stalling drums that jump into a solitary warbling guitar, and perfectly in keeping with Death Grips’ sense of mischief as the lead single.

Somehow all these disparate parts click together and make Government Plates the most captivating Death Grips album yet. Ride’s hushing up is less a nod to his critics and more a celebration of the band’s compositions, which here eclipse whatever furore the band have had heaped on them. At times they go into simple delighted highs: the raving analogue synths and 4/4 beat on ‘Big House’, ecstatic 8-bit volleys on ‘Whatever I Want (Fuck Who’s Watching)’, like you’ve just completed Qix. Death Grips have lot of fun on Government Plates and though they might be a hard band to invest your hopes in they’re one of the few brave enough to plough their own furrow, with Zack Hill and Flatlander still pulling unholy sounds from their equipment, and MC Ride still the maddest motherfucker under the bridge.