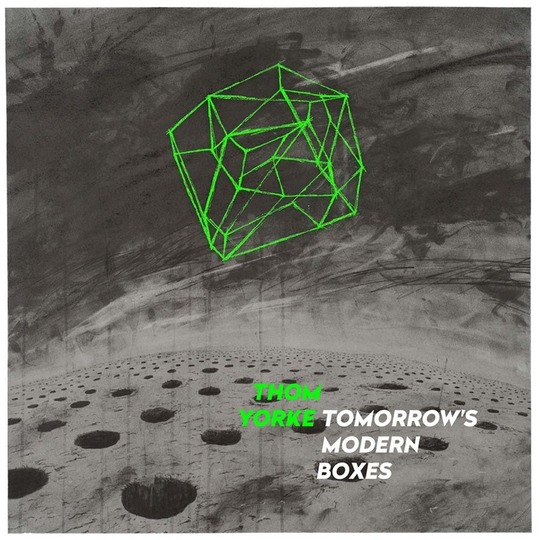 Perhaps the most nightmarish vision of the future that Thom Yorke and his popular backing band have shown us is one in which it’s impossible for anybody to release a record without the entire internet having a really boring discussion about the means by which it was released… I mean, when you boil it down, Tomorrow’s Modern Boxes was released as a paid for download and the rest is basically semantics.

So anyway, Tomorrow’s Modern Boxes is technically Yorke’s second solo album… though I recall that he was a bit funny about calling The Eraser a solo album (I'm pretty sure he tried to suggest the whole project was called 'The Eraser', including the artist name, though the cover art does not seem to bear that out).

Is that relevant to anything? Well, maybe a little bit. Though the sort of people who loudly bawl WELL IT’S EXACTLY WHAT YOU’D EXPECT ISN’T IT every time Yorke pokes his head out of the front door will say the same here, the fact is that this album doesn’t sound very much like The Eraser or even Atoms for Peace’s Amok. In fact, the Yorke-based records it most closely resembles are probably Kid A and Amnesiac, if perhaps more in spirit than literal sound. It could be a spectral electronic coda to those two records, sharing the same sense of shuffling murk and questing obscurity, its creator indulging in the same experiments in masking his own voice and song structures.

And it’s really great for it. Without the density of the day job, The Eraser and Amok often felt rather gauche, Yorke’s mosquito-like voice aggressively to the fore for the duration of the former, while the latter was inescapably reliant on Flea’s hysterically prominent slap bass. Yorke has always been better on the retreat, and here he retreats beautifully, sinking into a textured netherworld of undulating pulses and ghostly ambience, his voice soft and cherubic or machine distorted into a fine drizzle.

Not that he's without old-fashioned song craft - clearly the man has listened to a certain amount of Burial in the last several years, but despite Tomorrow’s Modern Boxes being an almost entirely electronic record, I’d say the atmosphere often resembles the grey magnificence of The Cure’s Faith as much as it does Untrue et al .

With its thick, wibbly bottom end, glitchy drums, dankly exotic synths and cavernous vocal echo, opener ‘A Brain in a Bottle’ would probably slot into Kid A/Amnesiac pretty much seamlessly. But the record’s heart probably lies in the foggily melodic ‘Guess Again!’ - hauntingly muffled piano chords and a quietly insistent stomp of a beat – and ‘Truth Ray’ – elegiac shards of synth and the record’s most nakedly affecting vocal – both of which have a deep, static, layered prettiness that you could lose days sinking into. And that goes double for the record’s lengthy final linked act of three songs: the haunted krauty primitivism of ‘There Is No Ice (In My Drink)’ splintering into the radiant angel noise of ‘Pink Section’ and then on into the glitched out loveliness of ‘Nose Grows Some’, one of the finer tracks the old grump has written in recent years.

There’s a distinct lack of choruses, and if you don’t like the rest of Yorke’s ouvre it would be kind of bizarre if this won you over. But really, if you have a tolerance for drums that go ‘fzzz’, Tomorrow’s Modern Boxes is a lovely, lovely record, easily Yorke’s best non-Radiohead effort. And it’s important to understand that despite blah blah BitTorrent, it’s a low key work of low key charm, a fading flicker of moonlight, a small treasure lying quietly in the dark, waiting for your hand to find it.