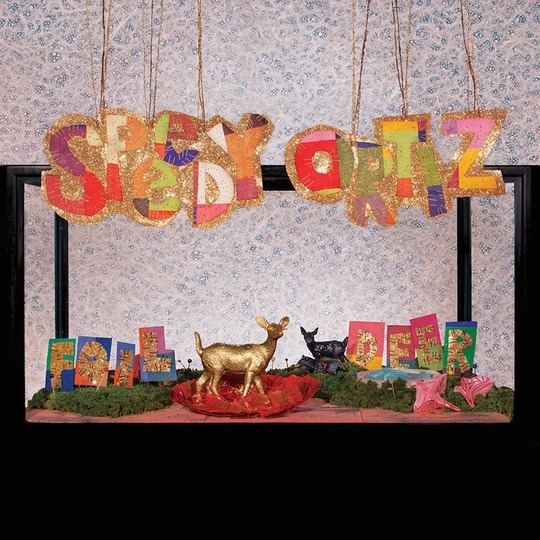 About two thirds of the way through the film Bring It On, the cheerleading squad led by Kirsten Dunst hits rock bottom. They’re reigning national champions but this year’s competition is just weeks away and the find themselves without a routine. All set to give up, Kirsten Dunst gives a rousing pep talk that gets them studying different kinds of movement from swing, interpretive dance and musicals to mime. Of course, there’s a montage. The resulting routine is a genre-spanning cheer to a mash-up soundtrack that includes everything from Daphne and Celeste and Blaque to a punk rawk love song some guy recorded on to a mixtape for Kirsten Dunst. It’s a cool, refreshing breeze in a competition heavy with tanned limbs following the same trajectories. The judges don’t know what to make of it before they realise: the cheer paradigm has shifted.

Speedy Ortiz’s new album Foil Deer is the guitar band equivalent of that routine. It’s a breath of fresh air rolling through a scene where there’s plenty going on but everyone’s so busy trying to be everyone else that no one is being anyone at all. Singer and songwriter Sadie Dupuis has taken influences from all over the place and the band has woven them together into something exciting and new. Anyone hoping for Major Arcana mark two might as well go home because Speedy Ortiz are not resting on their laurels.

One thing that’s still here is the Nineties influence - the tired Pavement comparisons are now laced with sultry R'n'B references. In fact, the same Nineties R'n'B that featured heavily on the Bring It On soundtrack fed into the Foil Deer writing process. Dupuis cites Beyonce and Aaliyah as vocal influences, incorporated Timbaland’s production techniques, has said ‘Puffer’ is meant to sound like Kelis and was jazzed when one outlet compared it to 3LW. These disparate genre strands are woven together, plaited into place alongside the twisting turning guitar grunge and Dupuis’s straight-up vocal style.

These poppier elements make Foil Deer feel much more textured, a full blown tapestry to Major Arcana’s cross-stitch, threads interlaced by a band that knows exactly where each other member is about to go. “I’m not bossy, I’m the boss. Shooter of the shots,” Dupuis sings on 'Raising the Skate', a song that sets the tone for the album as one for anyone who’s ever tried to assert their authority while being referred to as ‘sweetcheeks’. One thing you won’t want to do after listening to it is mess with Dupuis. She’s bringing the fight to you in songs laced with a hint of violence both musically and lyrically. ‘Dot X’ warns us “ don’t ever touch my blade you fool” while the heavier songs like ‘Homonovus’ and ‘Zig’ are spoiling to take this outside. As an album it undulates through crescendos and drops back down to whispers, by turns light-footed and menacing.

“Boys be sensitive and girls be be aggressive,” Dupuis sings on ‘Mister Difficult’, echoing the cheerleading principle in a gender-reversing feminist slow-jam that is at once gentle and spiky, and should be required listening for anyone about to write a comment on the internet. ‘The Graduates’ is an anthem for second-bests and runners-up, but it’s the Kelis-alike ‘Puffer’ that is the standout track. Slinking out of nowhere in the middle of the tracklist, it gets right up in your personal space. ‘Puffer’ cries out for a semi-ironic dance routine in a teen movie where the girls have all the power and the boys are left turned on but left out. The snakelike vocals are underpinned by a killer bass line and writhing guitar soundscape before abruptly disappearing into the rowdier ‘Swell Content’ with barely a second to recover.

Just as Kirsten Dunst’s avant-garde cheer was still, essentially, a cheer, what makes Speedy Ortiz Speedy Ortiz is still here - mathematically precise guitars weaving in and out of Dupuis’s words. But with its genre manipulation and intensely poetic, socially aware lyrics, Foil Deer is a stronger, more assertive record with more to say for itself. Speedy Ortiz might still sound like Speedy Ortiz but something has shifted.

What the World Needs Now Is