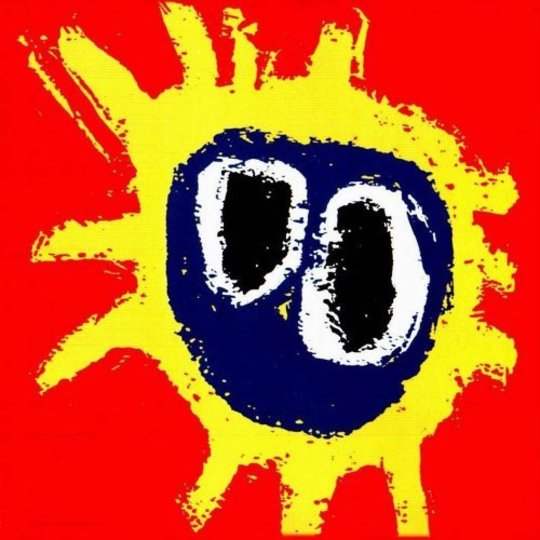 “Yep, I know that feeling”

This sampled phrase that steals in through the first-light melancholy at the end of ‘I’m Coming Down’ (originally spoken by Nastassja Kinski during Wim Wenders' Paris, Texas) goes some way to explaining the longevity of Primal Scream’s third record and its unique place in the British musical lexicon. Whichever particular chemical intoxicant one chooses to believe it is about is open to question (the band have given differing stories), but Screamadelica remains - to many listeners, casuals and clubbers - one of the most starkly unique musical depictions of a drug trip ever put to tape. Emerging in 1991 just as acid house and ecstasy culture was emerging into the mainstream, the album takes you on a journey: the initial tingle of anticipatory excitement (‘Movin’ on Up’) through to the moment of coming up (that jawdropping saxophone interlude, followed by a moment of confused wonder on ‘Higher than the Sun’) through to euphoria (‘Come Together’) and finally to a reflective melancholy and the eventual comedown (‘Damaged’, ‘I’m Coming Down’) before eventually settling into blissful acceptance with one and the universe (‘Shine Like Stars’). A microcosm of a microdot.

The thing is, such a concept should have completely and absolutely fallen flat on its face. The idea of such an album is not only corny as hell to contemplate but also borderline ludicrous to imagine pulling off. Yet somehow it works. And why Screamadelica works so well is that the execution and delivery is utterly organic; overriding any sense of it being simply 'a drug record' and more a unique cultural touchstone for the era. Much is made of the production and quite rightly - the work of The Orb, Andrew Weatherall and Hugo Nicholson on the original record remains magnificent, while Kevin Shields manages to bring a clarity to the sound of this reissue that specifically emphasises the vocals and the basslines, allowing the CD to sound more balanced and crisp. But what is less often discussed is the band’s musical ability. Taut and focused with only the required, correctly judged amount of slack, the record simply thrives within the grooves – so many stunning moments emerging with every track. Somewhat surprisingly, in all the rush to acclaim the likes of ‘Movin’ on Up’ and ‘Come Together over the years, few critics acknowledge the magnificent, Beach Boys-esque ‘Inner Flight’ which is quite simply one of the most sensitive and beautiful instrumentals of the past 30 years; its ethereal transcendence allowing the kick of ‘Come Together’ to fully have the impact it does. It is a beautifully structured, brave and confident record that either through accident or brilliance manages to still sound as uniquely relevant as it did back in 1991. Given that it was released in the very same week as Nirvana’s Nevermind, it is fascinating to compare the two now. As thrillingly inventive and brilliant as the latter is, its multiple copyists and imitators have meant that it sounds somewhat muffled and dated now.

Screamadelica barely sounds as if it has aged a day and much of that is down to the fact that no-one has quite figured out how to get the particular blend of white guitar-pop nous, groove and house music that comprises its 62 sublime minutes, as well as the fact that for so many people, it remains the narcotic experience encapsulated subtly, beautifully and elegantly in aural form.

On a more critical note, there is certainly a question to be raised as to the ethics behind re-releasing the album for the second time in four years but at least this gives fans who weren’t prepared to shell out for the £90 box set back in 2011 the chance to listen to the B-Sides and rarities of the era. And to be fair, most of these are worth the money. The Dixie Narco EP is worthy for the gospel-drenched ‘Steal that Soul’ but especially the outstanding ‘Screamadelica’ track itself – nine minutes of stunning, shimmering acid house that really could have stood alongside Flowered Up’s ‘Weekender’ in terms of iconic status, had its namesake album not overshadowed it.

The third CD serves to illustrate the influence the record had on dance producers, with a whole CD of remixes. Of these, the best are the exceptional dubby Hypnotone Brain Machine mix and the robotic BBG mix of ‘Come Together’, The Orb’s woozy take on ‘Higher than the Sun’ and Graham Massey’s stripped, industrial mix of ‘Don’t Fight It, Feel It’. The strange thing is that as good as they are; none of the mixes quite manages to usurp the original in scope and quality, showing that in their original execution, Primal Scream – a white indie band from Glasgow – managed to somehow out-dance dance music.

The final CD is a fascinating concert from the Hollywood Palladium in 1992 which shows the band’s ability to effectively and impressively reproduce such a unique record in the live arena, even if the best moments come when they decide to do something completely different: most impressively the complete about-turn of ‘Higher than the Sun’ which descends into a glorious ambient haze and a spectacular ‘Damaged’ complete with a shiver-inducing crowd chant accompanying the band.

The question of whether Screamadelica needs another re-release is certainly open to question. But what this collection does allow is for the listener to appreciate the holistic environment that the record grew from and the resulting influence on the dance community – not quite the full picture but a close approximation, vital for a record so inherently tied to its cultural surroundings. Screamadelica was an album that managed to uniquely synthesise a diverse and original culture and splice it together with guitar music to create a record which opened doors to many indie kids who would never have dreamed of checking out obscure names such as Frankie Knuckes and Marshall Jefferson. But in acknowledging its influences, it also marked out its own legacy by virtue of being truly original, unique and timeless – a record that still stands amongst the greatest British releases of all time. “Hallucinogens can open me or untie me” breathes Bobby Gillespie just before the moment of emergence occurs on ‘Higher than the Sun’. It’s still gloriously obvious that it was the former holding court from 1990 into 1991. If the 'Second Summer of Love' lives on anywhere, the grooves of this record are as good a place as any to start searching – the colour, the brilliance, the optimism and the adventure are captured here forever. Screamadelica is a record shaped from chemicals but coloured and finished by sheer human joy and overwhelming emotion.

Science & Magic: A Soundtrack to the Universe

Paul Draper on The Prisoner, Portmeirion and Ma...