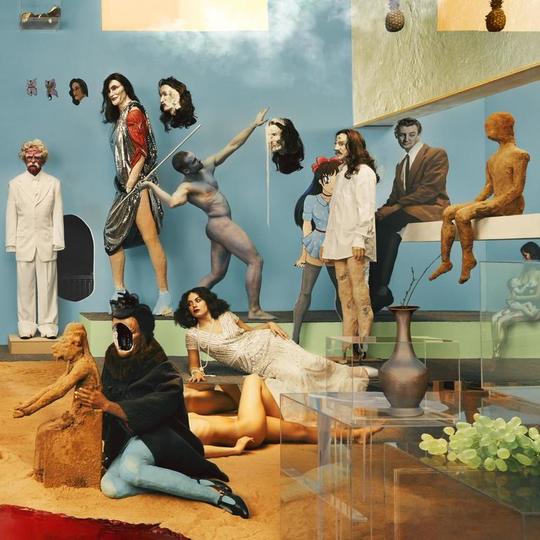 'I'm so obsessed with whatever the hell this was' reads the top comment on the YouTube page for ‘I Am Chemistry’, the first single from Yeasayer’s fourth album. 'And this kids, is what I call.... uhh.... I don’t know actually' is the second, with 'lolwtf' not far below. And yeah, part of that’s a reaction to the video, a Dali fever dream of writhing, hyper-sexual clay, but it’s just as much a response to the song - a writhing, hyper-sexual clay of beats and synths and 'Tiny Dancer' piano that segues from Chris Keating’s macho boasting to folk singer Suzzy Roche promising never to handle the deadly quaker buttons again. First time through it’s pretty weird. Fifth time too.

It’s stranger still when heard in context, emerging from the Pink Floyd prog harmonies of album opener 'Daughters Of Cain', the cloistered tone giving way suddenly to driving reverb and pooling bass. But then the Brooklyn three-piece have always been pretty jarring, veering from the campfire psychedelia of 2007’s 'Wait for the Summer' to the warehouse rave of 2010’s 'Love Me Girl' and the broken R&B of 2012’s 'Henrietta' - heck, frequently their songs swing through genres faster than verses. And Amen & Goodbye’s no exception, taking in acoustic strumming and polite applause, harpsichord and lounge piano, blasts of brass and shrieking guitar lead behind their characteristic twine of melody and rhythm, at once exhaustingly eclectic and precision focused.

But where this album sets itself apart is with Roche, her contributions otherworldly and out of time, strange Wicker Man chants both charming and sinister. Her siren song laces Amen & Goodbye's best moments, from the swirl of voices that closes 'Half Asleep' to the half-heard mantras that back 'Gerson’s Whistle', both tracks grandiose assemblages that move Yeasayer past their knack for compelling psych-pop towards something more transcendent: religion might form the lyrical narrative throughout but it’s here that the songs themselves start to feel like worship.

Psych-pop still makes up the bulk of this, though, from the kaleidoscope bounce of 'Silly Me' to the vocal hooks and trumpet squalls of 'Dead Sea Scrolls', and in the main it’s still compelling. Granted, there’s some lulls - 'Prophecy Gun' stretches out its single idea at least two minutes too long, and the album’s closing run, from 'Uma' onwards, washes over without leaving much behind - but the level of imagination and invention elsewhere more than mitigates them. Perhaps that’s producer Joey Waronker’s doing: as the drummer for Beck and Atoms For Peace he’s seen close-up how disparate elements fuse together, sounds collided and colours meshed like, well, like clay.

And with that we’re back to the 'I Am Chemistry' and the creature emerging from the astronaut’s crotch, the nude figures dancing and the moss-green Teletubby things regretting fooling with Oleander, only now it all makes sense - just go with it and this is great, a twisted, twisting fable that doesn’t care about logic or form so much as just moving ever onwards, rhythmically kinetic and sonically hyperactive, barely settling for fear of falling still.

Everything You've Come to Expect