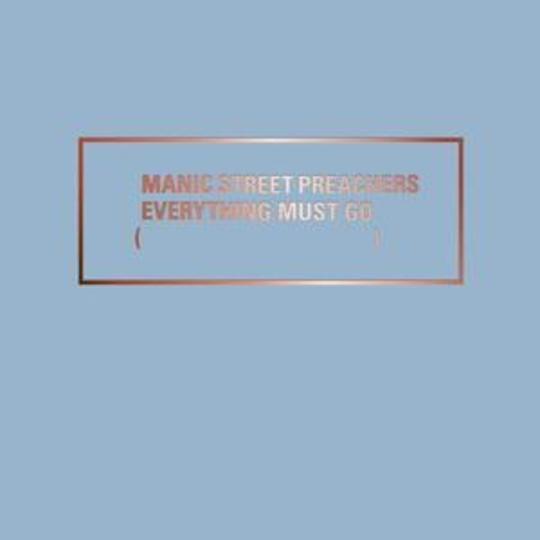 Try to imagine yourself in the position in which Nicky Wire, James Dean Bradfield and Sean Moore found themselves in 1995. Your entire adult life (and a bit before that) has been spent making music with your best mates. You’ve just made a gut-wrenchingly personal, career-defining album which tears open the soul and brain of your creative figurehead, leaving it bleeding all over a slightly bemused public’s headphones. And now, as sudden as it is cruel, this person is suddenly taken from you - Richey Edwards disappears, never to be seen again, leaving the remaining three Manic Street Preachers in the awful situation of having to grieve their lifelong friend and eventually figure out what the fuck to do next.

Of course, you probably know what they went on to do. Carrying on as a trio brought them a sustained period of commercial success, and at the time of writing they’ve made three times as many albums without Richey as they made with him. For the hardcore Manics fan it’s weird to consider the fact that he actually had a direct hand in a relatively small part of their discography. His shadow, however, unquestionably looms heavily over the band’s entire history.

More than enough has already been said about the first recorded taster of the Manics after Richey’s disappearance, but that’s simply because ‘A Design For Life’ is one of the most significant pieces of music that any British band has ever produced. Even 20 years on, it’s still jaw-dropping that their first piece of music after such unimaginable personal trauma could be this triumphantly undulating hymn to the working class, still one of the most gorgeous pieces of pop music in history.

Understandably, there’s nothing on Everything Must Go to quite match its wonder, but that’s not a denigration of the album. Indeed, it houses not only some of the best post-Richey music the Manics ever made, but some of their best songs full stop. The title track in particular is an exercise in pure catharsis, a painfully honest cards-on-the-table lyric about coming to terms with your past wrapped in a bombastic pop song, accompanied by an all-too symbolic video.

‘Enola/Alone’, meanwhile, is a pretty standard chunk of Everything Must Go musically, driven by some textbook melodic riffing, but it stands out primarily for some of Nicky’s most naked and affecting expressions of loss. The lines “I’ll take a picture of you / To remember how good you looked” place him in front of his wedding photos looking at two loved ones who are no longer in his life (Richey, of course, and the band’s former manager Philip Hall who died in 1993). The theme of defiance in the face of heartbreak is one which permeates the entire album, and it’s never more powerfully embodied than when James sings “All I wanna do is live / No matter how miserable it is”.

It’s not all late Nineties rock thrills, though. One of Richey’s five lyrical contributions to Everything Must Go, ‘Small Black Flowers That Grow In the Sky’ sticks out like a sore thumb at the album’s centre. A densely concise treatise about a caged animal is juxtaposed with a gorgeous harp arrangement to make one of the saddest songs the Manics ever produced. It’s without parallel as the darkest moment on Everything Must Go, and serves as something of a precursor to the macabre lyrics which would emerge in 2009 on Journal For Plague Lovers, the album which would make full use of the notebooks Richey left behind.

To paraphrase Everything Must Go’s title track, Manic Street Preachers have never been a band to escape from their history. As such, as galling as repeated reissues of records can sometimes be, at least this one brings some kind of new material to the table. A remaster of the studio recordings of the album is packaged with the full 20-song recording of their 1997 show at Manchester Nynex, including seven which didn’t make the cut of the gig’s VHS release Everything Live.

This recording embodies all that is good and not so good about the band’s new-found status as arena-fillers. It’s wonderful for a fan to hear them playing songs like ‘Faster’ and ‘Roses in the Hospital’ to the best part of 15,000 willing punters, and given what the Manics had been through, it would be horribly churlish to say they didn’t deserve this. Indeed, it’s quite the lump in the throat moment when ‘Yes’, one of their most poignant and darkest songs is greeted by squeals of unfettered delight from the crowd.

As a live performance, it’s a great example of a band at the top of their game - they’re clearly on sparkling form, revelling in their environment and wearing their pasts on their slightly more expensive sleeves. ‘Motown Junk’ in particular becomes an unlikely piece of powerful arena rock, upgrading the tinny 1991 original recording to a ferocious fireball of energy preceded by James’ slightly sarcastic take on The Supremes’ ‘Baby Love’. Predictably enough, ‘A Design For Life’ is the apex of the performance, lending itself perfectly to the wave of good feeling, with Nick Nasmyth’s keyboards beautifully replicating the wash of strings from the record.

This additional ingredient, though, so effective at times, can also make the recording feel a little stodgy and somewhat bloated at times. Perhaps it’s just an unavoidable consequence of suddenly making the step up to playing shows in these glorified aircraft hangars, but hearing such raw and incendiary songs as ‘You Love Us’ and ‘Stay Beautiful’ so superfluously soaked in keyboard robs them of just a little bit of the fiery energy which made them so addictive in the first place. That said, though, most Manics fans old and new should still find plenty to love in reliving such an important show in their history.

As far as the remastering of Everything Must Go goes, the nicest thing I could say is that it’s an interesting experiment in bringing a 20-year-old album up to date. As the years have progressed, the original recordings have certainly felt more and more ‘of their time’, but is that really such a bad thing? Can an album not remain a document of the time it was made? There’s no question that the new mastering does a lot to improve the sharpness of the recordings, but it also seems to have the unfortunate side effect of making a particularly emotional record come over just that little bit sonically sterile. It’s a pleasing curio to hear once or twice, but it’s pretty difficult to imagine this ever being considered the definitive version of Everything Must Go, especially by anyone who’s spent the last 20 years obsessively poring over the record.

All in all then, Everything Must Go 20 might not be a terribly necessary release in the grand scheme, but as a celebration of an album which has meant the world to a hell of a lot of people, it’s pretty successful. It’s not going to make you fall in love with Manic Street Preachers if you didn’t already feel that way, but if you’re already enlisted into the cult of The Band That Likes to Say Yes, it’s a lovely piece of nostalgia and an indulgence which the Manics and their fans have definitely earned.