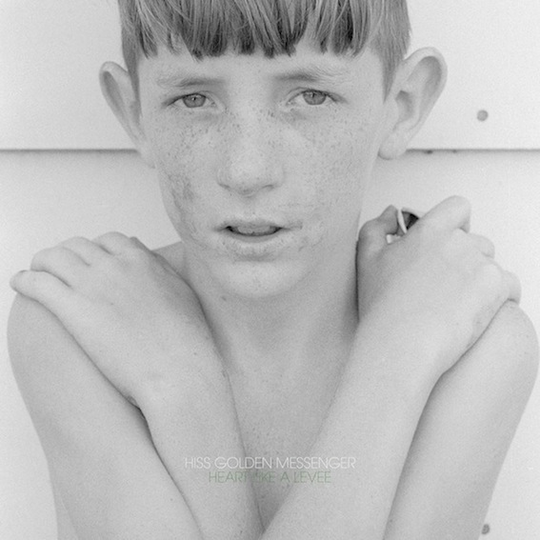 Considered in vacuo, Heart Like a Levee could be about anything and everything. It’s exquisitely written: 11 songs of folksy Americana, channeling the likes of The Band, but never straying too far from its gospel influences either. Music from a classic school of songwriting that, on occasion, veers into lush, orchestral, almost noisy territory. But as enjoyable as the record is on initial audition, there’s a nagging: what’s this really about?

The lyrics read as profound, a valiant reach for something universal, but in practice the brush strokes seem too broad to mean anything in particular. “Say it like you mean it/if you don’t mean it/it don’t mean nothing at all,” sings MC Taylor. He sounds as if he means it. But I’m not sure what he means, if anything at all. It is, we are informed proudly and eloquently by the press release (but in a way that only really muddies the situation) a record about “leaving and returning, belief and trust, guilt, honesty, and life on the road”. Not much in the way a foothold. Then I find this, (posted up at the Merge site)[https://www.mergerecords.com/hiss-golden-messenger]:

… at [the time that I started writing these songs] I was feeling—more acutely than I had ever felt before—wrenched apart by my responsibilities to my family and to my music. Forgetting, momentarily, that for me, each exists only with the other. How could I forget? Though maybe my lapse was reasonable: I had just quit my job, the most recent and last, in a series of dead-end gigs stretching back 20 years, with the vow that my children would understand their father as a man in love with his world and the inventor of his own days. They would be rare in that regard. And then—driven by monthly bills and pure fear—I left for another tour, carrying a load of guilt that I could just barely lift.

Suddenly Heart Like a Levee is unlocked, its outline and its parameters clarified. What seemed like songs written in complete abstraction become very direct. This is music written about music. Songs that know themselves. Know their own necessity, but know also that their necessity tugs on a duty to family and to friends.

‘Biloxi,’ previously an opaque reference to an unfamiliar city, now seems a measure of distance from home. Its refrain—“it’s hard Lord/Lord it’s hard”—yelped in harmony over a bed of hand percussion and metronomic strumming, was once platitudinous. Now it has some purchase. So too the title track, a simple but perfectly crafted song, dressed up with dancing mandolins and electric guitar in counterpoint: “swing for the mountain, double time/is it too heavy honey?/did I carry my piece of the fight?” These words now speak, and speak clearly, to worries of family duty unfulfilled. In hindsight, ‘Cracked Windshield’—a languid, tired-of-the-fight number—is blindingly explicit: “a song is just a feeling, when you make it pay the rent… I was a dreamer, babe, when I set out on the road”.

Heart Like a Levee reveals itself, slowly, to be a deceptively honest record. It confronts the pragmatic challenges of being a working musician head-on: rarely, for Taylor, do the demands of being a father, a partner, a musician, a friend, a person of creative endeavour—in his own words, a dreamer—fit neatly alongside one another. This record—despite its seeming reluctance to yield specifics to the listener—is a very sincere set of Americana numbers, crafted with care and precision, held aloft by the tactful musicianship of a supporting cast that includes Brad and Phil Cook (of Megafaun; the former lends production chops, track down the latter’s Southland Mission for further listening), Tift Merritt, Matt McCaughan (Bon Iver), and Alexandra Sauser-Monnig (Mountain Man). One just in time for the autumn, and then some.