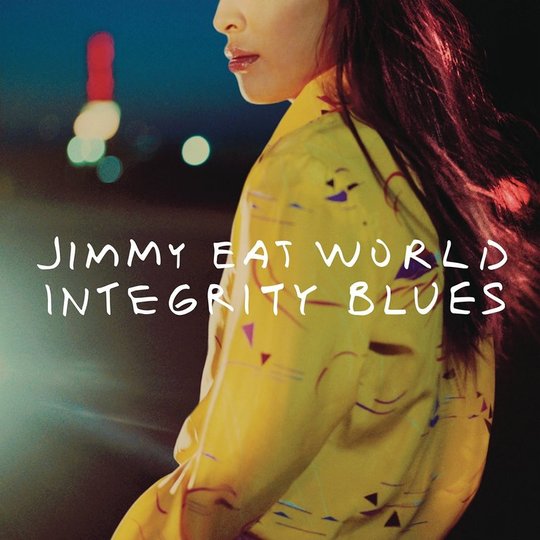 Every train journey has its perfect musical accompaniment – a fortunate correlation of passing landscape, time of day and listener state of mind that brings new depth and meaning to the chosen record. These moments can never be repeated – any attempt at replication always ends in failure.

I’m on the Newcastle to Edinburgh train – it’s just after 8:30am and I’ve been in my seat for about an hour. I’m sitting on the right-hand side, so I can get the best views of the sea and the broken shoreline as we pass from England into Scotland. Jimmy Eat World’s new album, Integrity Blues, is in its second run-through of the journey. I’ve decided to listen on shuffle this time, which isn’t usual for me. Instead of ‘You With Me,’ instead I hear ‘Get Right’ first and my mood changes. Every Jimmy Eat World release arrives pre-steeped in nostalgia, and ‘Get Right’s little pull from Futures has a pleasing familiarity that makes it very welcome. It’s not a facsimile, but an update of a period I consider to be their best. There’s a downtuned riff that sits on the pleasant side of aggressive, allowing Jim Adkins to expertly control the direction of the song through the rise and fall of his voice.

In an interesting coincidence, the other two pre-release tracks appear next. ‘Sure and Certain’ is shiny and immediate, with a subtle build and release that comes only with experience and an innate knowledge of your own band. I’d hesitate to call it masterful, but it’s not far short. While enjoyable, ‘You With Me’ offers little to distinguish itself from the middling output of the band’s last few records, and I’m growing a touch weary again. It’s begun to rain outside, and the smell of the train’s brakes irritates my nose as we approach Berwick-upon-Tweed.

My favourite part of the journey is here, and as ‘You Are Free’ finds its way to the top of the pile I find myself scanning my music library for something I appreciate as much as the scenery. However, as we pass the caravan park outside Berwick and the landscape opens up, ‘You Are Free’ reaches its chorus and I drop my phone to my lap and drink it all in. This is the true strength of Jimmy Eat World (and pop music in general) – an innocuous switchup that elevates song to experience via simple melodic phrases, immediately relatable on a personal level.

With this door now open, the rest of the songs flood through unopposed and the view one-ups itself with every corner. ‘It Matters’ has an innocent longing, completely archaic (”I dream of talks that last all night” but delivered with a straight face and an edge of animosity to wholly sell the narrative: ”When you pull away / I say it matters”;. It’s served well by another big pop melody, pushed to the fore by Tegan and Sara producer / M83 bassist Justin Meldal-Johnsen. ‘Pass the Baby’ adds some teeth to the whole affair, malcontentedly growling for a few minutes before launching into a breakdown reminiscent of late Smashing Pumpkins. It’s a little try-hard, and the friendly production doesn’t quite grant it the blood it deserves, but it succeeds nonetheless.

It’s a wonderful thing to hear Jimmy Eat World rediscover the form that stretched from Clarity through Futures. While they’re unlikely to achieve the same reach awarded them by ‘The Middle’ (although Taylor Swift’s endorsement won’t hurt), their dedication to honest, wide-eyed songcraft has resulted in their best album in over a decade. By the time I depart the train at Edinburgh, it’s stopped raining, too.

Running Out of Love