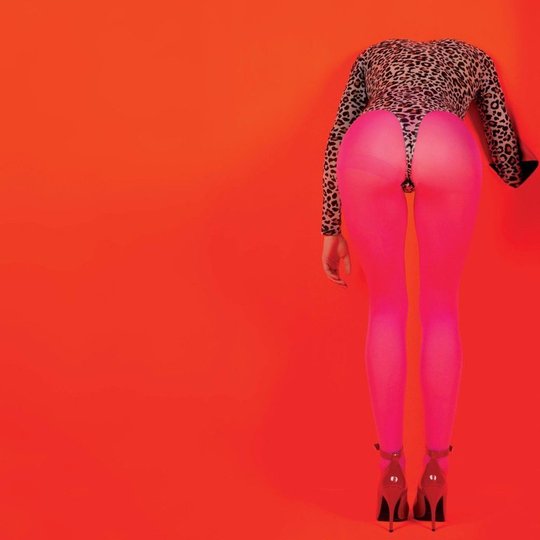 Full of glorious contradictions, Annie Clark’s fifth St Vincent album, Masseduction, is leaded with pitch-dark content but sounds so wonderfully joyous at times that it’s hard to feel too oppressed.

With a palpable honesty, she sings intense stories of lust (‘Savior’, playing erotic stock-character dress-up as nurse, teacher, nun, with an outfit that “rides and sticks to my thighs and hips”; ‘Young Lover’ bluntly admitting: “I miss the taste of your tongue”) and love, but always skewed to the fatalistic, dangerous or gone-wrong varieties. “You and me, we’re not meant for this world”, she intones in the dramatic, gripping opener – almost revelling in the doomed nature of the affair. Key track ‘Los Ageless’ repeats, like an incantation or a plea: “How can anybody have you and lose you and not lose their mind too?” Its East Coast sister track ‘New York’ sorrowfully accepts that “You’re the only motherfucker in the city who can handle me”.

Death is hinted at, fatalistically, on several occasions, from ‘Sugarboy’s admission of a “crush on tragedy” to the apocalyptic ‘Fear the Future’ which imagines “the earth split in two”; with suicide alluded to in both ‘Smoking Section’ and ‘Young Lover’. The title track’s description of a “smiling nihilist”, though, gets closest to the heart of the album’s mood.

Which is, despite the darkness, extraordinarily uplifting. The contrast between the words which are being sung and the fabulous, synth-strewn, pulsing, riff-heavy music, the instantly-moreish melodies and the gorgeously-delivered vocals is dramatic, but somehow not jarring or dissonant. Take the Giorgio Moroder-slick disco and glossy vocals of ‘Sugarboy’, say, dragging its tragedy onto the dancefloor, or the frenetic ‘Pills’: both confessional and strangely comedic.

At the album’s mid-point is one of its finest moments, and one that somehow stands alone. ‘Happy Birthday, Johnny’ is simple, straightforward, unadorned and quite, quite beautiful. Presumably sung to the same Johnny as the ‘Prince Johnny’ on 2014’s St Vincent, it combines a simple melody with a hugely touching tribute/apology/message to a – what: friend? brother? ex? – who is clearly troubled and struggling. It’s lovely, and so intimate that you almost feel like an eavesdropper for listening to it, as the singer admits, baldly: “Of course I blame me”.

But such is the quality of the whole album, from its set-piece bangers like ‘Sugarboy’ and ‘Los Ageless’ to the gentler, more elegiac moments of ‘New York’ and ‘Smoking Section’ (“What could be better than love?”), it’s that treasured thing – a piece of art that works in its entirety. You wouldn’t want one track or note to be changed or left out. It’s a genuine masterpiece: complex, funny, sexy, bleak, uplifting, inspiring and enthralling from start to finish.