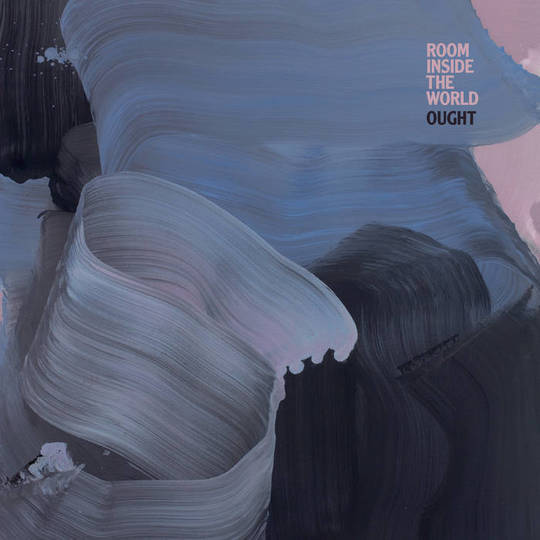 Right. I’ve tried to pull myself out of this review, but I absolutely cannot. Someone must stand here, on this hill, with this rose and these thorns and this blood. My hot take boils down to this:

What do the record collectors (read: certain dudes) want out of Ought? They seek an increase of the chaos, monologues and tempests to obfuscate humanity and push farther into the stratosphere of the obscure (or just the back catalogue of the Fall). For them, music carries no psychic impact – or, if it does, that doesn’t figure into the physical/objective standards by which such carpentry should abide by. The shift from Montreal’s experimental boutique Constellation to everyman indie showroom Merge worries them, as if popularity would diminish the final product.

Meanwhile, what do I want out of Ought? My odyssey resembles that which Jasper Willems described back in November: dialogue, constant dialogue. Affirmation. Both Today, More Than Any Other Day and Sun Coming Down came to me at a time when I could not deal with myself - lost job, no paying gig, unfamiliar city, the pervasive sense that my knack for words meant nothing. Here, in both these surging seas, were other souls that swam against mundane turmoil, only the inner, and so raucous and righteous was that swimming. And ladies and gents – ha! Tim Darcy denies the term 'love', perhaps for the loaded sentiment, how the notion deflects intelligent reflection. But fuck it, fuck it, fuck it, when I first heard Darcy flail against these currents, I wanted to love him, yes. I wanted to return what I received. ‘Gemini’ tattooed itself under my skin. YOU’RE ONE OF A KIND, ONE OF A KIND.

To that fan, the one that fell in love - Room Inside The World was written for you. Well, you, and anyone else who’s felt pushed out in any way – out of a country, out of the insider boys’ club, out of the record snobs’ communion. ‘Disgraced in America’, with its refrain of demarcation wears me thin / demarcation does me in, speaks the most directly to these divisions, but everything about Room invites inclusion: the broader palette from keyboardist Matt May, the warm hues of clarinets and saxes, the cleaner lines from Ben Stidworthy and Tim Keen, Darcy’s ever-blossoming voice.

Flowers come often to hand when I describe Darcy now. That’s his own doing, mind: for his solo sojourn Saturday Night, he shot several blurry pictures of blooms, which he then sent six months after the album’s release to anyone who offered comfort. Plants offer the closest analogues of his flourishing mastery – the depths and hues he tapped last year now tower like palm trees over the sand (‘Into the Sea’), poke gently like ivy through old brick (‘Brief Shield’). There are no barbs, no thorns, no whipping branches; indeed, by the time we reach the twilit lake of ‘Alice’, Darcy has succumbed to us, and can barely stay afloat as the band’s humble vessel drifts into incoming fog. The bro contingency wants the attack, intransigent wit that pins down a stance – and instead our protagonist has committed himself to transparency, to transience, to the flutter and the yield of imperfect beings –

Ah! Reader, we dwell, but only to iterate and reiterate that Room… offers so much, especially for the imperfect and fluttering. Lead single ‘These 3 Things’ might irk Ought purists the most with its quirky Eno-ish beat and Keen’s precision-cut violins, but the struggle depicted within – of two souls trying to lose themselves on the dancefloor – resonates for the lonely gig-goer. ‘Brief Shield’, meanwhile, promises fellowship in the simplest gestures, caresses for the weary, solace from ”the shadow on the land…the ugly years of violent men”, with slowness and sweetness and catharsis. In a similar vein, the congenial ‘Take Everything’ recognises and questions the submissive default imposed upon women, and posits space for our ambition. And ‘Desire’! Oh! Haters are gonna hate the Mellencamp balladry here, replete with the full-blown choir toward the end, but – HA! LOVE! And not just that, but Darcy nails so well that giddiness, how nigh impossible that is to contain or communicate, and the terrifying prospect of the unrequited passion, with complete empathy for those that should covet his image.

Now, sure – I actually caught myself in an argument with an anonymous record bro over Room…, who tried to tell me that Ought now sounded 'post-punk and a bit dark like everyone else'. We can debunk this easy: of the nine vastly different chambers that comprise the album, only two could pass under that accusation. And fine, ‘Disaffectation’ stalks in a straight line, like early Cure – but there, and in the more National-esque opener ‘Into The Sea’, you can’t trace the usual misanthropic vein that plagues post-punk. It’s funny – Sun Coming Down’s ‘Men for Miles’ might have rocketed faster and rocked harder, and could have been more easily claimed by anyone who wanted to posture as feminist, but Room…’s first act serves the same purpose – y’know, to prove that Ought sit on the right side of the fence. Just here, no one’s pointing any fingers. "I can’t be here in my way again," Darcy swears. Even the most righteous must stay vigilant against their own ego. That’s not a common sentiment among “everyone else”. Not to mention, explorations in sound still abound – the darker turn in the pleasant ramble of ‘Disgraced in America’, the slow-motion collapse of ‘Desire’, the gentle violin and guitar duet that wraps loosely like ribbons round the end of ‘Brief Shield’.

Ergo, even with the carnations in the lyrics pulled out, Room… remains Ought’s most beautiful – yes, beautiful – album to date. And see, you disgruntled record bros, empathy and beauty are what we need right now – well, OK. Empathy and beauty is a) what the tired masses need, to escape from the messy and vicious forces that spew hate into our ranks and divide us; b) what women need, to re-establish trust between us and good men after the #MeToo rift disrupted (and continues to disrupt) camaraderie between genders; and c) what I need, because I hide this stupid bleeding heart that shouldn’t ache this bad, should’t crave this bad, shouldn’t even be in this damn review – but it’s here, it craves, it bleeds, and Ought is telling me that’s OK, I am valid, I am welcome.