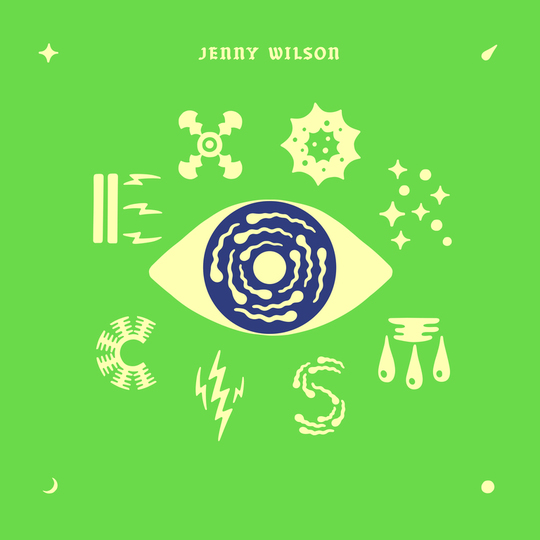 Gustaf Holtenäs’ animated visuals for ‘RAPIN*’, the opening track on Swedish electronic artist Jenny Wilson’s new album, are beautifully rendered, filled with languid movements and bold colours. Then you dig deeper and find a psychologically disturbing minefield, a rush of imagery leading to the protagonist’s own body being slowly sliced in two and violated by a shady other figure, falling repeatedly into a black hole in the aftermath.

It’s a bold clip that stares the harsh reality of its subject matter squarely in the face, but that just makes it an ideal accompaniment to Wilson’s own words, the devastating action painted in all its stark viciousness. As Wilson herself sings, it’s an assault that doesn’t just pierce the body, but also shatters the mind and even a sense of self: “Two days later I couldn’t speak, I couldn’t sleep/ I couldn’t find out how to be me.”

The tone is set for the rest of Wilson’s fifth album Exorcism, a deeply, brutally personal album, one that details her own experience of sexual assault and the emotional trauma that came in its wake. As its very title suggests, it’s something of an expelling and expositing of the recurring psychological disturbance that she suffered; in the six months that followed the attack, she wasn’t even able to touch an instrument, not knowing how to approach what happened to her.

With the help of her Prophet 6 synthesiser though, Wilson has laid bare, with no holds barred, this most devastatingly personal of experiences. The very choice of synth itself, the analogue drones and whirring electronics Wilson produces in themselves lend their own sense of ruthlessness to the album. As each track builds up a foundation of looping, propulsive, but often quite stabbing and piercing melodies, they develop the feeling of claustrophobia, of being trapped inside a psychological terrain that’s been warped by a single act of cruelty, the often relentlessly pulsing nature of many of the tracks seeming to symbolise the everyday, lingering trauma that rattles around the mind.

Upon this ceaseless foundation, Wilson doesn’t hold back. The details of the experience and its long-term effects are presented in the most direct, plain language possible. There’s no metaphors or veiled allusions here. She takes on the truth head-on, giving the listener the details all their unflinching callousness. The fact that her voice often contorts and bends, wrapping her words in raw emotion, only lends to the force of what she divulges. As her vocals almost turn into a wail on ‘Your Angry Bible,’ the anguish and pain she feels is bitingly real.

The first few tracks on Exorcism address some of the short-term issues surrounding the assault. On ‘Lo’ Hi,’ Wilson details trying to prove that her assault was real, that it was completely non-consensual, defiantly saying “listen close, I said no.” The fact that she sings this mantra in an almost childlike, sing-song manner, her voice warping and becoming more frenzied as the track progresses, just makes her plea to be believed all the more powerful. ‘Disrespect Is Universal,’ meanwhile, tackles trying to identify her assailant in a line-up. She brings out the immediate stress of the situation, and the seemingly ordinary appearance of the attacker: “blonde hair, nothing special/ Could be anyone.” On the cascading, frenetic ‘The Prediction,’ Wilson goes on a desperate search to find reason in her attack as she demands for someone to “explain it to me.”

The long-term effects of sexual assault are equally as divested on the record. Wilson makes it clear that the ordeal is not over once the attacker has been identified; the victim still has to live and try to come to terms with the crushing consequences of a life-shattering experience. It manifests itself in different parts of life, not least, as Wilson details, within personal relationships. ‘It Hurts’ is a regretful song reflecting on a torrid relationship coming quickly in the wake of the assault but, as ‘It’s Love (And I’m Scared)’ shows, emotional and physical intimacy with another person can be especially difficult when those same boundaries have been forcefully and aggressively violated by another. Wilson lays out that trusting once again is a long, difficult road, yet still laments “I cannot regret what I felt for you.”

By the album’s end though, Wilson appears to be able to show some vulnerability towards another. On closing track ‘Forever Is A Long Time,’ Wilson entreats another to “stay with me,” even through her dark times. It’s a chink of light seeping into the darkness that’s come before it. “It’s gonna be alright,” she sings. After she’s guided the listener through her own, fearless narrative, it’s a sign of the wounds finally, gradually healing. Exorcism is very often an uncompromising listen, but the truth that Wilson exposes makes it hard not to galvanise around her. Her sheer unwillingness to sugar-coat the truth is harrowing yet inspiringly brave.