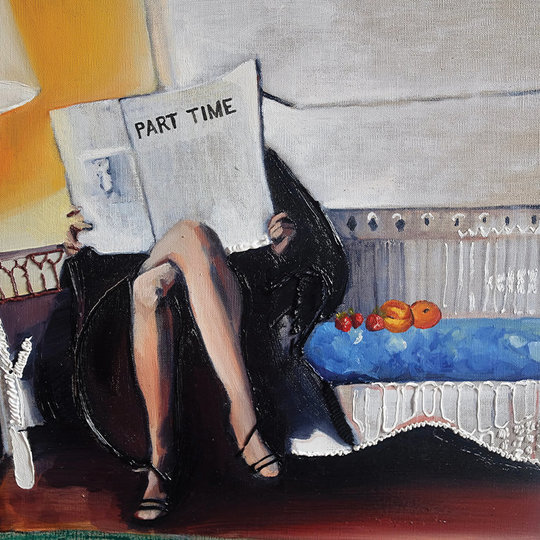 Grunt. You know how the reissue business became a cottage industry, right? Two words: lost legend. You’ve heard the story before, or at least read something on Boomkat. Someone wrote an album or two, or five, or twenty. Someone moderately famous (or just a label curator) found those albums unmarked at a record store, brought them home, and deemed them amazing enough to put out again. Or some moderately less obscure cult artist used to tour with the ‘forgotten’ artist, and has now rallied to unearth their old pal’s work. Either way, the reissued works come shrink-wrapped in this myth of the displaced genius, which begs the listener (and, by extension, the record-buying public at large) to grant the poor sap a second chance. Who needs popularity, if you can carve out a place in the Authentic Underground Auteur canon 20 years after your prime?

I’d be lying to you if I claimed to know even half of David Loca’s output as the pseudo-Eighties pet project Part Time. From what I understand, the Los Angeles scenester has been hanging around since the late-Nineties in other folks’ bands, and then branched off into his bedroom to dwell in a parallel pop reality where he could fabricate a legacy through sheer persistence (and lots of twiddling on the synths). I’m not too sure what makes Spell #6 a noteworthy breakthrough - Loca still role-plays as an also-ran synthpop casa nova, and still mashes himself into irrelevance with flat production and uninspired love songs. He’s got a few bops, true - and you have to marvel at anyone with the audacity to wedge a full-blown harmonica solo into such an unabashedly uncool, China Crisis-ish romp like ‘Shattered Love’. But when Loca says that he ‘writes in different characters’ – well, if that’s what he wants to call his sopped-up stereotypes, then so be it.

To be fair, you can’t call Spell #6 a bedroom affair anymore - Loca actually camped in a studio to nail these songs down, and you can kinda tell. The one-two volley of ‘Before You Fall Apart’ and ‘Hide’ demonstrate a thorough understanding of how to knock out a new wave hit – just enough momentum to keep running on the treadmill, just enough lift to pretend that a perfect romance waits right above your cigarette smoke. Think the Church without the mystery (the latter, especially), or if Billy Joel settled down with the Only Ones and things worked out for a minute before their schedules split apart. Nothing to write home about, per say – both ‘Hide’ and the AOR-bound, Orchestral Maneuvers In The Dark-esque ‘So Far Away’ talk about assisted escapism, an old pop standby - but for about half the album Part Time makes the new wave shtick work.

Then we reach the title track halfway through, and Loca switches tactics. Once again, you have to admire the glimpse of audacity, to inject a dewy-eyed ballad dedicated solely and unironically to falling in love. In fact, he literally asks us, I’m in love, can’t you see?” – which could have been charming in the right setting, but in this twinkly six-minute crawl, Loca seems to demand empathy - and, by extension, visibility - from the audience. Likewise, ‘It’s Alright With Me’ wedges in a heart-to-heart chat with blatant shades of Crowded House blues (i.e. ‘Don’t Dream It’s Over’, especially). Somewhere in the middle, ‘The Boys That Make Her Cry’ tests your patience with Loca’s flippant Thin White Duke impression; indeed, with no substance but the usual tra la la, a silly song for a silly woman trope to show, our protagonist seems to be pulling his best party trick to a captive audience. “Hey, wanna see me do Bowie?”

If Loca seeks a legacy, then an album this late in the game shouldn’t taste so stale. Even the duet with Ariel Pink, ‘I Can Treat You Better’ (yup, another man-knows-best-for-woman trope) droops into the background, as the esteemed guest simply phones in backup vocals. After all, no modern pedagogic icon could rescue Part Time from their outdated infrastructure – some could call these hackneyed pillars part of the artist’s storied ethos, but I’d call that architect out for throwing up a quick fix that’s only going to block the road for months.