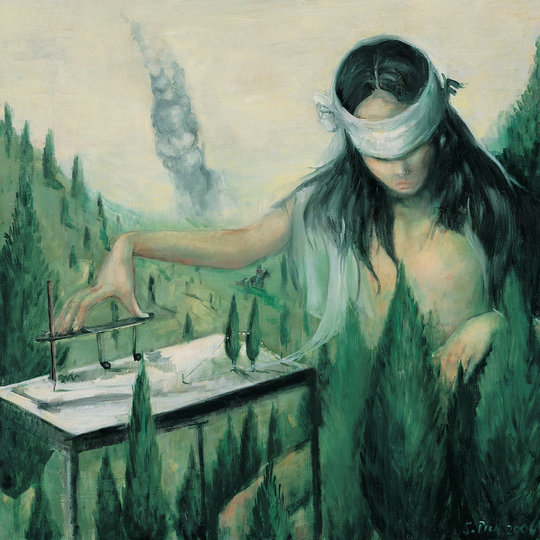 A debut album from a New Zealand native now residing in Berlin with a penchant for mixing piano and experimental electronics who has co-produced pieces for performance as well as being an alumni of hip-hop band Doprah: there’s a lot in the mix for indi – the moniker of Indira Force – and she brings it all to her debut. But what could be overwhelming and incoherent is a fascinating and exploratory piece.

Precipice is experimental pop, gutsy and brutal in places, ethereal and dreamlike in others as it moves between analogue and electronic. It showcases an artist skilled enough in composition and songwriting to confidently push gently on the boundaries of both. There’s elements of Great Raven, of Four Tet, of Gazelle Twin and while this album is less immediate it is no less imaginative.

Opening with ‘Demeter’, the soft layers quickly give way to an awkward flurry of piano notes before the track blooms - gossamer light vocal around the shimmering percussive beats. It sets a tone, if not a style, which will be carried through the album.

‘Cair Paravel’ has a Baroque feel and a multi-part vocal harmony and juxtaposes nicely with neighbour ‘Precipice’, a crunchy industrial and altogether darker piece. For all of the former’s romanticised pastoral layers, the latter brings scratching and shadowy edges.

‘Airportal’ brings the two sides together, a mournful march of slow handclaps and spreading beats, whispering-breathless vocal, against the solid break of brass and the eventual outro of waves gently breaking. ‘Tabletops’ is quite different yet again - but coherence is found in the vocal style and the carefully constructed piece. Piano, and sparse vocal it is a brief track at just over two minutes it cleanses and offers a lightness before the pinnacle of the debut, ‘Woman’.

Tribal vocals, with a chirruping high against a brassy low, echo before all else drops away to let them take all attention. Unconventional in construct it leads the listener through different rooms of sound, keeping different elements as it goes, but twisting slowly so you never feel you can really grasp it, really know it.

The album too can be a hard listen in places - ‘Pith’ is as discordant and unsettling as a rusty gate creaking in a forlorn wind, but for those who want to be immersed in a soundscape and who relish light and dark even these pieces on the edges of convention and comfort will be welcomed.

The record closes with ‘Cannibals’, and comparisons to Bjork are easy to make both in vocal style and otherworldly buzz and scutter. The rounded beats and waves of melody pace the listener as the vocals sit low in the mix, as much instrumentation as a lyrical piece. It drifts out and the world indi has created fades from view, a dream melting as the dreamer wakes.

As a debut collection Precipice is assured and wide-ranging. A beautiful and unconventional album to give yourself fully, a soundscape illuminated further by each repeated listen from an artist who has real potential to develop into creative treasure.