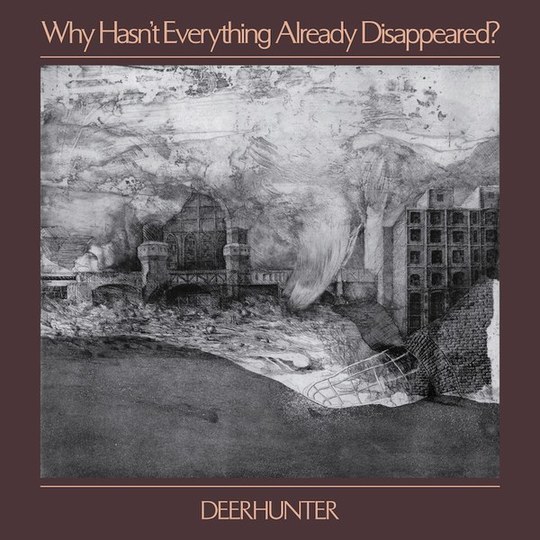 While it’s difficult to look at the works of Deerhunter and say with conviction that they ever had a commercial phase, I think it’s at least accurate to say that eighth outing Why Hasn’t Everything Disappeared Already? sees the band a long way away from the ambient punk sound that made their name.

It’s a clutch of odd songs, made odder by the circumstances and symbolism that have been layered on them. Aside from the striking name and the written commentary (more of which later), the band retreated to the obscure, deserted Texan desert city of Marfa – alongside a series of co-producers including Cate le Bon and Ben H Allen – and created a record both oblique and accessible. It’s discernibly made by the band that made Microcastle, but uses an almost completely different palette.

The funny thing is that Deerhunter have to turn it to down to make a leftfield turn as they‘ve already done the whole abrasive thing: their idea of a wilful move to the left involves the stop-start harpsichord arpeggios of opener ‘Death in Midsummer’, the verdant forests of bucolic acoustics on ‘No One’s Sleeping’ and ‘Nocturne’, the lush, early Simple Minds electronica of ‘Greenpoint Gothic’ and ‘Détournement’.

Its strangeness is all-pervasive, yet understated. It‘s Deerhunter’s quietest record to date, and not exactly lacking in hooks – ’Element’ and ‘Plains’ are earworm-ish, descended from the pop of another generation. And yet everything’s ineffably odd – the instrumentation is pointedly off your expectations, sometimes like old Deerhunter transposed into a more organic language, sometimes like nothing they’ve ever done before. Though it feels concerned with the decline of the West, it doesn’t so much have thunderous Armageddon vibes as the sense of a great slowing down or imminent stillness.

Cox’s lyrics are as impressionistic as ever but perhaps the record’s most aesthetically distinct component is the written commentary applied to each song on the sleeve. Mostly, it’s brief pointers: the second-side-of-Low-alike ‘Tarnung’ (Lockett Pundt’s sole lead vocal) comes with the legend ‘a walk through Europe in the rain’; ‘Greenpoint Gothic’ is ‘an architectural interlude for synthesizer and drums’. The lush pop of ‘Plains’, with its chorus of “oh James, you’ve got no reason to stay in these plains” is (presumably) elucidated via the note ‘James Dean spent the Summer of 1955 in Marfa, Texas filming "Giant" before his death on September 30th.’

The one that really flips the meaning is ‘No One’s Sleeping’; the lyrics would appear to describe a small village, oddly busy at night, but the description (apparently) turns it into Deerhunter’s most politicised work to date:

'On 16 June, 2016 Labor Party MP Helen Joanne Cox died after being shot and stabbed multiple times in Birstall by Thomas Mair, a mentally ill man with ties to a Neo-Nazi organization. He shouted “Britain first” as he carried out the attack.'

Is the song about her? Is the village described Birstall? Or is it an oblique comment on the febrile international mood that led to the killing? It’s perhaps distasteful to speculate excessively, but certainly the words add something profoundly emotional to the defiant instrumental chiming of the song’s final 90 seconds, a pealing eulogy, luminous and brave.

It’s possibly worth noting that the album is also accompanied by an almost incomprehensible series of bullet points from Cox that say things like ‘Vampire Salon of human dignity, compete then we relax in glass’, so who knows how seriously you should take any of the commentary. But it all adds to the the album’s allure – a singular thing, not quite of this world, desert fruit ripening quietly on the eve of the end.