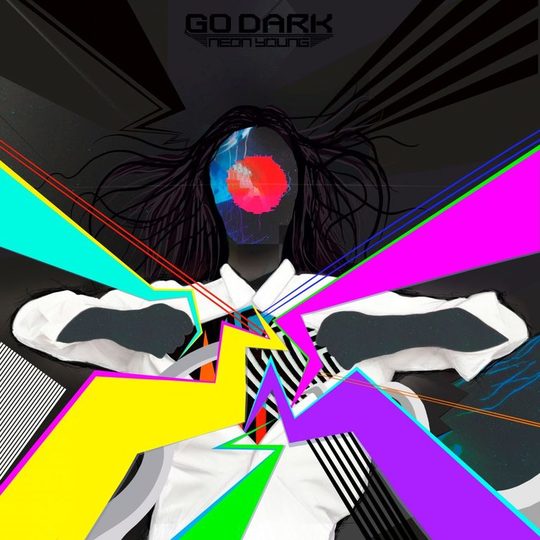 On paper, the concept of prismatic duo Go Dark sounds like the cyberpunk rebellion we need for these fractured times. It’s a timeless story, really: the displaced youth (played by Ashley ‘Crash’ Gallegos) finds a new calling among the art circles of Chicago and Oakland, while a veteran outsider (played by Adam ‘Doseone’ Drucker) finds an explosive new talent to collab with. And to be fair, Neon Young gathers tons of noble ideas together, bumping pop into hyperdrive to keep up with the entrenched misogyny of America. But as much as our heroes strive to pound messages in our ears, the actual impact gets garbled in the shuffle; for all her energy, Crash barely scrapes out of her own skirmishes.

It’s bizarre, really. The moment that you first plug into ‘The Blade’ feels like sensory overload, even if you could spot Doseone’s helter-skelter beats from a mile away. Yet, by the time we reach ‘Numb’, the frantic ping-pong of one song’s three hooks begins to blur with the table tennis of another song. Moments stand out before actual melodies, like the momentum behind the vow “I am murderous”, or the point when Doseone growls “and they like ‘em dumb in response to Crash’s all-too-true refrain “the world loves a beautiful bitch”.

What’s worse, Crash sounds rather squashed between the digital calamity. I’m reminded of how much Gang Gang Dance’s Lizzi Bougatsos pulled back her own reins on last year’s Kazuashita, and how much that disappointed me. But that was a deliberate reel-back; and when I revisit Gang Gang’s world, I realise that Bougatsos wore that blush well. But back in Neon Young, the cinematic, almost Young Fathers-ish ode ‘Big Rot’ calls for indignation that Crash just doesn’t rise up to til the end. “For you I will rot,” she chants, miming a woman still bound to men’s desires; you can hear the spite she intended to spit in, but only in a MIDI-dry form.

Still, Crash and Dose at least have their hearts set in the right place. Indeed, their most cohesive song is also the most noble of the bunch – ‘El Barrio’, a moody ballad with an ounce of dignified soul (a la Algiers, anyway), speaks to the criminalized minorities that cycle in and out of prison. The actual ambient sirens promised in the presser turn up rather tastefully here – after all, for pretty much anyone living in or near a non-white neighborhood, police sirens are just part of the daily noise.

Alas, while Neon Young rattles with more justifiable rage than many punk bands could even begin to articulate, some crucial spark still feels absent. In my head, I try to imagine what would happen if ‘The Blade’ – Go Dark’s most obvious attempts at a swaggering pop anthem – suddenly popped up after Pharrell’s ‘Happiness’ or Bruno Mars’ ‘24K Magic’ in a crowded room. Maybe a few curious minds would hear Crash cry "There’s no wild in you" over the din and wonder what stifled their primitive side. But me, I still wonder if that coded call-to-action would be enough to tip the audiophile’s attention away from the big stars in the status quo to the aforementioned rebellion in the streets.