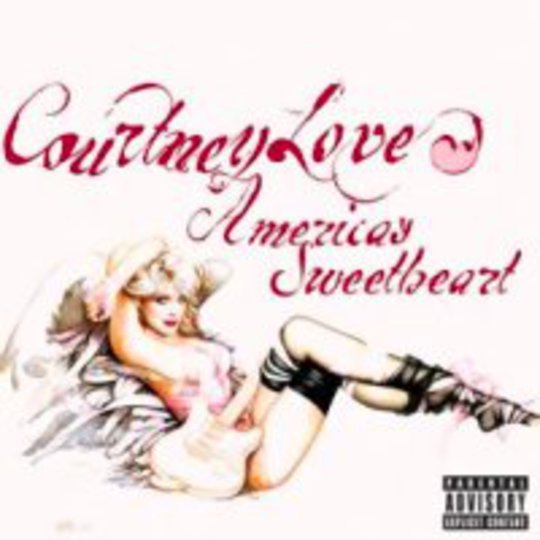 Screw the anticipation; Courtney is back on the stereo and she stole your converse sweating boyfriend and made him realise who was queen. It's over, deal with it. The darling of said masturbatory sub pop-screwing teen has made the record she's promised since we were wet and obsessed with 'Live Through This'. Her talk says Zeppelin sinking Abba covers and her walk delivers even more. She's sliding down the Sunset Strip with pop nous strangling choir-tainted punk rock.

'Mono' is just the beginning; the angry yell before she gets even. 'America's Sweetheart' is the confession of a woman gone mad, gone Les Paul shopping and gone hunting for celebrity endorsing songwriters. Her honesty's still apparent since she was last seen, having her parts waxed in print and humping donald duck ('I've got pills for my coochie coz I'm sore'). She's still a Pamela Des Barres novel wrapped up in a life of Jackie O black tie dinners. While her peers were growing tired of a lifetime of overdoses and plaid, she found the next generation of Ramones schtick beating punks, shagged them with the Bono talk and taught them the words to 'Sheena Is A Punk Rocker'.

'America's Sweetheart''s polished tone perfectly complements her own scraggy zeitgeist; the Linda Perry pop sheen comfortably sits next to the dirty hooker feuding rock pomp. 'Sunset Strip' throws up the catchiest refrain Courtney's ever sung ('Oh, Rock Star Pop Star, Everybody Dies') and swallows the 70s tourbus skank of 'All The Drugs' in a world where Marilyn Manson learnt from 'Exile On Main Street' era Stones rather than Annie Lennox and The Eurythmics.

She can write a four beat love song to piss on The Knack ('Uncool') and she can still recite the 'Pretty On The Inside' songbook.

And she still knows how to use the 'Teen Spirit' hook to piss off the Smashing Pumpkin fans.

But 'America's Sweetheart' is still more 'Celebrity Skin' than anything; it's still Hole setting out to live in a world complete with Michael Stipe mainstream credibility and homosexual xanex parties.

The 45 minutes of vinyl deserving Courtney loving ends like the movie made to accompany her dirrty death disco existence; a lemonhead trashing ballad of 'Doll Parts' proportion.