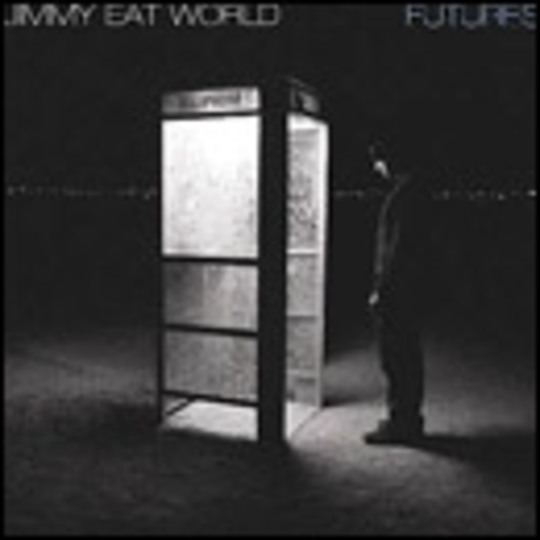 So. You made it to the top of the world. And what do you do now? Well, if you're Arizona's favourite rock band, then you explain to everyone that, 'hey, it's actually not that great up here and it was very hard getting here, and now that we are, we have no idea to do and it's burning a great big hole in my SOUL, goddammit!'

And that is the Jimmy way. And as they reach the peak of their emo world (a phrase rendered completely acceptable and relevant in the mainstream as a result of it's recent appearance in The OC [yes, of course Seth is an emo geek. Well, duh.]), there's no reason to change the content matter, just say it a little differently. A little nicer. Because this indeed is the beginning stages of what will be know as E-MoR, a strange brand of catchy lite-rock that sings of love and takes over the airwaves. Sound feasible? Nah?

Ergo, the eponymously-titled opening track sounds like 'A Praise Chorus' with a big ol' cardigan wrapped around it, and 'Work' sounds like a thrash pop belter slowed down by a third, complete with giant chorus and typical chasm-like sonic dips. First single 'Pain' (pretty much the most frenetic thing on this record) also sounds like it's had its teeth filed for easy consumption. But? what's wrong with any of that? Assuming that they can't afford $40,000 a month therapists to keep their anger management in place, it's going to have to be self-administered medication. And indeed* Jimmy Eat World* show signs of growing gracefully. Take for example the gentle strings and ringing harmonies of 'Kill' and 'The World You Love'; they're still pretty rockin' tunes, but they show a sense of awareness; a realisation that you can go on, but frankly, still being a member of Greenday as you tip towards forty means that you're a c**t.

Still, there are surprises, like the six and a half minute 'mo epic of '_Drugs Or Me', which may well one day become the 'November Rain_' of the double-strap backpack generation. To such lofty ambitions do JEW aspire, and that's a credit to them. No Axls in there either, thankfully.

It's not going to break the mould, it's not too radical, but then, JEW never were. What it might possibly do is explode them into the mainstream, whilst clinging onto their old fans, because 'Futures' is an inviting, maturing album that still shows enough vitality to still be classed as a good rock album. .