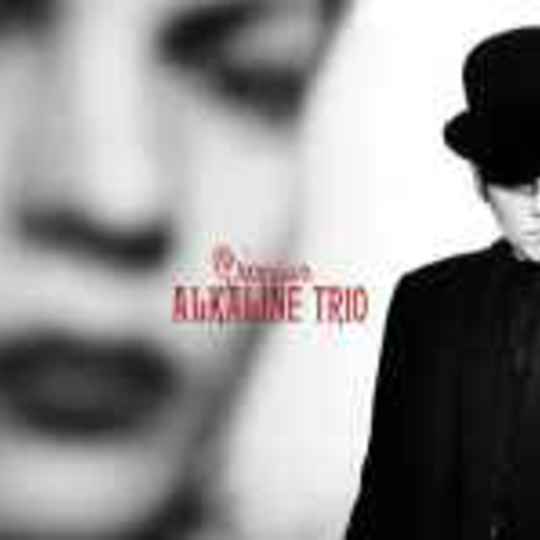 The* Alkaline Trio are in a happy place; not of course emotionally – theirs is a continued world of non-more black nihilistic wilderness – but y’know, professionally. By a mile the best band currently operating in their sphere, the trio, based around leader *Matt Skiba, delivered their career best album in 2003’s Good Mourning’ and now with ‘Crimson’ have created their most well-rounded LP so far.

‘Crimson’ still operates in a world of broken bones, alcoholic breakdowns and life-long sickness. Gradually though, it’s the music that is slowly metamorphosing. In come a more pronounced use of keyboards (check out the opening minor key piano lament to opener Time To Waste’), filters, faders and studio trickery. It’s not bludgeoning or an overtly radical change in direction, but it’s enough to imply that the band are still growing, learning and striving for that melodic perfection that all good punk bands retain. Key example would be ‘Burn’, which marries a near-industrial grind to the now-expected classic chorus (“Intending to burn, pretending to fight it / Everyone learns faster on fire”) and tops it off with a piano breakdown… ‘I Was A Prayer’ repeats the same trick, introducing epic, sweeping strings.

Of course, there’s straight, straight-ahead pop thrills in the likes of ‘Mercy Me’, 'Your Neck' and ‘Dethbed’ – who’s lyrics descend to a whole new level of bleak: “Falling like stars into the ocean black, we're gonna disappear / And anything left recognizable is swept away with fear”. A new level that is, until we hit album centrepoint Sadie’ a tale of psychosis and institutionalism. Set on sweeping Cure-esque synths, the song relates the story of Sadie Glutz aka Susan Atkins** of the Manson Family. Chillingly it ends with a reading of Susan Atkin’s statement: "I think that if I found a god to me that was so beautiful that I'd do anything for him. I'd do anything for god. Even murder, if I believed it was god, how could it not be right? Because he said it was. I have no remorse for the killer inside of me, I have no guilt in me". Nice.

..which is why A3 seem to have that near-timeless pull when other bands come and go, briefly flicker bathed in MTV light and then just as quickly disappear. It’s punk pop pulled towards an adult world, given a macabre make over that manages to avoid the singular silliness of the likes of AFI and dunked in a vat of sugary sweet pop brilliance. Fortunately for us, there is no end in sight, as Skiba promises on ‘I Was A Prayer’, “I spit out words 'til you see my lungs on the dancefloor”. Thank heaven for that.