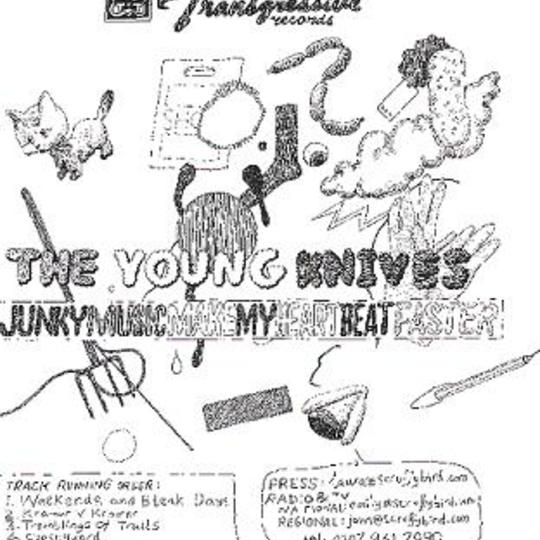 The Young Knives told DiS recently of their hatred for “boring office jobs with big firms”. These desires of escapism are so vivid when playing ‘Junky Music…’ that the band are almost clawing their way out of the speakers. This urgency gives the group an ability to reach out to the listener, and give you a big enough shake to make Louise Woodward blush.

The EP, the title of which is potentially a misheard suggestion for the new Babyshambles album, contains an unashamed set of bristling pop songs. Vocalist Henry Dartnell has a child-like view of the world and some wonderfully inspired lyrics - “A mug of tea, a cup of sake, a Virgin Mary with her marquee...” - with tracks bouncing excitedly between delight, despair and the downright strange without ever losing the ability to get the blood pumping as the EP promises.

Short of covering ‘I Want To Break Free’, the Oxford based three-piece couldn’t have made it clearer that they are set on moving onwards and upwards, from ‘Kramer Vs Kramer’’s chorus pleading of “No more time”, to ‘Trembling of Trails’ repeatedly warning of “a ticket for anywhere”. However, the band are at their best on the none-more-jerky ‘Weekends And Bleak Days’, which is so unbelievably smile inducing that it makes running out of the office to sing the song in street not merely a passing thought but an order, dammit.

Stuffed with English eccentricness and humour, the production from Gang Of Four’s Andy Gill has managed to capture the band at their best and see them take the crucial jump from potentially great to being fucking brilliant. Time may seem like it’s running out, but records this great automatically achieve a timeless quality. Don’t give up the real day job, boys.