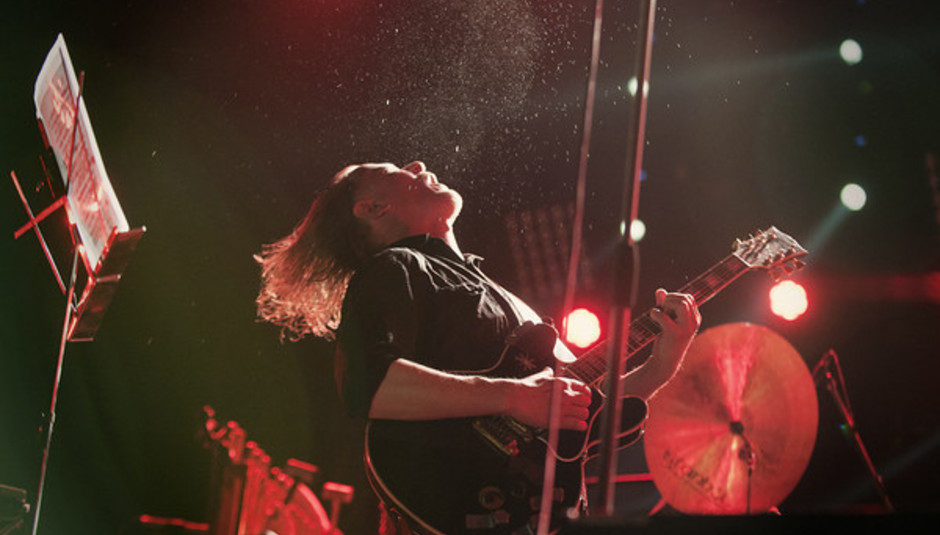 Off Festival, like its host city of Katowice, is a festival of eccentricities. Outside the grounds scaffolding coats buildings that look centuries old, and further out gargantuan industrial monstrosities punctuate a pristine deep-green forest. In the shadow of the imposing Katowice coal mine Off has grown into one of the best mid-sized festivals in Europe, with 2012's edition being perhaps its strongest yet.

There are so many things about Off that appear bizarre at first but in the end make sense. Foremost is the prohibition of the consumption of alcoholic beverages outside of a fenced-off allocated drinking area; after initially seeming a hindrance its benefits are obvious, with litter kept to a minimum and those who see the weekend as a race to oblivion neatly herded in one place instead of charging between stages. That only one lager (Dutch) and no spirits are available in the home of the best choice of beer and vodka in the world seems sacrilege, but it keeps queues down and choices simple.

Besides, there are plenty other things to distract yourself with, and whilst the festival may have excommunicated itself from the suds of its homeland it still maintains strong ties with its culture. Various record labels hold stalls, as do local catering firms offering anything from local specialities (chiefly the groin-grabbingly transcendent Golonka, a boiled and lightly salted pork ankle) to pan-Asian cuisine. In keeping with this, Polish bands open each day's proceedings, the highlights of which being the hyperactive Band Of Endless Noise and a brutal one-time collaboration between Blindead & Tides From Nebula, which fuses the schematics of latter-day ISIS to blasts of industrial metal entirely in fitting with the Silesian landscape. Sure, there is some flack, but the curators should be applauded for the depth and breadth of the local talent on offer, and the same can be said for the international roster, too.

Canadian alto-saxophonist Colin Stetson is the first to take the flag on Friday, the audience for his early performance on the indoor Scena Eksperymentalna buoyed in number due to the deluge outside, which fortunately lasts only for the first day of the festival. In a packed tent more closely resembling a greenhouse his set can seem like an endurance test, with barely a pause for breath in just under an hour, but there is something utterly mesmeric about the cyclic snake-charming melodies that slowly build into a maelstrom matching the weather. His reception is somewhere between respectful and rapturous, which leaves the greeting given to Converge all the more baffling. Barely a couple hundred rush to the front for their performance on the smaller outdoor stage, and any attempts at forming mosh or circle-pits die down within seconds. The band themselves are faultless, launching into tracks such as 'Jane Doe' with typical gusto, but faced with such indifference their violent pirouettes seem little more than petulant.

This is a blip, however, and back at the Experimental Stage (that's English for Scena Eksperymentalna) Josh T Pearson is treated with the adulation he deserves and usually receives. His mourning acoustic meanderings still stick out like a sore thumb in most line-ups, and he readily admits on stage he is not appropriate festival fodder, but the yearning country of 'Country Dumb' and 'Woman, When I've Raised Hell' contain within a transporting quality, and for sixty minutes it doesn't really matter where you are.

It's at this point that the festival's scheduling comes into its own. With four stages set out in an L shape and only two running at a single time there are very few clashes for a weekend with such a packed line-up, meaning it is entirely possible to see the budding electronic soundscapes of Alva Noto and Death In Vegas, settle down with Josh, King Creosote and Mazzy Star and then wonder whether you REALLY should enjoy Atari Teenage Riot in a six-hour time period with virtually no over-lap, and if that isn't enough top things off with the under-stated techno of Andy Stott.

Saturday's line-up is slightly more sparse, but with the thermometer pushing 30 it is no great complaint. A later start also gives the opportunity for sight-seeing, or a few pre-festival drinks in the city centre. Many festival goers and artists alike share the same hotel, with Thurston Moore (espresso – Milano style) and Spectrum (vodka – straight) propping up the bar before ear-splittingly loud sets later on in the day. Although undocumented there must be an anti-aging by-product in the creation of white noise, as both look and sound as vital as ever either side of the big 50 mark.

Elsewhere Other Lives make the second stage their own. Whilst some of their material verges closely to the tired Fleet Foxes formula of gang vocals and windswept America the Oklahoma quintet are on the whole an entirely different beast. They feel like a band that are on the cusp of creating something special; there is a band within them that their PR may prefer to not be unleashed. One can only hope that, as they do on the brooding 'As I Lay My Head Down', they choose the road less travelled.

The stage, slightly breaching the coniferous forest that lines half of the ad-hoc site, is the perfect venue for them, and the same is true for The Antlers. Where once they were introspective now they soar, and 'Drift Drive' and selections from Burst Apart sound absolutely momentous on the Scena Lesna. Like My Morning Jacket or even Mew their cocooning process has lost them some fans, but live there is no argument that theirs has been a genuine progression rather than an amplification of lesser ideas. Reworkings of 'Atrophy' and 'Two' do at times feel slightly flat, with a suggestion that they are possibly thrown in merely as an obligation to the Hospice obsessives perhaps not too far wide of the mark.

At a complete right angle to the majority of the weekends' bill, headliners Iggy & The Stooges nonetheless make their presence known with the pomp and power you would expect. Just after midnight their set is a shot in the arm for the festival, with the serenity of the last couple of hours pulverised by their primordial mix of garage and gutter-punk. Iggy Pop, ever the showman, is a one-man highlight reel, and as intensely animated as you could have ever imagined him being. Yes, some songs grab the attention more than others, 'Kill City' and 'No Fun' for example, but there is only one centrepiece. The spotlight, eternally, is on Iggy.

Despite a tail-end of the night before that saw sets from Spectrum and High Places drift into an alcoholic haze, the final day of the festival is no time for respite. Fanfarlo kick things off early on the second stage, with a blend of acoustics and histrionics that, whilst obviously expertly crafted and delivered with confidence, often flutter by, particularly in such an expanse. The Ty Sygall Band fare better in the sauna-like Scena Trojki, all howled vocals and lo-fi, high-octane riffs. Drawing from the wealth of his own back catalogue along with selections from the band's recent début full-length, there is an obvious debt to Iggy and his ilk, but also nods to early-seventies heavy metal and late-sixties psychedelica, an irresistible blend for festival pogoing if ever there was one.

Later, Baxter Dury is one of the weekend's lowlights. Some credit must be given for saying goodbye to the crowd and then launching into a town minute jam complete with a drum solo, but his heavily accented and perma-uninterested vocals are are extremely grating. Which is not to say that heavily accented vocals should be avoided; The Twilight Sad prove the opposite. The Glaswegian five-piece have negotiated a tricky period around the implementation of two new members into their set-up to become, yet again, one of Britain's best live bands. The guitar-based walls of noise are no longer the be-all and end-all, with synths and programmed drums given more prominence and breathing room given when needed, but the intensity is still there, and vocalist James Graham's attack becomes more ferocious with every passing show. From the squalls of feedback that cloister early favourite 'And She Will Darken The Memory' to the brooding basslines of 'Kill It In The Morning' they are an embodiment of pure adrenaline in a collapsing landscape of suspense and ennui.

Typically, theirs would be the most foreboding performance of the weekend. However that is without reckoning for the closers in spirit; Swans. Michael Gira's dead-eyed sextet have shifted dramatically from the harsh post-punk of their first forays into something much more sonically rich and diverse, still delivered at the same ear-splitting volume. Much of the set is taken from upcoming full-length The Seer, which sees the band settle at some cavournous mid-point between Americana and doom and is driven not just by Gira's contrasting deliverance of rabid screams and despondent, at times sultry, bellows but equally by the shattering riffs of Norman Westerberg and the inventive percussion of Thor Harris, who stand alongside any drummer you could care to mention in terms of technique and invention. 'Lunacy' and all thirty minutes of the album's title track are wrought with a visceral energy that is unparalleled, tribal and often terrifying. As the band push the two hour mark, well past their alloted time, a soundman attempts to begin unplugging monitors. Gira throws down his guitar and promptly forces him off-stage; Swans are not a band you want to fuck with.

There is more to come; namely the post-everything doom-cabaret of Chrome Hoof and the glistening glitches of Fennesz, but Swans, with a sound fit for the end of the universe, are the most appropriate book-end. As the sun begins to rise again it is time to say goodbye to a weekend of unrivalled pleasures. Once again Off Festival has proven itself to be the highest point of origin between the axes of cost, size and line-up, eccentricities and all.

Away Game festival: the DiS review

Drowned in the North East #3