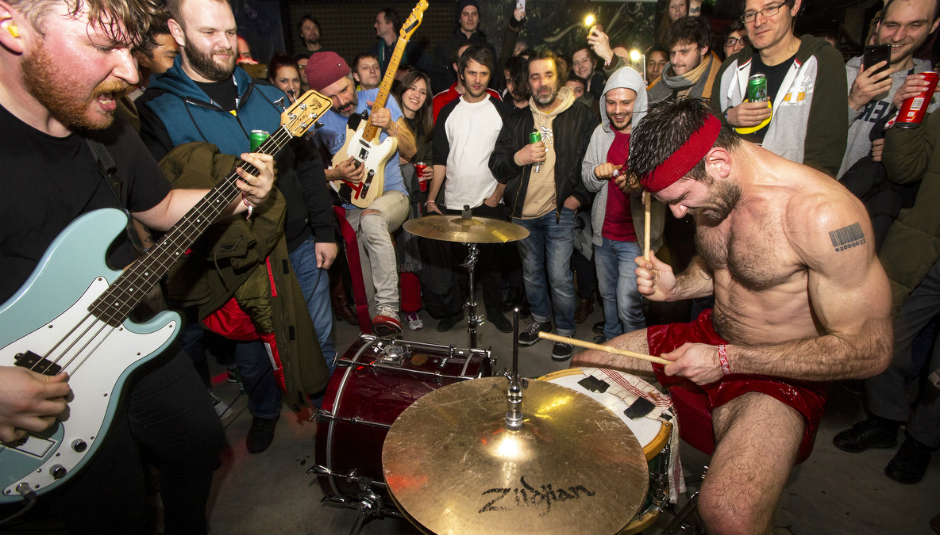 Watching Iceage strut and whirl through their pummeling, raw pop-punk on the opening night of MENT festival brings to mind two thoughts. Amid the nerves and hopes of artists just starting out, desperate to be noticed, it’s instructive to watch a band four records and hundreds of shows deep, locked in tight to their grooves and riffs. There’s barely a glance between them as singer Elias Bender Rønnenfelt spins and teeters across the edge of the stage while Johan Surrballe Weith wrestles with his guitar; the quartet are a study in controlled aggression and channeled power, the slow burn of their newer material occasionally booted aside by blasts from their past. 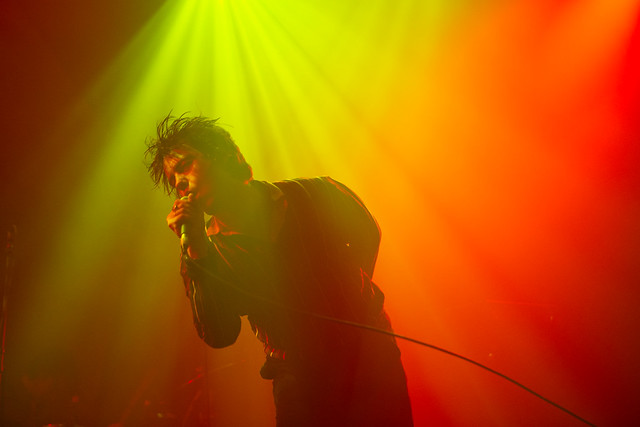 It serves as a marker of sorts, a gauntlet to the hopeful; this is how good you have to be. But it’s also the culmination of a rise that doesn’t seem probably these days; four European teenagers plucked from obscurity by Pitchfork and The New Yorker, hailed as saviours and thrust into the limelight. Could a foreign band ever breakthrough like that again? Iceage’s debut came out in 2011, yet it already seems like a different era; it’s hard to imagine something similar happening to any of the artists performing here (or at any of Europe’s other prominent showcase festivals).

What can a band hope for in 2019 then? Much of the conference part of MENT is dedicated to answering this. There are workshops about syncs, speed dating with various agents and festivals, and an hour in which to discover the ‘5 Things Everyone Should Know About Streaming’. You can also learn about touring China and, provided you’re not press, peek under the hood of Spotify – their two sessions are strictly for labels, artists, and managers only.

A lot of it is (rightly) focused on the graft required these days, how – if you wish to be a full-time musician – no avenue for income, fans, or exposure can be left unexplored. Then there are the actual shows, a chance to shine in front of bookers, the international media, curious local fans, and a great many others involved in the industry one way or another. As eclectic and diverse as ever, the range of genres on display run from glitchy techno to hardcore punk via “geisha pop” and avant-garde jazz accordion; only a few bands disappoint.

An early stand out is Ptakh_Jung, a Ukrainian duo who craft a dark, heady mix of post-rock, electronica, and ambient soundscapes. They’re accompanied by live visuals from VJ artist VJ Reinish, all very cinematic and dystopian, and fill the Cinematheque with great swirls of noise. There’s a similar undercurrent of tension and angst to Slumberland’s musical recycling and experimentation – discarded sewing machines, knitting needles, old hairdryers, and other antique paraphernalia are combined with his sinister baritone and raw guitar to create something visceral and otherworldly. Two live drummers add an anchor to the clatter, even though it’s not entirely clear at times why one was insufficient. 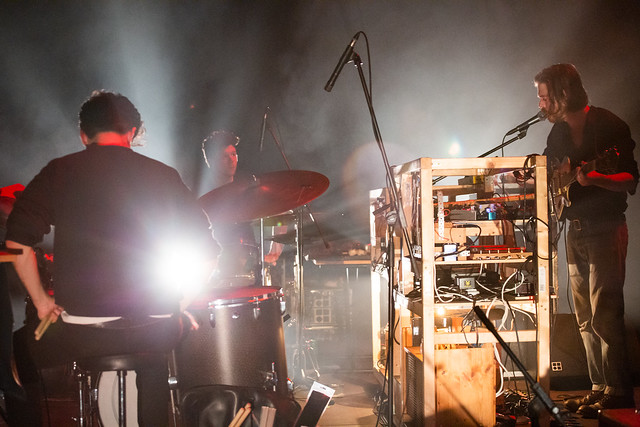 In the UK, the conveyor belt that shuttles bedroom producers, solo pop stars, and Brit School graduates to major label deals, mainstream radio, and daring cover shoots is running as efficiently as ever, but it’s noticeable at continental events how prevalent bands still are. Guitar music is dead? Try telling that to Belgian punks It It Anita, a band who’ve been around a few years now and whose habit of climbing into the audience has yet to lose any of its thrill. During one song, guitarist Damien Arresta hands his instruments to a fan down the front and instructs him to play along; for last tune ‘G Round’, drummer Bryan Hayart – wearing only a bandana, nylon shorts, and copious amounts of sweat – sets up his kit in the middle of the crowd and pounds what’s left of it into submission. 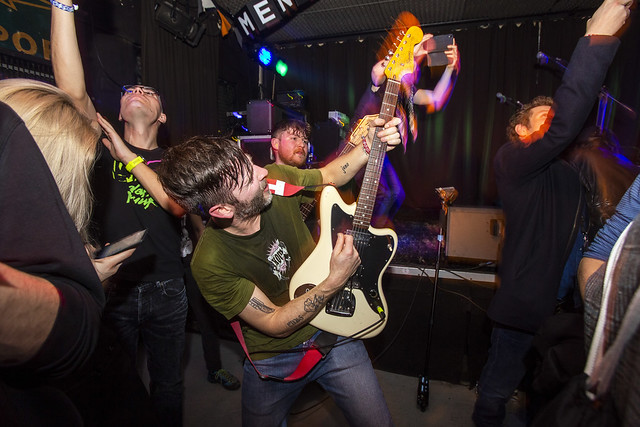 Then there’s the ferocious, unhinged punk din of Charlie & The Lesbians, a favourite of ours and purveyors of one of the most manic live shows anywhere. Down the front, it’s hot, sweaty and confrontational: A colleague ends up dancing on my shoulders; we barely survive the moshpit intact. A lot of their lyrics may be “really dark and about death”, but there’s something joyously life-affirming about throwing yourself around as their mad racket blasts you in the face. If you get the chance to see them in the flesh, go – you won’t be disappointed. 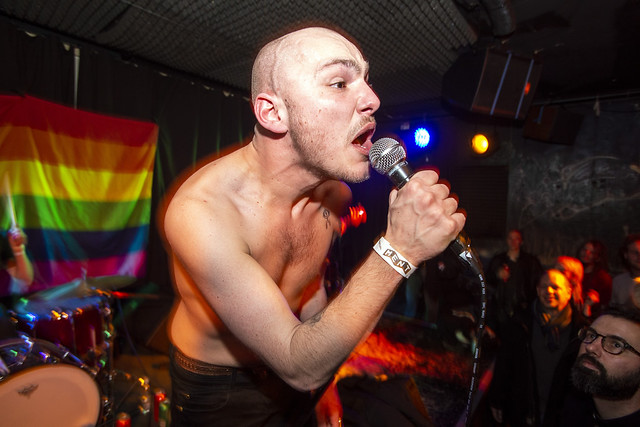 Plenty of other bands impress too. Tents, an Austrian three-piece, swirl a melodic mix of post-punk and indie rock into something catchy you can imagine having major crossover appeal, while French quartet Rendez-Vous are what you get when you mix Interpol with Skying-era The Horrors and a healthy dose of Gallic insouciance. Squid are even better; their rousing, post-punk rush is carried on waves of psychedelia and krautrock, intense, weird songs that scan like David Byrne conducting LCD Soundsystem. 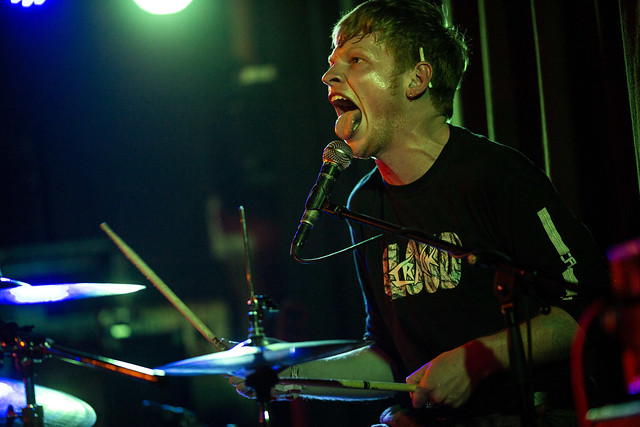 Yet the week’s most potent, standout thirty minutes comes from an unlikely source. By any standard, Goran Uroić is not a pop star – he’s more like a cuddly, middle-aged insurance salesman, a Croatian Ned Ryerson – and yet here he is as ManMachine, in an ill-fitting jacket and bowtie, singing his heart out to a Roland XP50 in front of barely thirty people. It’s compelling, fun, and utterly magnificent. “Like Sleaford Mods fronting Bronski Beat,” says a colleague, as apt a description as any for his dark, brooding synth-wave and 80s pop stylings.

“It’s fucked up!” he screams over and over during the coda of ‘Shelf Life’, a glittering, bittersweet ode to losing a lover that sounds like a man tumbling over the edge of sanity. He follows that with the most brutal, no-wave Leonard Cohen cover you’re likely to hear, turning ‘First We Take Manhattan’ into a savage monstrosity. “Sorry, I’m losing my voice,” he says as everyone chants for one more song before relenting, and fighting through the croak. 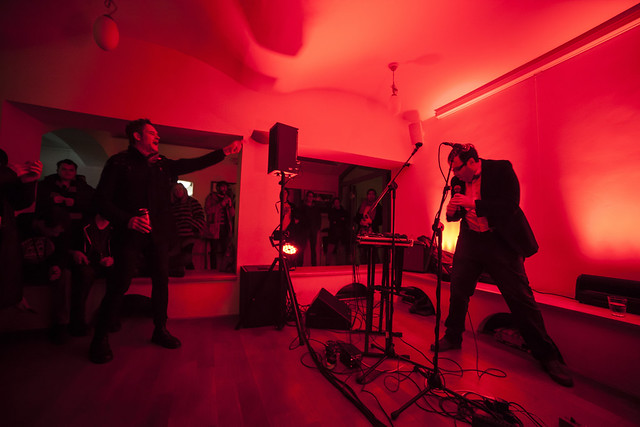 Seriously, go listen to this. Buy it. Play it to your friends. It shouldn’t work but it does, on so many levels. Of course, ManMachine won’t be the next breakout star or Best New Music – I’m not even sure he earns a living from music – but for a glorious half hour, Uroić sounds like he’s ready to conquer the world.

Who could emulate Iceage then? Step forward Dutch quartet Lewsberg, a band who impressed two weeks ago at Eurosonic and are even better here. The deadpan, sardonic delivery and catchy chug of Arie van Vliet & co. have earned comparisons to the likes of the Velvet Underground, Television, and The Modern Lovers – exalted company, for sure, but one the music more than deserves.

Their self-titled debut album is being re-released this month, on Cargo Records, and the follow-up, so I’m told, is already in the can too. Lewsberg have the chops – and the smarts – to be more than a fleeting favourite, and if there’s any justice they’ll be back here in a few years, on opening night, showing all the pretenders how it’s done.

MENT takes place in Ljubljana at the end of January. For more information, including 2020 dates, please visit the festival’s official website.

All other photos: Credit as indicated

The Fangasm: My Beautiful Dark Twiste...

"This is the most immediate album we'...