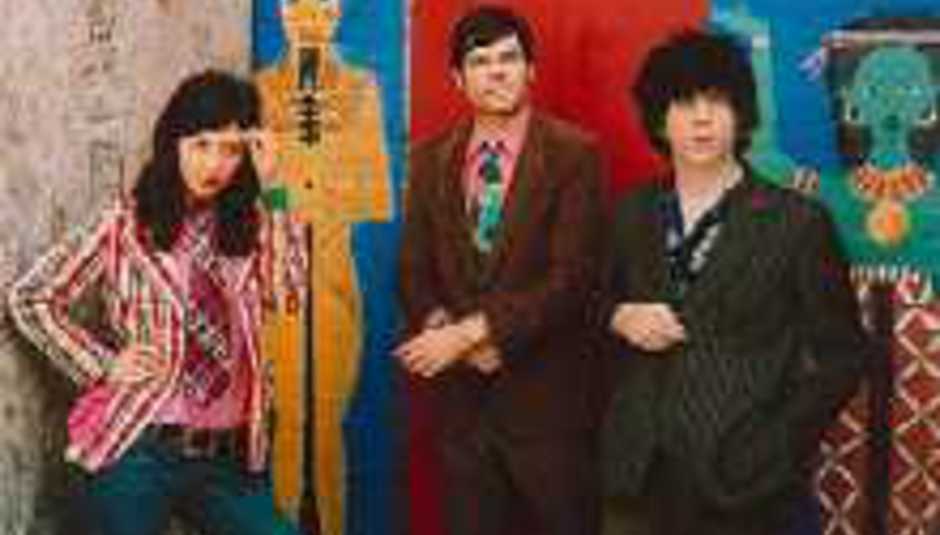 Not Going to Mars

Not Going to Mars

by holliy March 21st, 2004
With three albums out, a new EP on the way and a UK tour approaching, the time seemed right to ask Weird War (of ex-Nation of Ulysses/Make-Up fame) a few questions about what we can expect when they invade our shores. So DiS e-mailed them a questionnaire, the response to which sees Weird War asking themselves almost as many questions as DiS did and being as determinedly cryptic in interview as they are in their lyrics and sleeve notes.

So, Weird War - who's involved?
Rumour: "Weird War is the the outcome of a magick spell; eye of newt, wing of bat and menstrual blood buried under a rock on a full moon".
TRUTH: Weird War is comprised of Alex Minoff on Electric Guitar, Michelle Mae on Electric Bass Guitar, and Ian Svenonius on Vocals. Being an umbrella organization, Weird War sometimes includes other guests of distinction.

Was the journey from Nation of Ulysses through the Make Up to Weird War a natural progression? Or does each one represent a starting over from scratch?
Rumour: "Weird War are absolutely irrational and nothing has been predetermined from day to day".
FACT: Though irrational, Weird War have charted out their development over time with graphs and with help from former Soviet planners. Their desire: to create a musical narrative which leads the culture's leaders to their own destruction. They make their music according to the inspirations they encounter and sometimes fashion it in reaction to trends they find disheartening.

Why the name change from Scene Creamers to Weird War?
Rumour: "The name change was precipitated by a threatened legal suit by French graffiti artists".
TRUTH: Weird War cannot comment on this matter publicly right now.

How does Weird War #1 fit into the picture?
Rumour: "Each Weird War (AKA Scene Creamers) record is different from the other."
TRUTH: Yes! This is true.

What can Weird War offer the listener which they can't get from any other band?
Rumour: "Weird War is the sole answer to the hype based careerism, empty formalism and vacuity which has infected what was once a genuinely creative underground rock n roll scene". TRUTH: as above.

You've always used music as a platform and loaded it with politics - how great an effect do you think music can have on people's opinions? Why choose music as a medium rather than any other artform?
Rumour: "Weird War see music as a way to disseminate politics". TRUTH: Weird War are concerned with making music, and with the celebration of the irrational and illogic and the insinuated destruction of the existing order, musical and otherwise. Does Weird War see the clone nature of the revisionist groups as a direct analogue to the fascism and conformity which defines 21st century America?
-The answer is 'yes'.
And their general idiocy an infiltration conspiracy by counterintelligence forces?
-Well, of course they do!
Does Weird War recognize 'culture' as a potent ideological tool, as with the dissemination of pro-US army hollywood movies across the globe?
-Yes.
Does Weird War recognize their place and their responsibility in this context?
-Again the answer is 'yes'.

Where do you stand on the war in Iraq? Britain's seen a spate of anti-war gigs and benefit records - has anything of that sort sprung out of the war and into the music scene in America(except from the Dixie Chicks, of course)?
Rumour: "Weird War has included a song, called 'AK-47' on their new record, IF YOU CAN'T BEAT 'EM, BITE 'EM which could be called a celebration of nationalist resistance movements worldwide which fight Anglo-American imperialism"
TRUTH: Yes, the song 'AK-47' addresses the technology gap which faces modern Anti-colonial guerilla fighters.

What do you aim to put into Weird War live shows to make it something you can't get from the records?
Rumour: "Live gigs are the same as listening to a record".
TRUTH: This rumour is untrue; the two experiences are different.

How important is image and artwork to you?
Rumour: "The pure experience of a group is only sound, and without images or performance"
TRUTH: No! A group is the sum of its parts really; the separation of sound and sight is an invention of recording technology.

And finally, how can people get hold of further info and, more importantly, your music?
Rumour: "Weird War can be contacted, and their records (Scene Creamers/Weird War) obtained, through Drag City Records".
TRUTH: Yes; Drag City Records is Weird War's commercial conduit.