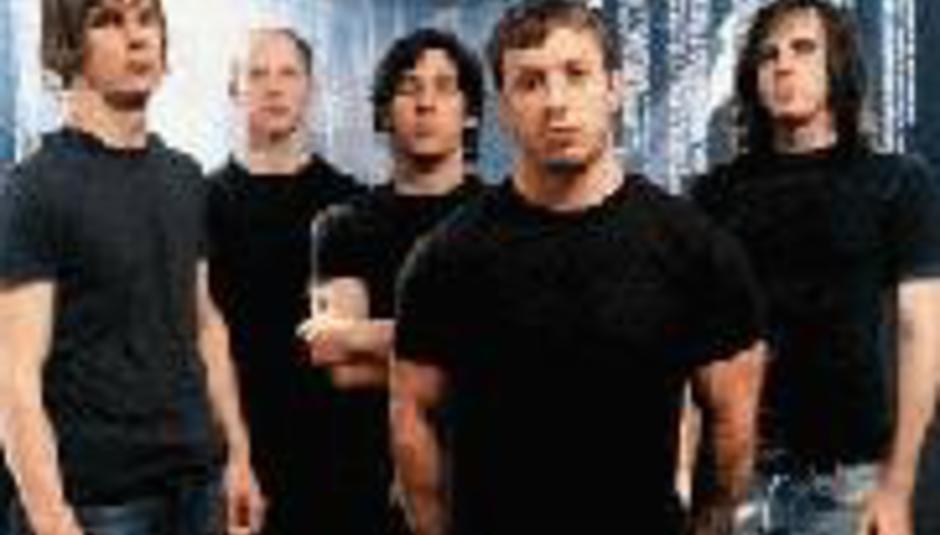 by Mat Hocking July 15th, 2004
Credited with increasing the amount of technicality seeping into the hardcore movement by, ooh, about 300 per cent, The Dillinger Escape Plan’s uncompromising approach to heavy music has seen them become unofficial figureheads for the entire math-metal scene. To say their forthcoming album 'Miss Machine' – their first since 1999's 'Calculating Infinity' – is highly anticipated would be a gross understatement. Reports of grown men foaming at the mouth upon listens to advance MP3s are coming in at around 12 an hour, sometimes more. So, following their appearance at Download Festival last month DiS caught up with guitarist Ben backstage to find out what we can all expect.

DiS: So Ben, you’ve just played Donington. Does it hold any special meaning for you, what with it being the home of the legendary Monsters of Rock extravaganza?
Ben: “It’s definitely an honour to be a part of it, like you always hear about it when you were a kid. I never thought I’d even be here let alone play it, y’know. But, it’s just a show for us – it doesn’t really change the way we play or anything like that. We’re not like, more nervous or anything like that when we go on, we’re just like ‘whatever’, it’s cool.”

DiS: So tell me about your new album.
Ben: “It’s out August 2nd I believe and I’m really excited about it. It’s been a really long time since we had a full-length record out. We’ve explored a lot of new ideas and stuff.”

DiS: What kind of things can the typical fan expect to hear?
Ben: “Well there’s a lot that the typical fan would expect, there’s gonna be a whole lot more. Like in the past the songs themselves were very dynamic but for the first time the whole record’s very dynamic, the actual songs are completely different, like way more mellow songs and really jazzy songs.”

DiS: I think that was the thing on ‘Calculating Infinity’, like on the first track there might be a short electro sample or a little jazzy moment but then that was it; you kinda touched upon things here and there but you were expecting those moments to be expanded on a little more.
Ben: “Well that’s it. With ‘Calculating...’ we achieved what we wanted to achieve and now we want to try new things. There’s a lot more attention to songwriting and the structures this time. 'Calculating... was the most chaotic and crazy record we could make and there’s a lot of what people [would typically] think Dillinger would have, like all the chaos and technicality and stuff like that, but yeah, the songwriting [this time] is way more structured, which was a new challenge to us.”

DiS: Last year in Play Dead you said Relapse were great at a certain level but that you’ve outgrown their capabilities, elaborating that as a band you don’t want anything to hold you back. Now, you switched to Epitaph for the EP with Mike Patton but the new album is back on Relapse, right?
Ben: “Well, we never switched labels, we just did an EP on Epitaph. We were always on Relapse but the reason why did an EP on Epitaph was to spread our wings and try to get in front of some new people and be in a new atmosphere. But we never left Relapse as a label. That’s a misconception for a lot of people, especially since Epitaph has a bigger presence sometimes in different places, like here in the UK, but it was really just for a one-off EP. And we really wanna always try new things like that, like release stuff on new labels and play with different kinds of bands and play different shows and different festivals. We never try to be pigeon-holed in just the metal scene which Relapse [is a part of].”

DiS: So you feel the release on Epitaph helped you with that?
Ben: “Yeah, that was one of the things that we tried to do, whether it’s having bands on tour with us that you wouldn’t necessarily think would be with a band like us or doing EPs on labels like Epitaph or whatever. Just always trying new things, you know.”

DiS: What’s happening with the band’s various side projects then? Do you have any records coming out any time soon?
Ben: “Well Greg - our singer - has just finished an EP with a band called Error which [features] Brett Gurewitz from Bad Religion and Atticus Ross who plays with Nine Inch Nails. He did some vocals on that. It’s already been released so check out some MP3s on the Epitaph website. Myself and our drummer Chris do a lot of electronic stuff and a lot of weird electronica programming and things like that. So some of that you’re gonna see surface on our record but a lot of it we just have [to ourselves] and we’re working on. We don’t know if it’ll ever come out as a project or if we’ll just incorporate it into Dillinger.”

DiS: Do you bring any equipment or computers out on the road so that you’re able to work on this all the time?
Ben: “Yeah totally: we have laptops and keyboards and all kinds of shit. We’re just constantly doing stuff.”

DiS: Okay, cool. So, returning to the festival theme, can you tell me your best and worst festival experiences?
Ben: “Probably every festival’s our worst experience; we don’t really like playing in that environment. Like it’s cool to be at the festival to experience it from the point of view of a band - like being backstage and seeing how it all works. These things are so massive and so well-organised - it’s amazing to just be a part of it and to look at it through these eyes, you know what I mean. But playing these things are horrible, we hate it. I mean playing on a big stage that far from the crowd is not what we’re used to.”

DiS: You do get that impression with some bands. They’re good to watch to a certain extent, especially in the festival atmosphere, but you just wish it was in a small club where it’s more intimate.
Ben: “Yeah it’s cool to be able to play in front of that many people at one time, but it’s almost like if you’re gonna be playing in front of that many people you really wish they could see you in... er... wish they could, er... what the fuck is that?”

DiS: I think that was Powder.
Ben: “...you really wish you can er... you see, being in this atmosphere is awesome! You see so much weird shit, and so many beautiful girls.”

DiS: Are there any bands you think don’t deserve to be here?
Ben: “Shit... probably us.”

DiS: So not Metallica then? What's with Greg’s caustic remarks during your set this morning? [Example: “So I hear James Hetfield’s stopped drinking? Hey if any of you guys see him later give him a bottle of JD and tell him to stop writing pussy music!”].
Ben: “It’s weird because our singer Greg is probably the biggest Metallica fan ever, you know, like EVER. But that last record they put out is pretty bad, I mean come on. It sounds like Lars is playing on garbage cans, like tch! tch! tch! But, regardless, you can’t deny what Metallica have done. It’s just fun when you know everyone’s here and psyched about them.”

Greg offers a huge grin and munches away on the rest of his meal before rescuing guitarist Brian from the clutches of the backstage hairdressers and making a hasty exit to a festival in Germany. Their new album, which, by all early accounts (e.g. the one on this very site!) is set to make the kind of dent in the rock world not seen since Justin Hawkins unleashed his frightening array of catsuits upon the nation, will be released August 2nd on Relapse. DiS advises you secure all items in the room before pressing play.