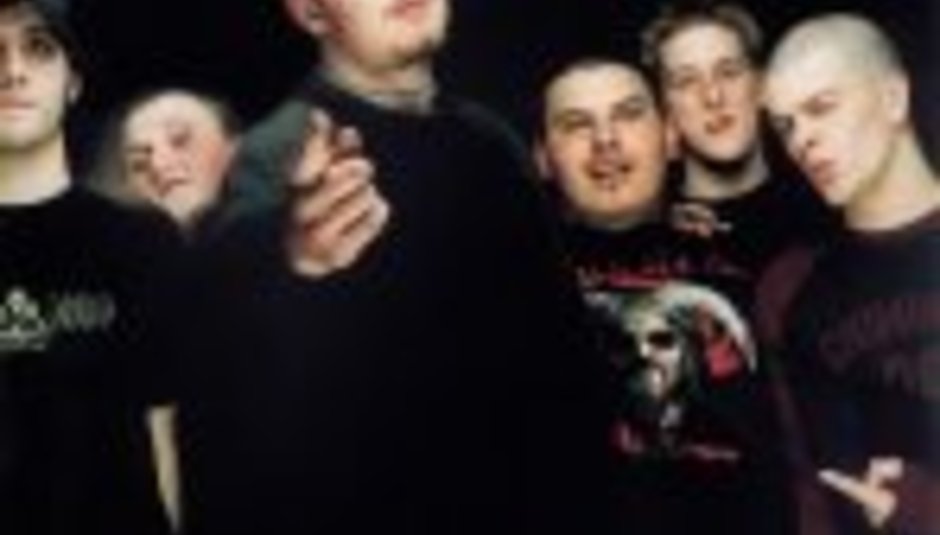 by Gen Williams June 21st, 2005
It's the hottest day so far this year, 33º at its most merciless. Shoulders and noses are burning, beer is greedily supped, and on a rubgy field on the outskirts of Reading, the festival season is well and truly under way. Bukandskit are a Berkshire-based promotions duo, and for the second year running, they've done well to assemble a line up that, diverse and thoughtful as it is, caters very ably to a small crowd of rock kids on what's turning out to be an exhaustingly golden day. As the temperature skyrockets, the collective cheer throughout the day remains undiminished, fans pogoing to Reuben, skanking to Capdown and absorbing Eden Maine's trickier metal with relish.

Twin Zero have been turning heads for about a year now. A collective who've moved on from the debris of their former bands, they produce a pummelling racket of satisfying noise - fat bass bolstering Karl Middleton's distinctive liquid vocals, as he switches between acrobatic melodies and gruff roars. They're like a more solid Earthtone9, less adventurous melodically, but with all the weight of Middleton's old band, and prove to be an early hit.

Ah, Reuben - purveyors of meat-and-potatoes rock at its finest. Years after their spell as one of Britain's most promising new bands, Reuben are not, and never will be, the over-achievers of Britrock. Their set is a cosy serving of their crowd-friendly hooks with frontman Jamie 'Most Affable Man In Rock' Lenman's between-song patter giving Tony Blackburn a fair run for his money. They know their limitations and play on them; patchy as they are, they deliver their flawed fare with such aplomb that it would seem churlish to ask for anything more from them. Their usual gusto is a touch diminished but a mass of sweaty arms fill the air with a "forest of rock hands" on request, and Reuben prove their worth as an great festie unshine band.

In the wake of impressive sophomore album Harmony No Harmony, DiS is gutted to find that Million Dead are not about to rip an glorious and articulate hole in the Main Stage floor but are, in fact, stranded in Italy.

So it's left to Oceansize to fill, or indeed carve out, said hole.

Despite occupying a stage the size of Joe Banana's famed camping stall at Reading's ubiquitous annual August shindig down the road, Oceansize bring the proverbial Noise, and bring it good. 'Homage To The Shame' elasticates off every surface, OMGWTFLIEKWOAH drum patterns clashing with spacerock guitars, and they always underpin the wrenching muscularity with a bright streak of beauty. Their new material strays into Glassjaw territory, Mike Vennart's vocals going postal in the face of Oceansize's triple guitar onslaught. You always felt like they were itching to do this - to cut loose, break out of the intricate riffing and smash something vital. Vennart lobs his guitar over the back of the stage, bends double and screams himself purple in the face. This, ladies and gents, is Oceansize's new direction.

Over, then, to the dubiously named Punk Stage, where the line-up actually, by and large, appears to be a bitchfight between emo and noisy abstraction. Between breakdowns and technical fuckups, the =emu=tastically monikered Twice Upon A Time - let's take a moment to appreciate the novelty of that name, kids - are plying a poppy brand of xclichécorex and spreading the love to "the Myspace crew". It's not that there are no redeeming moments - just that those moments generally belong to someone else. Even when they hit on a smart melody, it sounds laboured and plagiarised.

Back on the Main Stage, Sikth are diligently engaged in unleashing controlled chaos. Sikth have always frustrated before now, their wealth of ideas translating to little more than a sonic tangle that sounded messy in all the wrong ways. Curiously, in the middle of a sun-drenched field populated by sunburn and smiles, their baffling vortex of fiddly, juggernaut guitars and their schizoid, shitstorm-and-then-some rhythm section sound fucking storming.

Without Thought's turbocharged metalcore doesn't plough any new furrows, but underneath the stiflingly hackneyed rhythm section, there are interesting things afoot. Guitars seewsaw secretly back and forth, clever harmonies fighting for air beneath the predictable surface of their set. If they'd let them breathe, Without Thought could be onto something.

Onward, then, to the delicate charm of that most Ronseal of bands, Raging Speedhorn (pictured). "I know it's fucking hot, right, but at least look like you wanna see us. Fucking pussies." It would seem that their subtle idiosyncrasies are lost on today's crowd. Really though, Raging Speedhorn are smashing. They always have been. A seasoned retch of brutal, thrashing rhythm and deliciously unpleasant vocals, they're mammoth and marvellous, devoid of pretension but miles above the lowest-common-denominator moron-metal they're unfairly dismissed as. A belligerent bunch of curmudgeons they may be, but the world is a better place for the existence of Raging Speedhorn. Gawd bless 'em.

Eden Maine's intense, paranoiac metal leaves some bewildered; they're not an easy ride, and it's odd seeing them in the little white marquee tent that serves as the Punk Stage, flooded in incongruously cheerful sunshine. Without doubt one of the few global contenders in the UK's regrettably patchy arsenal of serious metal talent, they're structurally astounding. They build up columns of unexpected, glowering intro noise in the middle of their songs, stretching it to breaking point then crushing it into rubble. As Simon Davis and Phil Buch's twin guitar complexities vie with the manic drumming, Adam Symond's acidic, roared vocals keep things sharp. They consistently manage to be intriguing, unusual and unpredictable without losing the plot to self-indulgence.

Biffy Clyro inspire adoring devotion and abject indifference and, it would seem, scant middle ground between the two extremes. As the air cools and the funfair shuts up shop for the night, for the disciples spread before the stage, today's headliners are a bastion of smart oddities and snips of anthemic, sing-along genius. For this writer, they're a band with fantastic, ass-shaking, compelling intros... and absolutely nothing in the way of songs. 'Glitter And Trauma' kicks off with a dazzling, dizzying array of beats and brilliance, yet rapidly descends into plodding, imbecilic drums and a repetitive chorus. Despite pulling clever twists into every song - a weird breakdown here, elsewhere a peculiar ear-pricking riff whose entire lifespan is about two seconds long - they remain frustratingly average. As I write, they're twirling out a ska intro that, wait for it, has just morphed into fidgety guitar twiddling; but every hook and trick exists only for itself. Every idea is narcissistic in its desperation for acknowledgement, too selfish to allow itself to be tied to something as coherent as a song, and Biffy Clyro aren't sophisticated enough to make a virtue of chaos. The first thirty seconds of each song justifies their existence, but there are bands out there doing things more interesting and thought-provoking than Biffy, and with far more aplomb.

Even so, they make for an egalitarian choice of headliner, their eccentricity and the adoration of their fans making them a far more satisfying end to the day than the expensive giants regularly wheeled out at Glasto and Reading/Leeds each year in increasingly tokenist, my-dad-is-bigger-than-your-dad gestures on the part of the promoters. The established summer festivals grow ever more gargantuan, prices soar and with them, antipathy towards the companies responsible (Mean Fiddler, Clearchannel et al); small matter. Pop will eventually eat itself, or at least bite itself fatally in the arse and bleed to death in a wretched, scummy corner with no-one to bandage it up or stuff it with morphine, having antisocially priced itself out of the market. Meanwhile it's invigorating to see smaller festivals like Bukandskit and the much-loved Truck proving that it's possible to sidestep the money-grabbing antics of larger events and put on great shows that cater to their audiences as people rather than as a cynically defined demographic.