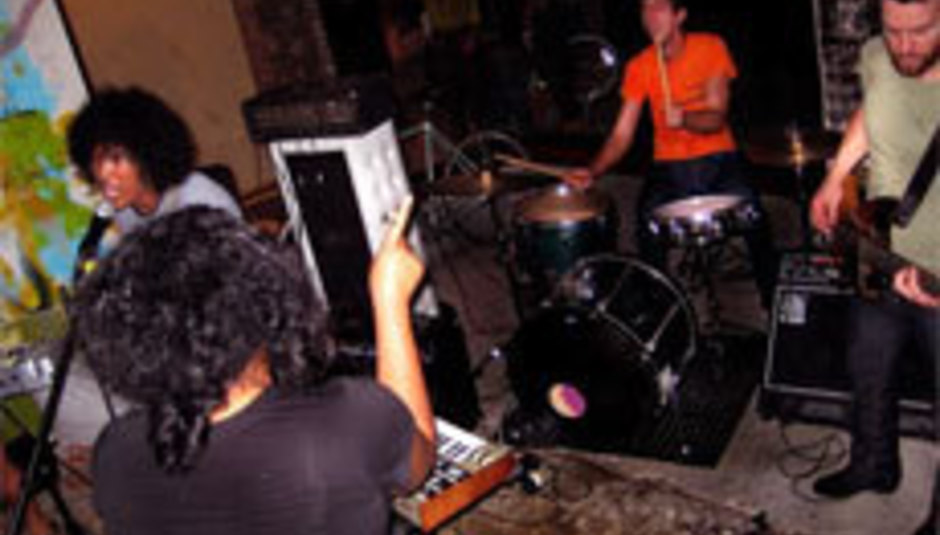 There will be DiScovers that introduce you to more exotic birds than Florida's Black Kids. Debut EP Wizard of Ahhhs has already been touted by all the usual peddlers; the band's humid, junkyard blend of post(-party) pop-rock and dazed, '80s fervour should have reached your ears by now. Whatever merit lies in the teetering piles of hype remains, thankfully, to be seen; but Black Kids will burn up soon, their skies are turning pink.

What are your plans for the next few months?
Reggie Youngblood: CMJ, release 7" in November, and play the UK in November. And maybe some guitar lessons...

Any particular reason for the name, other than the obvious?
RY: I'm notorious for coming up with horrible band names, but we really didn't come up with 'Black Kids', it kind of imposed itself upon us. That story is too long, but I do like how the name can be seen as dangerous, controversial or whatever, but in reality it's innocuous, like Sex Pistols or Buzzcocks... there's the appearance of something naughty going on, but really it's harmless, and you have to ask yourself, why did I think this or that?

Are you surprised by how positive the reaction to Wizard of Ahhhs has been?
RY: Not really. I think the songs are that good. I'm more surprised that people are actually getting a chance to react, that they're even hearing our songs.

The obligatory how did you meet/form/get to this stage question…
RY: I've been playing music with Kevin Snow for over ten years. When he got sick of me, Owen Holmes took a chance, which directly caused Kevin to get jealous. So, he came back around... Ali, my sister, is the most talented person I know (and I can bully her), so that was an easy decision, and Dawn...she was a concession I had to make to get Ali to play, (they're best friends). Luckily, it turns out that Dawn's the most accomplished musician in the outfit.

For want of a better word, there's a lot of space in your music - is living in Florida really as nice and as chilled as you make it sound? Or is the band a kind of release?
RY: It can be a chill. But I already live a very undemanding life. I refuse to work, aside from watching my godson. So, I spend my days lazing about my apartment, reading, and listening to music. Maybe that space you hear in our songs is the vast uselessness I make of my time. Or reverb.

The way the music sounds - there seem to be influences from each decade since the war. But whenever it seems like it's gonna lose itself in doo-wop or girl group or power-pop or ‘80s synths or britpop something pulls it by the scruff of the neck back into today. Is there any concept as grand as post-modblah; retro-futurism behind what you do, or is that mix natural?
RY: Yeah, part of it is concept, only in that we love geeking out and dissecting very specific elements of pop music that we love. "Oh, this bassline! Christ! That fill! What is that noise?!?" And sure, we definitely take something away from every era consciously, but at the same time, it feels very natural to do so. I realised a while back that pop music is all about theft, but not in an unkindly sense. The heavy use of samples used to bother me, until I studied the history of blues in college. Back then, it was common practice for a bluesman to take a song, reinterpret it, and present it. Everyone was in on it, and it didn't take the pleasure out of it; everyone was like, "Yes, I know what he's doing here, he's taking this and making it that". So, there was pleasure in the recognition and pleasure in the fucking with it. Then the same happened when sampling came about. In any case, we're very comfortable with ‘borrowing’ ideas.

Ariel Pink - an influence?
RY: I'm not familiar. Worth checking out?

Yeah, I'd say so. There's sensitivity in there, isn't there? Do you worry people might see your music as too soft?
RY: Well, at this point, I could see people perceiving the music as "soft", but that's only because they've only heard half of Wizard of Ahhhs. Pitchfork reviewed the four songs on our MySpace as an EP, but there are actually some other tracks we recorded in that session... and those are somewhat more abrasive.

Best cities, shows, experiences?
RY: We've only played at home and Athens, Georgia. So, being that I've been playing in Jacksonville for over a decade, Athens wins. Besides, it's the Mecca for indie music in the south.

When was the last time you had "really good sex"?
RY: Is it ever REALLY good?

One more - influences?
RY: Really, we're influenced by every popular song we've ever loved. From New Edition to New Order. From Neil Young to Fine Young Cannibals. From Prince to Queen...You get the picture, yeah?

The band are rare to the UK but will play their first shows here in December; please be obliged with what's below:

For now, another obligation...