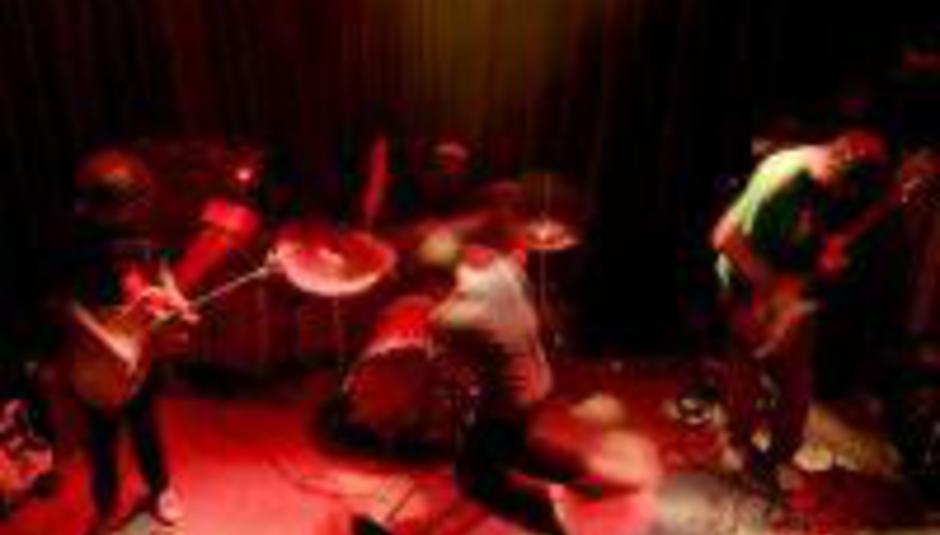 The Twilight Sad: talking with fireworks

The Twilight Sad: talking with fireworks

On the back of a (very) rough demo at the close of 2005, Glaswegian four-piece The Twilight Sad found themselves signed to the demi-legendary British label FatCat; in 2006, the band received the prestigious Planet Sound Demo of the Year award. But it wasn’t until the past twelve months, with the release of their highly lauded debut album Fourteen Autumn & Fifteen Winters and triumphant sets at South By Southwest and the Pitchfork Festival, that the band have garnered a fraction of the acclaim they deserve.

DiS caught up with Andy MacFarlane and James Graham – the band’s completed by Mark Devine and Craig Orzel – in the midst of a tour with fellow Scots Idlewild to converse about future plans and the death of pets.

How has this tour been going?
It’s going well. Tonight has gone well, a good crowd. There have been a few shows that haven’t: we played a show in the Highlands to about a hundred people, mostly fisherman. There was an eight-year-old girl dressed as Snow White dancing around…

And have you found it difficult playing to Idlewild’s audiences? With the exception of you both being Scottish there isn’t much similarity between the bands.
True. I don’t think we have been badly received on the whole, but some of Idlewild’s fans have been shitting themselves, as we are far too noisy for them. But it’s amazing to be playing with Idlewild after being fans of them for so long.

Before this tour you were in the US, right? How did that go?
It went well, for the most part. We played a show in Chicago and the promoter didn’t want to pay us because we were too noisy for him… and the DJ played for too long before we went onstage. Who gives a fuck about a DJ?

Exactly. Something I’ve noticed about your live show is that the sound is more visceral, and less layer-based, than on the album.
Yes, that’s definitely a conscious thing. You need to grab someone more live, so whereas on the record there is more of a layered sound live it’s more... apparent. Plus, it would be impossible to capture the different guitar parts, the accordion and sound effects (of the album) live.

Something that is also prevalent throughout the entire album is the deeply personal tone of the lyrics. Lines such as “The kids are on fire in the bedroom” certainly seem to have a lot of emotional weight.
All of the songs are written about either personal experiences, and mostly regarding people we know. I got called a paedophile by someone hearing that particular line… maybe you shouldn’t write that!

Don’t worry, I won’t. (Liar – Ed.) The next line in that song (previous single ‘That Summer, At Home, I Had Become The Invisible Boy’) contains the dreaded ‘C’ word…
Aye, I think ‘blunt’ - use your imagination - is an undervalued word in pop music.

In closing, what are your plans for the immediate future?
We are doing a tour of Europe. Some dates are with Beirut, others we are headlining. It will be good touring Europe, but we just want to get back and record our next album.

As ‘Love Steals Us From Loneliness’ rings out from the stage, The Twilight Sad head back to their dressing room to get ‘blunted’, as Andy so delightfully puts it. The band will be writing and recording their second album in early 2008, and their forthcoming UK dates are as follows:

Fourteen Autumns & Fifteen Winters is out now on FatCat; the album is one of DiS’s top 50 records of 2007, and can be voted for here. More information is yours for keeps at MySpace.