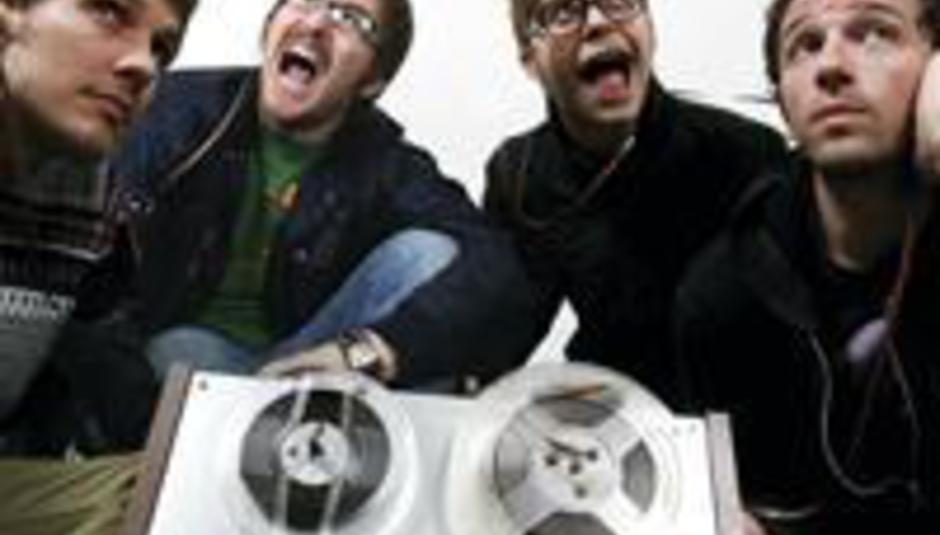 From the pirouetting can-can chaos of ‘Le Ruse’ to the hurdy-gurdy agitation of ‘Lines’, Walk It Off resembles a somewhat familiar collection of calamitous showtunes. With a recognisable hustle and bustle, Minneapolis outfit Tapes ‘n Tapes return, trekking a familiar terrain, with the follow-up to their widely applauded debut effort The Loon, a many-visaged menace that left many unsure as to where the quartet were headed.

But rather than attempt to steer proceedings into a realm that’ll see them wrapping arms ‘round a new set of enthusiasts, the record instead cements their status as a band taking a traditional tack but then bending it back out of fashion.

Since lynchpin Josh Grier formed the act at college in 2003, the band have eternally been tied to Pavement and Pixies, an association that is largely down to nothing more than the difficulty in pinpointing Tapes ‘n Tapes and the unassuming college slacker quality to the band. Speaking to the act before they returned to the scene of the crime, jetting off to SXSW to display themselves like graduates returning to college to parade round their newfound status, having some level of expectation doesn’t seem to suit the band. Having shot to blog infamy after a soft-release of their debut in 2004 on their own imprint, Ibid, before XL picked The Loon up amid the furore that surrounded the act at the turn of 2006.

As opposed to their debut platter, written in a Wisconsin shack with no water (one amenity you'd expect renowned knob-twiddler Dave Fridmann, producer of Walk It Off, to have provided), there is a level of anticipation circling over where Tapes ‘n Tapes take off from the initial success. So do they feel certain obligations?

“There’s a fine line to toe because in one respect you don’t want to say ‘fuck you’ to the people who liked the last record by making something that deliberately goes against what you’ve previously done,” begins multi-instrumentalist Matt Kretzman before being interrupted by Grier.

“Or do anything to please anyone besides ourselves. The main focus was the same as with The Loon, of making a record we were proud of, and that was all we ever set out to do with this record. It’s one of those things you can’t control, what people think of your music, and as long as we like it at least we can live with ourselves at night. I would be pissed off if we were doing it for the money.”

“I think for the most part we approach each song as its own little entity and so never feel there's a need to move on from The Loon because there wasn’t a certain treatment we applied or a particular conceptual focus.”

“We didn’t feel the need for any orchestral arrangements just because we had the budget”, Kretzman keenly points out.

Resembling the same tumbling lunacy of The Loon, a continuity of sorts between their debut foray and its follow-up is established, if not just in the colour scheme of Walk It Off’s artwork featuring its creators' confident strut. The title (which also happens to appear as an album track on labelmates the Breeders’ forthcoming record) picks from a scenario of a typically betrodden outlook.

For the first time in the interview drummer Jeremy Hanson, the youngest member, having joined the band whilst still in college, perks up. “Well, the very beginning of Walk It Off was my idea I guess. I got it from what baseball coaches would shout at me when I got hurt in baseball. Sometimes it is good to walk something off and sometimes it definitely isn’t good to walk something off.”

“We had joked about the cover being a man crippled, something really demonic, but we decided it was taking it a little too far”, adds Grier.

If there is one charm that particularly remains it’s the sound of the record, cracking with that same rusty lo-fi sheen and ramshackle recording approach that was evident on their initial EP release in 2004 when only half the current roster was involved. Recorded with Dave Fridmann (of Flaming Lips/Mercury Rev/Mogwai producing notoriety) at his Cassadaga bunker, Kretzman saw his influence over proceedings as invaluable.

“He was like a Zen master. He’d take his shoes off when he came in and knew everything we needed to ask him.”

“There’s not a rigid click-track mentality and we didn’t necessarily try to make it perfect as that aesthetic wouldn’t really contribute to the songs.” Where previously mumbled and grumbled, there seems a newfound confidence to Grier’s vocal delivery, still a neurotic rasp, but muscular in the same way as Modest Mouse ringleader Isaac Brock. Yet the ambiguity remains with lyrics eternally muddled and it difficult to figure out the themes of tracks with what seems a deliberate confusing of states.

“I think for me on this record I was more confident with the stories I had in mind whilst leaving things abstract enough for there to be an open interpretation. Rather than a hard line of instruction of what a song is about we'd rather people read their own interpretation of the lyrics.”

“I think it makes it more interesting it have some ambiguity and to leave it open for people to read it one way or another.”

Also crucial to the charms of Walk It Off is the contented attitude they seem to have adopted. Having previously mentioned that this may be the last record for a while it seems appropriate to ask whether the act has much of a future plan laid out, or if they see themselves as having much longevity beyond Walk It Off.

Grier casually turns to his bandmates. “Do you want to make another record?” The others shrug non-committedly.

Grier continues. “I do. We all get along and we’re all friends and we’re all interested musically. Having my job on the side is not an indication of how well I think the band is going to do but more an indication I want to continue to make records as long as people want to listen. If everybody hates this record then all of us will still be writing music and making records because it’s what we enjoy doing.”

Looking slightly resigned as he says this Grier seems utterly convinced that Tapes ‘n Tapes continuation to plough head-first into the furrow The Loon buried. Though not breaking any rules or pushing any boundaries that have not previously been crossed, Walk It Off finds Tapes ‘n Tapes stepping into a confident stride.

“I’d like to continue to release records, especially if we can continue to record in the way we were able to on this one. Even if we’re doing it from home and it’s interesting then I don’t see why there’d be any reason to stop.”

Walk It Off is available from April 7 on XL Recordings; the band tour the UK at the tail-end of May and into June. Looksee:

These are men of their word. Walking it off, Tapes 'n Tapes are appealing for walk-a-thon donations for Cancer Research. Head to their website for more info.