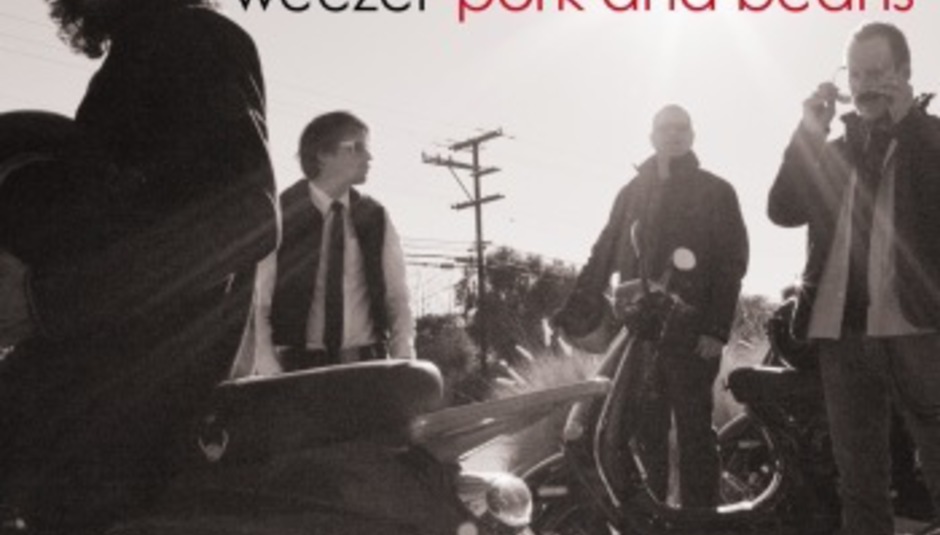 Weezer – ‘Pork And Beans’ (Geffen)
Weezer are always welcomed at the DiSopolis, whatever the weather and nature of their latest wares, given our previous together. True, their third self-titled LP (review) is far from their best-ever album, but it contained its share of pop-rocking highlights bulging with lyrical tomfoolery, and this was among them. A far stronger lead single than the first cuts from Weezer’s past two albums, ‘Pork And Beans’ mixes the joyously nonsensical with an undercurrent of non-conformist attitude – “I don’t give a hoot about what you think,” cries Rivers, fist clenched and defiant. Into their autumn years as a band they may be but still Weezer have targets to kick against, and just occasionally the resulting music is as carefree and comfortingly classic-Weezer-styled as this. Single of the Week, then, partially to present us with the opportunity to run this video again.

MGMT – ‘Electric Feel’ (Columbia)
Can’t lie to you – I much preferred the album mix of this, MGMT’s second single from their Oracular Spectacular debut (review). This single mix seems to lack some of the beefiness of the original, but still it bleeds funk like a haemophiliac Prince juggling daggers. Plus you get the definite impression that this Brooklyn duo went through their parents’ prog-rock records as kids, too. I can relate, boys.

The Courteeners – ‘No You Didn’t, No You Don’t’ (Polydor)
If Dirty Pretty Things are running short on ammunition at present, at least we can take comfort in the knowledge that once they were armed to the teeth; The Courteeners, on the other hand, have never demonstrated evidence of any discernable ability worthy of their growing profile, and ‘No You Didn’t…’ plods along like a million post-Britpoppers before them. Monotone vocals, dreary strums, an initial impression that’s oddly Kooks-shaped. Yes, I did, the once, and I won’t again, thanks. Next.

Dirty Pretty Things – ‘Tired Of England’ (Vertigo)
While The Libertines’ romanticising of our Sceptred Isle didn’t quite grate, given the great tunes the foursome shackled to their rose-tinted tales of a homeland’s greatest assets, this curtain-raising single for Dirty Pretty Things’ second album Romance At Short Notice is perhaps a jangling ode to Albion too many. “How can they be tired of England?” This sort of tired and predictable jaunt provides answers enough – get some new material, Carl.

Glasvegas – ‘Geraldine’ (Columbia)
Recent NME cover stars Glasvegas surely can’t believe their luck right now: here they are, delivering desperation-tinged songs of failure and misfortune with the sort of whinging burr that’d confuse the fuck out of The Twilight Sad’s James Graham, all buzzing Jesus & Mary Chain guitars and twinkle-eyed nostalgia, and the public are buying it. There’s a history they don’t really want you referencing – how only a couple of years ago the four-piece sounded nothing like they do now – but that’s just proof that reinvention can truly reinvigorate. There’s the feeling that their flavour-of-the-season appeal will wane before an album drops, but for now we’ll trundle along to the sound of this pleasing depression ‘til the next band to twist pop’s past into not-so-new shapes presents itself.

Barringtone – ‘Snake In The Grass’ (This Is Music Ltd)
Breezily sprightly synth-pop in a slightly Devo-shaped mould from ex-Clor types; Barringtone don’t immediately grab, but after a few experiences prove themselves to be quite the gleeful distraction from the mundane sound-alikes polluting pop’s waterways. Actually, it does remind one quite acutely of Clor, which can’t be a bad thing given said defunct act’s sporadic displays of excellence. More, we will be listening out for from this newly formed London combo.

Black Kids – ‘Hurricane Jane’ (Almost Gold)
So is Reggie Youngblood hotel/motel or what? First he’s talking about dreaming of some girl ever since he was a little girl, and now he wants someone or other inside him. Does it matter? Not just yet, as Black Kids’ second single from their debut album Partie Traumatic is all sweet-tooth ache and butterflies in the belly, sexual ambiguity buried beneath ginormous hooks. Yeah, it’s like The Cure given a facelift by some shady pop producer whose usual line of work sees him shape the Britneys and Christinas of this world into temporary mavericks, but still: ‘Hurricane Jane’ is the sort of almost-ballad that previews its parent LP in a most positive light.

Five O’Clock Heroes (featuring Agyness Deyn) – ‘Who’ (Glaze)
New York-based outfit Five O’Clock Heroes rope in the supermodel of the season to lend backing vocals on a number that’d pass as Police-lite pop-rock if it wasn’t for the squealing contributions of Miss Deyn: it’s an understandably decent idea on paper, this collaboration, but surely once the band and label heard this final mix somebody could have intervened and suggested that the pretty face keeps her mouth shut, and simply graces the single’s sleeve? And she’s changed her hair now, making the accompanying video so out of date. You’d be hard-pushed to uncover a more meh single of recent months than this, all told.

Elle Milano – ‘Laughing All The Way To The Plank’ (Brighton Electric)
One of a perpetual slew of guitar-toting bands bubbling beneath the mainstream, Elle Milano are never likely to break out of their ghetto of basement club shows and two-dozen hardcore admirers with numbers like ‘Laughing All The Way To The Plank’, but the limited-edition release does at least showcase the trio’s decent handling of an aggressive melody, a la Ikara Colt in their most immediate mood and even Panic At The Disco. Chances are they don’t care for fame anyway, or else they’d be trying a different formula, and such an approach suits them well – they’ll never be anyone’s favourite band, but Elle Milano certainly have spirit and spunk enough to get bodies moving, and colliding, down some sweat-hole venue.

Florence and the Machine – ‘Kiss With A Fist’ (Moshi Moshi)
Domestic violence is often seen as some triumphant topic to tackle in music. But like watching one of the Duchess of Kent’s darlings making their way through ham-fisted karaoke takes on The Crystals’ 1962 gem ‘He Hit Me (It Felt Like A Kiss)’, Florence Welch’s seizing of the subject is nothing more than a tactless trust fund prattle. Young Florence has distanced the track being about domestic violence but it sounds like the whimper of someone crawling out a corner. “A kiss with a fist is better than none”. Don’t tempt fate. SS

Edwyn Collins – ‘Home Again’ (Heavenly)
There’s Jason ‘Spaceman’ Pierce playing the fey wounded lamb after his ordeal when all he seems to want to do is bark about it, and then there’s Edwyn Collins. Following Collins’ cerebral haemorrhage and six months laid out in A&E a few years back not many thought the former Orange Juice lynchpin would return to record, let alone an album of such majestically wilted soul-pop. His pine is now a comforting croak, and ‘Home Again’ is an utter triumph. SS

Daedelus – ‘Make It So’ (Ninja Tune)
Awkward experimental hip-hop cohort Daedelus (LA beatnik Alfred Darlington) has been planting these lurid flowers for an age. With its melancholic vocal, in spite of the new LP Love To Make Music To making a few gawky steps, ‘Make It So’ is one fine slice of exhausted electro. Breaking the track’s toes so it ambles rather than strolls, the Samiyam remix is worth three of your minutes. SS