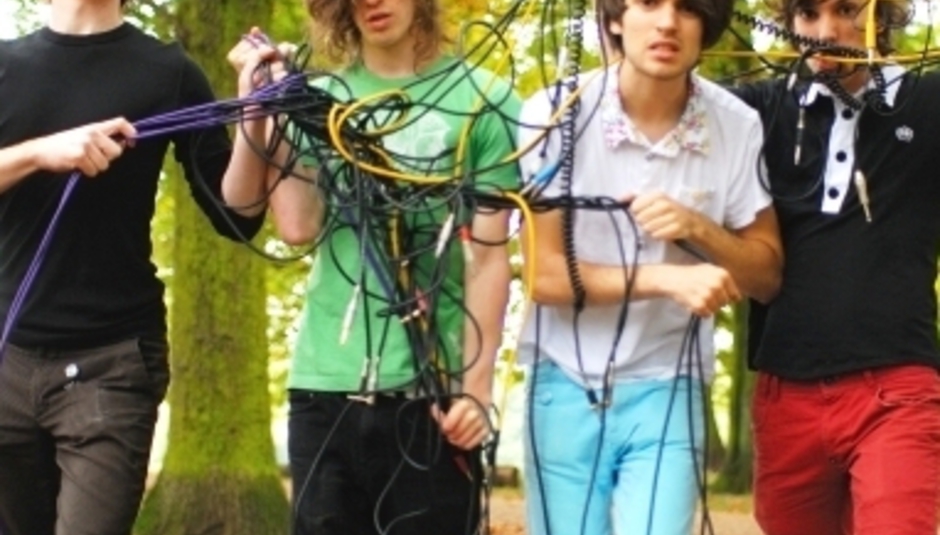 Fresh-faced Castle Donington synth-pop four-piece Late Of The Pier are good to go with their awaited debut album, Fantasy Black Channel. Coming your way via Parlophone on August 11, the album collects their singles ‘Space and the Woods’ and ‘Bathroom Gurgle’ alongside ten other songs and a ‘hidden’ track.

Produced by Erol Alkan, the album sees the band – Samuel Eastgate, Andrew Faley, Sam Potter and Ross Dawson – making good on their early promise. Ahead of the record’s release, DiS invited the quartet to piece together our latest mixtape. Excellently, they went a step further than most and actually created the mix for you to hear:

Michael Jackson, ‘Rock With You’

The Beatles, ‘Fixing a Hole’

Four Tet, ‘Smile Around The Face’

The Prodigy, ‘Baby’s Got a Temper’

And says the band, gearing up for sets at festivals at home and abroad, taking in Germany and Japan:

"Talking about music is like dancing about architecture. So here is our little dance. These are the songs which opened our ears to a world outside our world; a world which makes deck chairs think twice about being so bloody hungry. Bootsy Collins is not on this mix and neither is anyone in the periodic table. This passage is reactionary so stop your reading and start your listening. Oh no, not the vicar, washing his teeth with turtle blood, waving his handkerchief to stop the flies from sneezing. Modern day music is turning time and heaven can wait for its bang to come back. The second half of the mix is a sordid affair between old and new, like a teacher fumbling with her student. I'm jimbling into a new pair of trousers, minding my own business until _wham: an egg maiden packs her wigwam. My face was everywhere. She packed away her stationary and sang until the city wept. This mixtape is for your ears and not your eyes.

In addition to a number of festival dates – find them all at Late Of The Pier’s MySpace page here – the band play a special in-store at London’s Pure Groove on August 12. Say the people behind the show:

“For the first time we’re going to be charging for an in-store. It’s a one-off and we are offering the fans something really special. The 12th is the day after Late Of The Pier release their debut album _Fantasy Black Channel, and at 6.30pm 100 fans will have the opportunity to see the band play a set, get a signed album and a limited edition (100) A3 screenprint designed by the band specifically for the in-store. All for £15.

“The idea is that there are no queues; you can get a wristband that gets you into the in-store either from Pure Groove or the store’s website. Then armed with this, you’re into the in-store, get the signed album and screenprint and go home a happy Late Of The Pier bunny. More info here.”_

In addition to the above offer from Pure Groove, DiS has framed artwork for the band’s ‘Space And The Woods’ single to give away, as well as copies of the song on 7” and 12”. To be in with a chance of winning the goodies, simply answer the following question:

Late Of The Pier come from where?

Post your answer in the comments below. A winner will be selected at random on July 30 and contacted via a DiS note. Good luck!

Video: Late Of The Pier, ‘Space And The Woods’