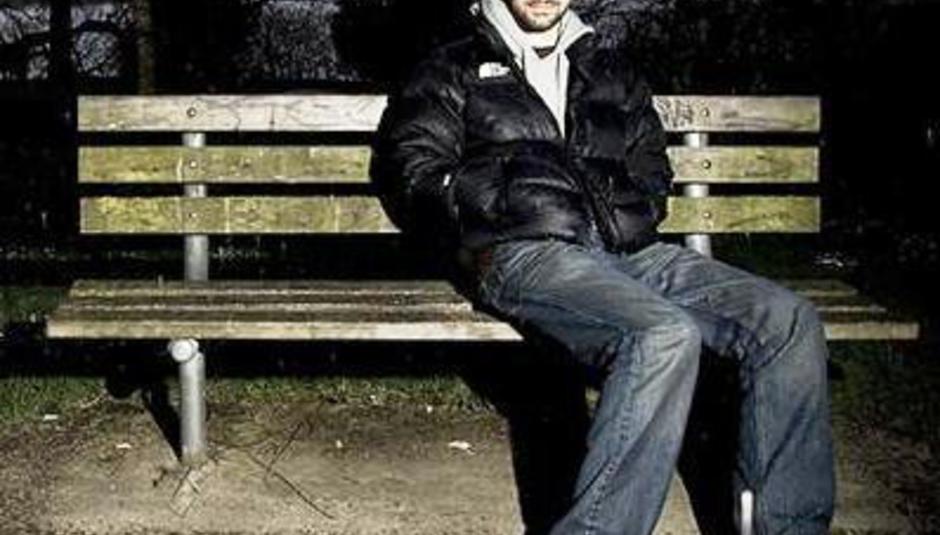 After releasing one of 2008’s most overlooked albums on the ever excellent Fat Cat Records, many-placed musician David Karsten Daniels has been getting about a bit. To give him exposure under the banner of DiScover is a little odd seeing as the album in question (Fear Of Flying, find it reviewed to the tune of 9/10 here) is his fifth in total, but this will be the first many people have heard of him.

And boy, will they want to explore the back catalogue – weighty themes are dashed off with careful ease, childlike emotions woven through deft and blindingly well-read musical influences, it’s all extremely entertaining and, yes, a little affecting for those who miss being a kid. DiS caught up with DKD in an alleyway in Farringdon, London before he took the stage at the Betsey Trotwood…

What have you been up to between shows?
Not too much, just trying to keep my jetlag intact and talking to my wife over the internet. We just got married a few months ago.

Aww, congratulations!
It’s not the best timing to get married and to then have a tour and a record come out, but we’re doing it!

I want to talk about the record a little. Is it governed by any particular themes?
Obviously the record is about ageing. And obviously the record is about impermanence. Maybe it comes across that the record is about… I shouldn’t say what it’s about, it’s about whatever it’s about for the listener… I was thinking a lot about how roles in families change as people age. Parents becoming children, children becoming parents, children becoming caretakers. When I was a teenager, like, I’d never broken a bone, I’d never had any particular difficult thing happen in my life, I had a pretty uneventful childhood, good parents who are still married to each other. I just had this feeling of invincibility, y’know? As you get older you start to see it’s not that I’m invincible, or that anyone is, it’s that I’ve been lucky. Really bad stuff could happen at any moment.

Tell me about the religious aspects of the album.
Well, I grew up in the South, in Texas and Alabama. Even if you’re not religious you can’t get away from religion and its effect on culture and the way people think about things. I never really thought about that when I was growing up, that was just the way that it was. When I moved around a little bit later on and lived in the Pacific Northwest, which is largely pretty agnostic or atheist, or when I came over and lived in Paris for a while, y’know, people just totally walked away from the Catholic church. I came to see that’s it more complicated and that there’s a lot of different ways that people can approach life and themselves as a part of the world, and beyond, if there is anything beyond. That’s something I’ve been trying to think about over the last two records. One of the things I tried to do with this record was, and I’m not any kind of authority on these things, I only have my own experience, it’s just that… everything I know is framed by my culture and what I’ve grown up with, how I’ve been indoctrinated, and no-one else in the world is any different. I think it’s important not to take that for granted when you think about why you think about the way you think about anything. It’s very easy if you’ve grown up in a liberal household around liberal people to think, “Well of course this is the way it is, of course Bush is an idiot, of course Gordon Brown is an idiot,” but if you grew up in a different way you might just turn around and think something quite the opposite. It’s very important to control that, there’s no neutrality, in media, in religion, in anything. Sometimes that’s kind of frightening, because you see that we are products of where we come from. Even if you feel like you have free will or the ability to think for yourself, y’know, what if you don’t?

On Fear Of Flying there’s a song called ‘Heaven Is A Lie’, which makes plain your position on religion, but to then juxtapose it with a setting of the Lord’s Prayer on the album’s final song, ‘Evensong’, seems to suggests you still have respect for the way religious music is written.
I have respect for the musical settings, but also for the… I mean, something that lasts that long, be it the Koran or the Bible, it’s not bullshit. People in Africa who dance to ward off ghosts wouldn’t have done it forever if it didn’t work. You can’t just look at religious people or superstitious people and say, “Gosh, you’re not enlightened the way that I am,” that’s too easy, it’s more complicated than that. I can’t sit here, just because I have a hard time seeing something the way a truly religious person does, or someone that says we’re single-celled organisms that evolved over millions of years, I can’t look at either of those and say “oh you’re such an idiot and I’m so enlightened”. That’s what the record is saying, not “I’ve thought about this and I’ve figured it out,” but “I’ve though about this and I have even more questions than when I started.”

Could you tell me about the influences you took from your more academic musical training?
When I was in high school it seemed to me like, of course I’m going to be a composer, and I should go to college because I don’t want to work in a gas station, I guess I’ll study music. That was really all that it was, but the benefit of doing that, even though in retrospect I feel I could’ve spent my time better studying other things, is being able to be exposed to a lot of different kinds of music that you otherwise wouldn’t find on your own. I was exposed to Steve Reich, who was a big influence, I was exposed to Gesualdo, this madrigal composer from the 1600s, all kinds of different things. Stravinsky, you know, and other things that most people find. I listened to a lot of Pavement in college. I feel very fortunate to have been exposed to a lot of different things and to have the opportunity to draw from them. There are very few people who come up with something new. Most people, the best they can hope to do is steal a little piece from here and a little piece from there and try to combine those in some way. So that’s what I think a formal music education is good for, but I guess my interests now lie in some folk music, some 20th Century Classical music I guess, musique concrete, jagged guitar playing like Crazy Horse… throw them in a pot, and what might be interesting at the intersections?

The reason I really enjoyed the record was, having done a music degree myself, that I could hear all these influence piling into the songs. Like ‘That Knot Unties?’, that sounds like a minimalist piece, lots of small cells of repeated music lined up next to each other.
That song is like, if I were to make a hip-hop track, and I’m not a hip-hop artist, I’m not a rapper, how would I do that? Thinking about that. Having heard Steve Reich and thinking about that too. Having heard a smattering of African music, but really not very much, and seeing what might be interesting. On the flipside, I do think it makes the record harder to market. That’s been really interesting, because the reviews, depending on which tracks they focus on, they come up with very different things, like, “here’s a folk record,” or “here’s a rock record,” or “here’s a… whatever”.

That must make you feel very proud, though.
It does, but at the same time, it makes it difficult to play shows. For two-thirds of the time I’d really like to play in an art museum or a church, something seated, and then for a third of the time I’d really prefer it to be a sweaty rock club where everyone’s drinking.

You’ve obviously got a fragmentary way of playing live, but when you’re recording and all the resources are in front of you, how do you make the final decisions on what something will sound like?
It’s quite a bit easier, because apart from the horns and strings and some of the drums, I mostly end up recording everything myself. If there’re 80 channels of audio on a track, then I’ve played maybe seventy of them. I try to take the ego out of it and decide what’d be best for the song, and if the best thing for the song is just acoustic guitar and voice then that’s cool, but if the best thing for the song is a horn section, a choir and two drum sets, then that’s cool too. I feel more comfortable as an arranger than as a songwriter, so sometimes before I even the song side of it worked out, how to arrange it is something I find easy and a lot of fun.

Do you have any aspirations to do anything even bigger?
Yeah I do, lately I’ve been listening to a lot of afrobeat. The drummer I had with me on the West Coast tour and I started listening to a lot of Fela Kuti and Tony Allen, driving across the desert in Arizona, listening to that and zoning out, going to this real Zen place. My wife and I are moving to Ashland, Oregon, it’s like a hippy kind of town. She’s very interested in dance, so today we were talking today, “When we move, we’ll start an Afrobeat band, I’ll do the band, you can do the dance,” and I feel like ‘That Knot Unties?’ is a real step. I don’t know if it comes off that way but in my mind it feels like a real step towards that. I’d be really interested in going in that direction. I say that, this last record was supposed to be a classic rock record, and it really wasn’t. So whether I actually get there, we’ll see. I’ve been doing the sad bastard singer songwriter thing for a while now, so I’m sure that’s going to creep in there no matter what.