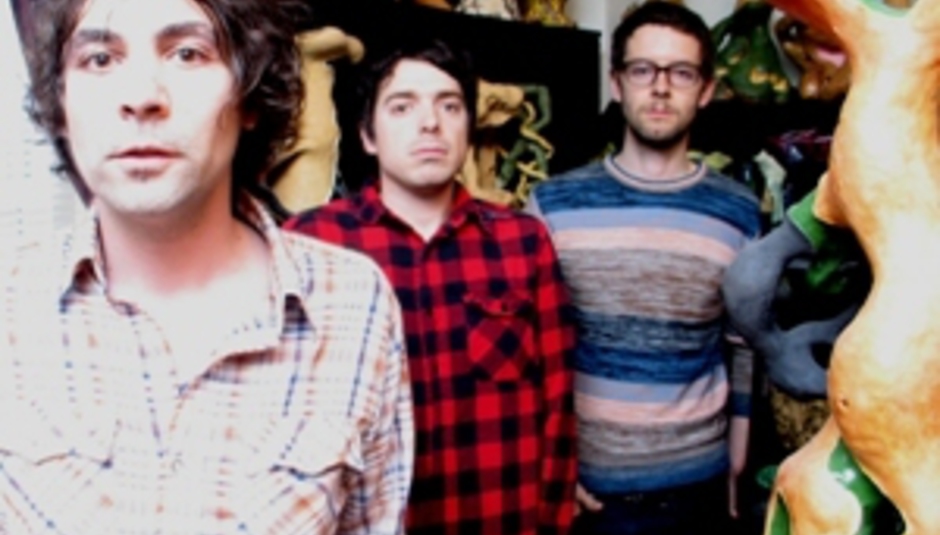 DiScover: The War On Drugs

DiScover: The War On Drugs

Ever wondered what Springsteen would sound like if he was fronting Animal Collective? Or perhaps you’ve tried to imagine the noise produced by Tom Petty leading the charge into battle with an army of Deerhunters thundering along in his wake?

Neither did we. Thankfully, Philadelphia’s The War On Drugs did. Their debut, Wagonwheel Blues (review), combines a love of great American songwriters with the experimental mutterings favoured by the current generation of nosieniks. This may sound odd, but it honestly works and makes for one of the year’s more memorable debuts. We wanted to learn a bit more about the band, so we rang up lead singer Adam Granduciel to discover where they got that name from and just what his father thinks of The War On Drugs’ music. Let’s start with the obvious. Where did you get the name?

That name was that kind of thing where you have two friends who are sitting around for years. You know, living in different places, always thinking of band na… not really always thinking of band names but someone would say something and would be like, “Oh, that’d be a good band name”. At one point me and my friend Julian were living in Oakland, California a couple of years ago and we were writing, we had all these type writers set up, like two or three type writers in my house and I ended up getting kicked out of that house cause my roommates hated it. [Julian] he, even more so, was writing long prose and at one point he started writing about the war on drugs and he said “Oh, that’d be a good name” and I was like “You know, that could be a great name”. I always thought that you could do almost anything under that name. Like you could do all different kinds of music under it. So I had it for a while in my head and then I guess when I moved to Philadelphia and eventually got a full band together, I just threw it out and started playing under that name kind of for the hell of it.

Do you ever get slack for the name?

Not really. The only slack I’ve gotten from people is that it’s too difficult to Google.

Is it frustrating to keep being told that?

How exactly did the band start? You met your guitarist Kurt (Vile) back in 2003, correct?

Where are you from originally?

So you both met in Philly then?

Why did you end up forming a band?

And now there are four of you?

Yeah, there’s Me, Kurt, David (Hartley) on bass and guitar, and Charlie (Hall) is the drummer right now. We used to have to two drummers but for a while now it’s only been one. I’ll get two eventually. For a while there it was awesome but logistically it’s a little difficult. Like you show up at a small club without a very good PA and you’re like, “Uh, we have two drummers”. I hope in the future I can get back there because there is a lot of potential there.

But the principle songwriting is still just you and Kurt, or is it just you?

I mean a lot of it is me and some of the stuff on the record was a little more improv. Like ‘Show Me The Coast’, that’s me and Kurt.

Regarding your record, some of the songs are rooted in what some would call folk rock. Yet you have songs like ‘Reverse The Charges’ which is more of an ambient soundscape. Do you see yourself as more of a roots band or experimental musicians?

I think it’s just kind of based around having these songs, you know? Like real solid songs. I mean with stuff like ‘Reverse The Charges’ it wasn’t even so much… like I was working on ‘A Needle In Your Eye’ and it was a totally different version of that song and then one day… because everything that’s going on in ‘Reverse The Charges’ minus the piano, all of that is in the background of ‘Needle In Your Eye’. It’s all actually in there. But I was working on a version of that and we were doing some stuff and I end up putting a new tape on, in my tape machine and the faders were still up in a certain place. So I put on a reel for ‘Reverse The Charges’ and all of a sudden all these faders were up where I would never have turned them up. So that kind of came out and I did a bunch of mixes of it and it ended up being something that I really liked. It sounded really nice and it worked. In some ways it’s a reprise of ‘Needle In Your Eye’. So something like that just comes out of nowhere but in terms of the ambient stuff, I really enjoy the ambient stuff.

Still, would you say that you’re more of a fan of ‘proper’, well-written songs, above anything else?

Yeah, I love artists like classic songwriters, you know, and classic songs but also try and meld that with like, you know, experimentation with ambient and noise and stuff that I’ve been doing for just as long as I’ve been writing songs.

Does that stem from a love of more modern and experimental bands like Animal Collective?

Yeah, stuff like that. Especially Sonic Youth and bands like that. I mean, I always love that and the classics like Orbison and Petty and bands like that. Sometimes you’ll sit down in the morning and be able to write a song on the acoustic or piano and sometimes it’ll be two in the morning and you’ll be working on something with the headphones on and tape machine. It then kind of fleshes out that way. I guess you just take things on and take things out and then eventually you’re left with hopefully a great song.

You don’t feel forced as a songwriter to stick to some kind of experimental rock or traditional thing then?

No, a lot of that stuff is like the recording process, you know? Like if you write something on a guitar and it changes, like a melody, you can always end up playing it on the organ through six amplifiers. It still has that melody and chorus but is not so strum driven. But some songs feel… like ‘Arms Like Boulders’, it’s a great song and I still like playing it.

Well, ‘Arms Like Boulders’ is one of your oldest songs and is definitely rooted in a more classic school of songwriting. Are the newer songs more indicative of where you’re heading?

‘Needle In Your Eye’, ‘Show Me The Coast’ and the two instrumentals, that was all done… ‘Needle In Your Eye’ was done in like five hours. We were working on an old version, like a really slower version, and then I was pretty much done with the album and then I recorded most of that at my house and went over to Jeff’s (Zeigler, co-producer) the next day and did the drums and then it was done. So that one is really new. ‘Show Me The Coast’ is really new. Stuff could go anywhere but those are definitely the most recent of recordings. Those are the most fresh.

How do you translate those songs into a live setting? Do you replicate the record or do you go for a different approach?

We go for a different approach on some of them. We use a lot of samplers live but we try to play to the sampler more than we want to play with the sampler, you know? There’s a lot of ambient stuff in there. It takes a while for everyone to lock in. We’ve had to play a bunch of shows for us feel comfortable. After a while you don’t even notice a lot of these loops going on. I’ll never obviously know what it sounds like when you’re in the room, which is the major fault of performing. You’ll never actually see the room. I mean, live, in terms of backtracks or layers, we can do a lot. It definitely gets fleshed out live, to a certain extent.

It’s safe to say some people are excited to see you live here.

I’m super psyched to come over to the UK.

Have you been before?

Have you had a chance to see any of the press you’ve gotten here so far?

It’s been generally favourable across the board. Were you expecting that?

You were or they were?

I was. I was happy that I finished it in the way that it made sense, I was happy with what I did. And obviously you’re happy when there’s good press. I was watching Godfather II. Coppola, he loved working on it, but he wasn’t really sure if it would be well received.

So the good press is a nice surprise for you?

Yeah, it’s great. Like at the end of the day, even if I had finished it and there was no label, I’d still enjoy listening to it.

Any concerns about it getting out of your hands?

I guess it really can’t cross your mind until you’re forced to deal with certain things. To me, it’s also felt like the record has been out for a while because it’s been done for so long. I mean it comes out today in the States, so… oh wow, it’s actually coming out today.

Must be an exciting time for you.

It’s cool, yeah, it’s exciting, I’m just happy that you can get it in your store and people can really enjoy it and friends from all over the country can get a copy.

And you can now tell your parents, “Mum and dad, I have a record out in a store nearby you…”

Yeah, I gave them one. We played in Boston a couple of weeks ago and I gave them an LP. And my mom went out and got our record player fixed. She’s been saying she was going to get it fixed for like 15 years. My dad didn’t really like one of the songs on there.

Yeah, he’s an older gentleman and a lot of the stuff he doesn’t understand. But he’s always like: “The songs have a good beat”. He likes the beats on all of them.

Hear Mr Granduciel’s approved beats in person when The War On Drugs play live over the next week and a bit:

Wagonwheel Blues is out now via Secretly Canadian and is reviewed here. Find the band on MySpace here and get a free download of 'Taking The Farm' here.