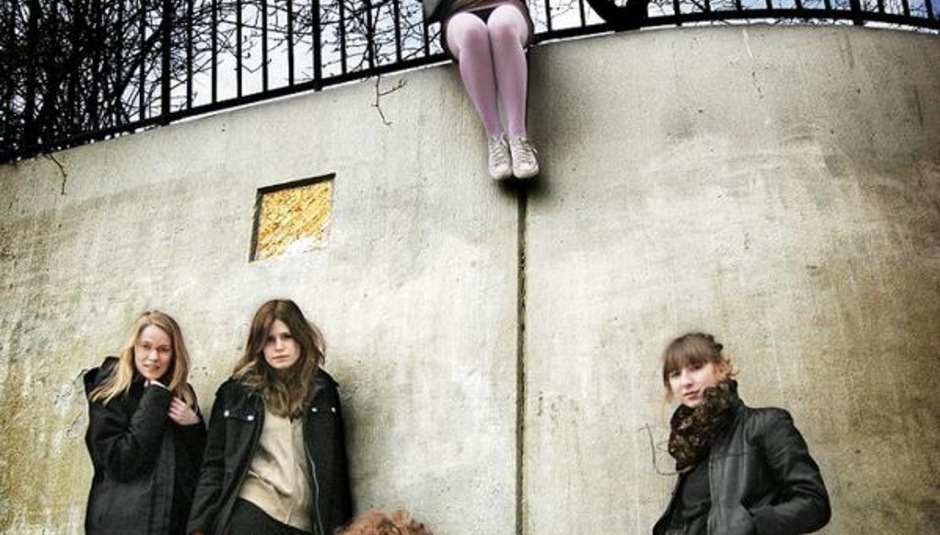 Over the course of one EP and two subsequent singles (alongside a smattering of live performances) Sweden’s Those Dancing Days have established themselves as keen purveyors of sugary Northern Soul-esque pop. Cute, angelic, sweet- all nice words but we here at Drowned in Sound want a bit of edge. We spoke to bassist Mimmi Evrell ahead of the release of the debut LP In Our Space Suits (out October 6th via Wichita) to find out, amongst other things, what makes her and her band tick...


DiS: Hi Mimmi, where in the world are you right now?

I’m in King's Cross in London, I just woke up actually - this is my first interview of the day.

Your album is out soon, can you tell us a bit about it? Who has influenced you on this record?

It’s quite a varied album because none of us really have the exact same taste; we all like different things and different bands. The one band who we all like, who I guess are an influence, is the Swedish band Shout Out Louds. And the Strokes as well. We’ve had the chance to meet Shout Out Louds recently and they are really nice people and really fun to hang out with.

You are all relatively young (18) and female. Have you found people treating you differently because of those factors?

Not so much any more but definitely when we started. We got a lot of things like 'Do you want me to write down the chords for you? Do you want me to tune your guitar for you?' It was so frustrating. I think because we come from Sweden where a lot of band with girls in have come from we get a lot of support. We can always turn to these bands and ask for help.

You are signed to Wichita, can you tell us why you decided to give them your signature?

In Sweden we were signed with Universal alongside Peter, Bjorn and John who are on Wichita here so we got their attention that way. It’s a very good label and we are really happy to be working with them. We all love The Cribs and we got to tour with them, we didn’t know they were so popular here! We got onstage and there were all these people there to seem them, it was such a surprise but a lovely one. I really like Bloc Party too, their new album is very good. We all saw The Dodo’s a couple of weeks ago too and they really impressed us.

Which new albums are you all enjoying at the moment?

I just bought the Fleet Foxes album and I plan on buying The Last Shadow Puppets album too.

Well half of it’s excellent and the other is just a bit rubbish. Are there any new Swedish bands you’d like to recommend us?

There is one band I have heard a bit of called The First Big Kicks and they’re really young, one is fifteen and the other is seventeen I think. I really like them.

The band are about to go on a big promotional tour around Britain and Europe, does the thought of that long on the road scare you at all?

No actually, I’m really excited to get out there and play all the different venues. It’s going to be lots of fun going back to Germany and England and going to places we’ve not been to before.

It depends where we are and who we know there really. We have fun that’s for sure. It’s always nice if people come up to you and you talk about the show and then you go to another bar and then a club... we saw Micachu (and The Shapes) recently that was a good night. The festivals were great as well; we got to be right at the front for Blondie at Latitude.

Do you find much time for exploring the towns and cities you are playing in between gigs?

We have been very bad at going out and looking around places really. We go back to the hotel and take a shower; you never know where your next shower is coming from. We like to go shopping too. The thing is we don’t know the way around a lot of cities so it’s hard to just go and find cool things to do. We are definitely going to try and see more things on this tour though.

Earlier this year your singer Linnea sold the promise of a kiss on Ebay. Can you tell us what happened there? Who won?

Oh no, no - that was some creepy guy pretending to be us.

Really? So that’s not true at all?

No! It was some weird guy who made it all up. I’d like to think our music is good enough on its own and that we have better ways of promoting ourselves than to resort to stupid things like that.

Did you find out who did it?

Some guy in Liverpool? No, Leeds. He was a creep from Leeds.

Are you playing in Leeds on the tour?

I’m not sure, I don’t think so. Have a look on Myspace and see.

We do and they are. November 25th- Leeds Cockpit.

Oh no, we’d better watch our backs. Get ourselves a big bodyguard like Beyonce.

Those Dancing Days are a perfect pop band, towing the line between the mainstream and alternative with style and panache. We recommend you embrace them when they tour the country on these dates.