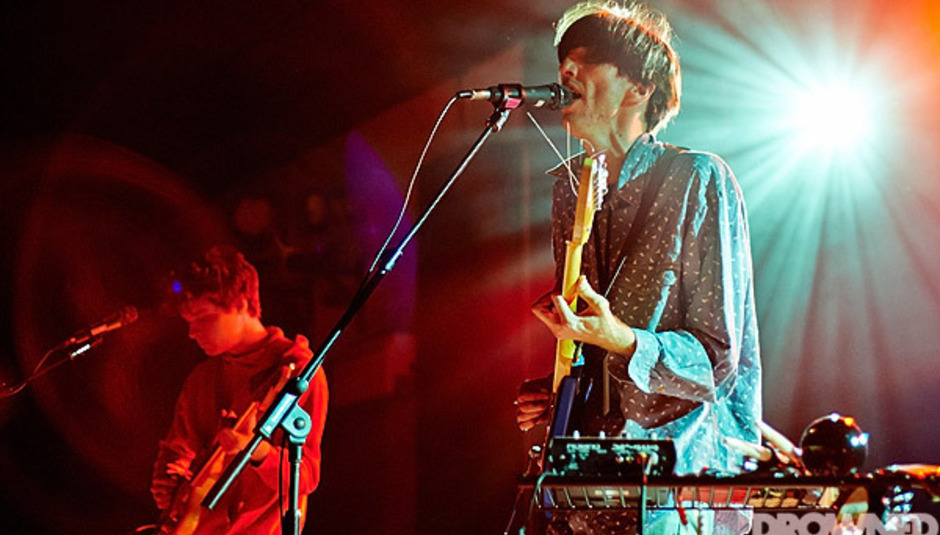 Hello - it's DiS reviews editor Andrzej Lukowski here: before we crack on with alcxxk's highlights of ATP, a few words about Deerhunter, who, er, he didnt see. Deerhunter were fucking immense at their own ATP, in three sets that took in the bulk of their back catalogue. Each night had a different character - Friday's Cryptograms performance was the most primal, the album's ambient midsection jetting past in a roar of sound and light, fiery, unrelenting guitars. Saturday's Microcastles set was hit by a couple of technical errors and perhaps flagged a little in the quiet section, but had the highest highs of the weekend in the form of absolutely fucking ferocious versions of 'Noting Ever Happened' and 'Cavalry Scars II' - between the two of them they must have accounted for over half of the crowdsurfing that's ever happened at an ATP, including - during 'Cavalry Scares' - three fifths of Deerhunter. And Sunday's Halcyon Digest was weird and sad - Bradford Cox talked a lot about his friend Jay Reatard, who inspired the album - and finally cathartic, with the Monomania-based encore ending with a huge version of the title track, augmented by squalls of sax from Verity Susman. Above all, I don't think I've ever seen another ATP curator who gave more of a shit - Bradford was practically omnipresent and if occasionally you felt a little like the rest of the band had been marginalised, then massive, massive respect to bassist Josh McKay, whose covers band the B-53s provided a gloriously unexpected highlight.

Ex Models start their set with an awesome game of FX noise aggression Horse. A dance-off of six-stringed unpleasantness, they take turns out doing each other with feats of guitar anti-heroics. This is followed up with 10 minute long, one riff song introducing Oneida's Kid Millions and his ever-smiling drum virtuosity, and then the whole of their 2005 album Chrome Panthers. It’s thrillingly ahuman, stretches of inhospitable wasteland broken up by occasional drum fills injecting life and personality. If Michael Bay's reading (DiS knows he's a big fan) can you sign these guys up to score the next Transformers film? Inevitable and senseless robotic conflict abounds.

In contrast with many of the older acts here, Tom Tom Club have set their sights firmly on entertaining as best they can. Genial, smiling, bouncy pop and entirely superfluous turntablism) are the order of the day. Soul Covers ('Under The Boardwalk', 'You Sexy Thing'), the hits ('Wordy Rappinghood' and towering highlight 'Genius of Love') and even a run through 'Psycho Killer' give the crowd exactly what they want, and while it’s not the coolest option, it’s a welcome change of pace.

Beginning his set with an extended jam on 'Twinkle, Twinkle Little Star', Lonnie Holley showcases the childlike, awestruck sensibility running though his work, which he juxtaposes with a soulful world-weariness and a stream-of-consciousness preaching over glitching, inelegant VSTs sounding like an underwater gamelan orchestra and the babbling of agitated water, his fingers fluttering exploratively over his keyboard. Between songs, general life advice to the audience turns into free-associated a cappella turns back into music, by turns funny, heart-warming and thought-provoking.

Basinski’s laptop-based set is so monolithically space-occupying that all of the other sounds in the room can’t help but be press-ganged into the drone. From the clanking of change at the bar to the angry barks of security getting people to stop lying in their way, even the room's brittle-toned air con seems complicit. The piece’s eerie, degraded piano figures thrum as such things are wont to, creating an almost floatation tank-like atmosphere.

Dan Deacon routinely delivers live experiences that make you question the point in other bands even turning up. Yes, he achieves this with audience participation, and yes, this is essentially a gimmick, but when you're amongst a crowd who've had their inhibitions so expertly broken down, you'd be an idiot to pretend that you're somehow above it. Thankfully a Sunday evening ATP crowd is free of the standoffish naysayers that can sometimes be found blighting Deacon's London shows. It's this sense of open-minded communality that will be most missed when these holiday camp weekends come to an end in December.

Of course, this would only be so much bullshit if the music didn't live up to it, but it does so easily. Two amazing drummers (including Jeremy Hyman from the sadly defunct, similarly joyful Ponytail) frantically bashing out clattering tribal rhythms; surging synths and interlocking Glassical arpeggios, perfectly executed ecstatic peaks and tense troughs and explosions of noise and joy, all complimented by perfectly synched lighting, acting like as an instrument in itself.

In contrast with a lot of “heritage” acts on the bill, he could play a set entirely of brand new music and, so long as it was so dramatically euphoric, everyone would have just as much fun. Frankly, this shit’s important.

"It's really not that hard to write a...