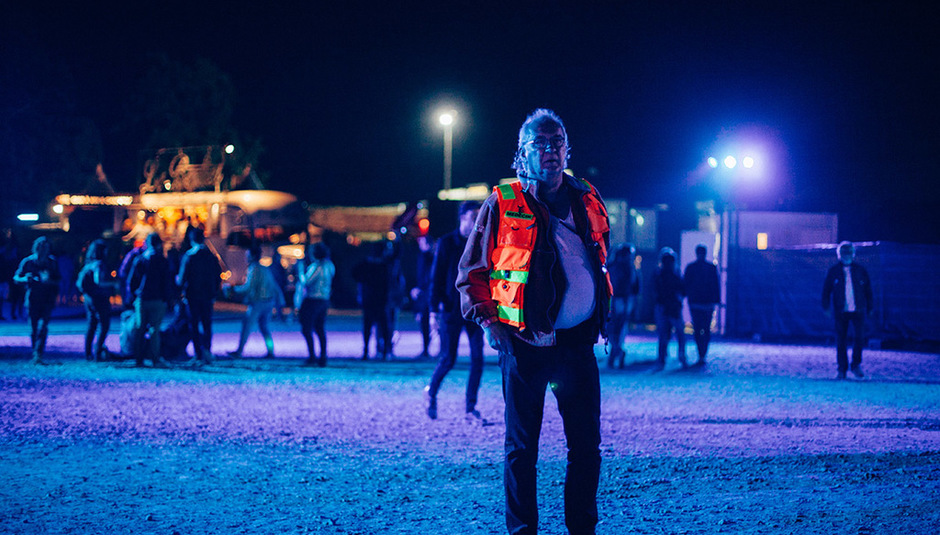 Magic hour, and the shadows are lengthening against the Brittany countryside, the light golden and the air agreeably balmy as we approach the access road for La Route Du Rock. We can see the flags with their distinctive home-taping-is-killing-music design fluttering as our vehicle swerves between the concrete boulders, can feel the bass shudder as we pass the military personnel with their machine guns and their reflective glasses and their steely, hardened gaze. Through the security cordon the car pulls up behind the main stage as a fresh unit marches through one of the access tunnels to the fort, that perfect Michael Bay glow glinting off the barrels of their weapons and their feet seeming to sync in with the rhythms from the speakers. Off to the right a woman sways, glass of wine in one hand and the other held half aloft to the music and they pass her, the machine-precision of their movement starkly jarring with her carefree teeter.

It’s a disorientating thing, being aware of threat at a music festival. These are places that we come to flee the world, to temporarily escape our dispiriting jobs or damp-ridden homes, to get a break from the news sites with their screaming headlines and their terrible statistics. It’s particularly dissonant here in St Malo with its beautiful beaches and stunning walled city, feeling on guard when you should be letting go, but hey - I guess that’s how we live now.

And to be fair this 26th edition of La Route Du Rock, one of France’s premier alternative festivals, still gives plenty of opportunities to let go. From its striking location to its canny curation, La Route stands out within a crowded calendar, a small event - 10,000 people - that feels much bigger, inspiring a loyalty and community amongst attendees that’s evident both from the numbers queuing to buy the branded merch and the enthusiasm of the volunteers that help it to run: 'It’s just really special here', says one a little breathlessly, 'and really exciting to be a part of.' It’s a sentiment repeated often by both those involved in putting it on and many of the artists that grace its stages - that this is a festival concerned with far more than just hitting a bottom line, and one that trades as much on the goodwill and trust associated with its own name as on all those others that appear upon its posters.

Those are some good names on those posters, though, from Belle and Sebastian to Suuns, Lush to Tindersticks to Battles and Pantha Du Prince. But perhaps the best set of the weekend came listed near the bottom: France’s La Colonie De Vacances, playing at the Thursday opening party in a St Malo club. Formed from 11 musicians from four different bands, La Colonie... play a bruising, vigorous post-rock from four separate stages that enclose the audience, who stand pirouetting ceaselessly in a bid to source each riff or beat or vocal or just in a strive to capture an effective panorama. They fail, of course, because a panorama can’t do this justice - and neither frankly can these words, however tempting it is to use them all up in the attempt. Far better just to stress that these people need to be seen, and that whatever it costs to get to France - they’ve never toured elsewhere - to do that is absolutely worth it.

After that it’s a slight comedown having to watch ‘normal’ bands playing on just the one stage, even if those stages are sited against the lapping waves of the English Channel or nestled within the crumbling walls of the 18th century Fort de Saint-Père. New York’s Psychic Ills help us through though, their expansive psychedelia pairing aptly with the burning heat and rising dust of the main festival site, whilst Belle and Sebastian play a charming set as the light fades, filling the stage with audience members to dance through ‘The Boy With The Arab Strap’ whilst mainman Stuart Murdoch reminisces on the evening meal: 'This is the best food we've ever had... I’m sorry - I’ve had two puddings.' He’s not wrong - we traded most of Kevin Morby’s set for the chicken - whilst all around the people clutching champagne goblets or Abbaye beers or plates of gateau remind us that we’re pretty fucking far from the Reading Festival.

That said we’re never too far from reminders of home, with lament for the referendum result coming thick from the many British bands on the lineup. 'I just wanna say - really sorry about Brexit,' says Lush singer Miki Berenyi, whilst Sleaford Mods’ Jason Williamson sneers that 'Little England thinks it's better than you... I'd like to apologise for Little England.' Minor Victories express their regret with almost the same fervour that Stuart Braithwaite expends attacking his guitar, although they never quite gain the volume to fully excoriate, their songs melding a touch too much to properly impact.

No such problem for Germany’s Pantha Du Prince: the bass alone does permanent damage, shivering the shin as much as the warped vocals and chilly soundscapes and early morning air. Similarly bracing are Canada’s Suuns, their set a fantastically misanthropic array of jabbing riffs and throbbing synths and hypnotic, looping drums, Ben Shemie’s serial-killer vocals coiling and suffocating like a python. Having seen them playing clubs it’s weird to watch Suuns driving such a massive crowd, each song met with a rapture more befitting of arena anthems than these barbed and tricksy structures, but it’s a great show nonetheless. Ditto Battles, their Pythagoras rhythms not particularly a natural fit for a 3am festival crowd but killing it here, each loop and fretboard scrape and massive Stanier beat eliciting more frenzied screams from a crowd that moves as one.

That frenzy spills over into Sunday with Fat White Family and Savages commanding a double-header of rage and sweat, compounding the tinnitus left over from Fidlar with swagger and sleaze and menace and volume. And whilst Savages might still be a little one-note when that note ends on ‘Fuckers’ it’s impossible to dismiss, the feedback pealing and the snarl intense and the adrenaline from its final build-and-release almost - almost - enough to let us forget that The Avalanches were due to be following them until they had to cancel all their summer dates. Instead we get the Sleaford Mods on magnificently sweary form, their music coarse but their stage presence undeniable and their very English humour a surprising win with the French crowd: 'Are you enjoying it? I know we're only three songs in but it seems like three hundred fucking years to us. And I need a shit...'

Well, that will have been the desserts. And to be fair two days on, nowhere near enough sleep and a comedy Channel crossing later and I am still thinking about them, wistfully, as well as La Route generally - it’s a lovely festival that gets everything right, from the fine honing of its lineups to the beauty of its locations. It’s rare to come back from a weekend of music and feel anything but bruised and worn - we’re so used to festivals being an endurance as much as an experience - but this one, more than any other that I’ve attended all over the world, feels like a holiday, in glorious spite of those real-world issues trying to nudge their way in at the edges.